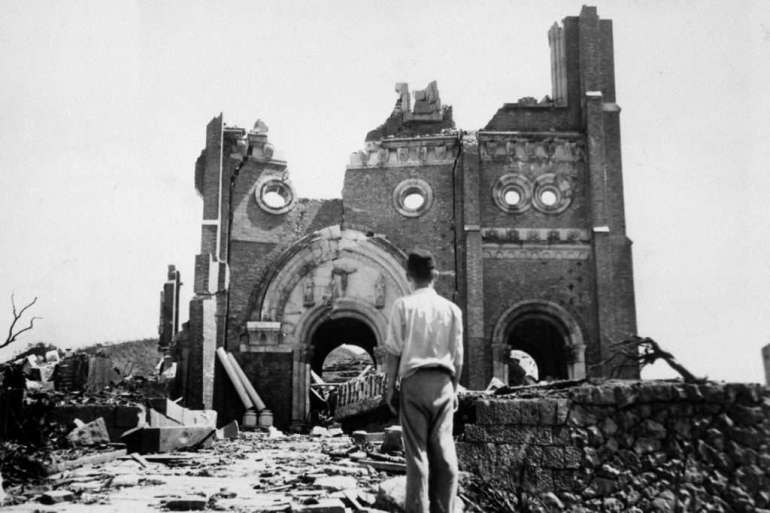 At the event at Nagasaki Peace Park, scaled down because of the coronavirus pandemic, Mayor Tomihisa Taue read a peace declaration in which he raised concern that nuclear states had in recent years retreated from disarmament efforts.

Instead, they are upgrading and miniaturizing nuclear weapons for easier use, he said. Taue singled out the U.S. and Russia for increasing risks by scrapping the Intermediate-Range Nuclear Forces Treaty.

“As a result, the threat of nuclear weapons being used is increasingly becoming real,” Taue said. Noting that the Nuclear Proliferation Treaty entered into force 50 years ago, Taue urged the U.S. and Russia to show a (asterisk)workable way(asterisk) towards their nuclear disarmament at the NPT review process next year.

He said that “the true horror of nuclear weapons has not yet been adequately conveyed to the world at large” despite struggle and efforts by hibakusha, or atomic bombing survivors, to make Nagasaki the last place of the tragedy.

He also urged Japan’s government and lawmakers to quickly sign the 2017 Treaty on the Prohibition of Nuclear Weapons.

After taking part in the ceremony, Prime Minister Shinzo Abe criticized the treaty for not being realistic. None of the nuclear states has joined, and it is not widely supported even by non-nuclear states, he said.

“The Treaty on the Prohibition of Nuclear Weapons was adopted without taking into consideration the reality of the harsh national security environment,” Abe said at a news conference. “I must say the treaty is different from Japan’s position and approach” even though they share the same goal of abolishing nuclear weapons, he said.

Abe has repeatedly refused to sign the treaty. He reiterated that Japan’s approach is not to take sides but to serve as a bridge between nuclear and non-nuclear states to encourage dialogue to achieve a total nuclear ban. Survivors and pacifist groups say Japan is virtually siding with the U.S. and other nuclear states.

Abe cited “severe national security environment and a wide gap between the two sides on nuclear disarmament.” He also noted Japan faces threats of development and modernization of nuclear weapons from “neighboring countries in the region.”

Taue, who spoke before Abe, disagreed, saying: “Among the nuclear-weapon states and countries under the nuclear umbrella, there have been voices stating that it is too early for such a treaty. That is not so. Nuclear arms reductions are far too late in coming.”

While Tokyo renounces its own possession, production or hosting of nuclear weapons, as a U.S. ally Japan hosts 50,000 American troops and is protected by the U.S. nuclear umbrella. The post-WWII security arrangement complicates the push to get Japan to sign the treaty as it beefs up its own military to deal with threats from North Korea and China, among others.

An aging group of survivors have expressed a growing sense of urgency to tell their stories, in hopes of reaching younger generations to continue their effort toward establishing a nuclear-free world.

“There is not much time left for us survivors,” said Shigemi Fukabori, 89. He was a 14-year-old student mobilized to work at a shipyard when Nagasaki was bombed.

“I’m determined to keep telling my story so that Nagasaki will be the last place on Earth to have suffered an atomic attack.”

Fukabori, who almost instantly lost four siblings, said he never forgets the pile of charred bodies, bombed-out street cars and the badly injured desperately asking for help and water as he rushed back to his house in the back of the Urakami Cathedral, which was also nearly destroyed.

“We don’t want anyone else to have to go through this,” he said.

“Nagasaki bears a responsibility as a witness of catastrophic results the nuclear weapon caused to humanity and environment,” Fukabori said in his speech at the ceremony, representing the Nagasaki survivors. “I hope as many people as possible to join us, especially the young generations to inherit our baton of peace and keep running.”

Many peace events, including survivors’ talks leading up to the anniversary, were canceled because of the coronavirus, but some survivors have teamed up with students and pacifist groups to speak at online events.