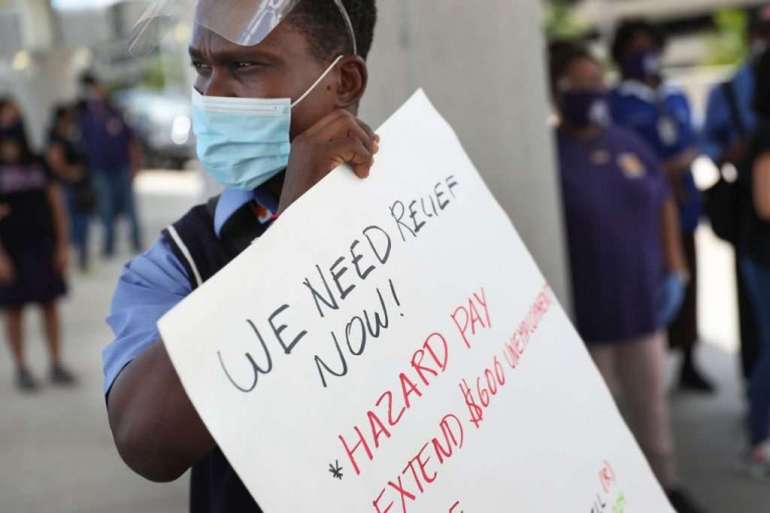 Unemployment insurance added about $25 billion a week to the economy during the four months the additional aid was in place, and now since the expiration of the extra benefit, it’s running closer to $10 billion, former U.S. Treasury economist Ernie Tedeschi said. That’s going to have “devastating individual implications for the families that receive that payment and also going to have economic implications for America as a whole,” he said.

“When you have $60 billion less going to families,” Tedeschi added, “that means that there’s going to be something close to that less in spending.”

With less money to spend on groceries, gas and other goods, the lapse of federal pandemic aid has aggravated the labor market outlook. Businesses acutely affected by consumption have started hiring fewer workers, according to Nick Bunker, economic research director at Indeed Hiring Lab. Listings for jobs in beauty and wellness seeking workers like hairdressers, nail technicians, fitness instructors and cosmetologists are falling, as are those for retailing and delivery drivers and truckers.

The number of job listings posted in the week ending Aug. 14 were 20 percent lower than they were at this time in 2019 — and the first drop the website has seen since late April, according to Indeed.

“Really the last few weeks we’ve started to see a significant slowdown in the trend in job postings,” Bunker said.

Hiring, hours worked and the number of employees working over the last six weeks — a period that began before the extra unemployment aid ended on July 31 — has slowed down or flatlined, according to data from workforce management platforms Kronos and Homebase.

At the same time, the number of jobless claims rose to 1.1 million in the week ending Aug. 15, halting several weeks of decline and suggesting that large numbers of people are still being pushed out of work due to the pandemic.

Economists say the July-to-August plateau is especially concerning because jobs usually pick up this time of year due to increased demand in the summer season.

“We’re expecting the next few months to be — even barring a significant recurrence of some Covid hot spots — a very slow recovery,” said David Gilbertson, vice president at Kronos.

Republican lawmakers have argued that the $600-a-week boost allowed many laid-off workers to make more money at home than they earned at their previous jobs. That, they said, was creating a disincentive for them to return to work and slowing down the economic recovery.

But the lack of a pickup in business activity is “a warning sign,” said Ray Sandza, vice president of data and analytics at Homebase. “Any expectation that removing [unemployment insurance] benefits was going to suddenly fill a bunch of jobs was, predictably, misplaced,” he added in an email. “There just aren’t enough jobs to go around right now; it’s not a supply issue.”

According to the Real-Time Population Survey, which was created by researchers at Arizona State University and Virginia Commonwealth University, the unemployment rate was 15.5 percent in the week ending Aug. 15.

“There was a really rapid recovery going on in May and June, and then since June things still have been modestly getting better but just at a much slower pace,” said Adam Blandin, assistant professor of economics at VCU, who helps develop the real-time survey. “And between the new virus cases and the changes in policy … the million dollar question is are we going to stay at something above 10 percent unemployment, for a long period, or is it going to continue to go down like it did early in the summer?”

Without another stimulus deal from Congress and less money for Americans to spend, companies are unlikely to risk expanding their workforce, meaning fewer jobs available for laid-off workers to fill and tamer growth in the economy.

“Consumers are not spending money, at least in some sectors,” Gilbertson of Kronos added. “The face of our economy is changing.”

Until businesses are confident that Americans will start spending more, “they’re probably not going to be expanding their hiring,” he said.

The latest news in employment, labor and immigration politics and policy.

The stock market’s robust performance isn’t doing much to spur lawmakers into agreeing to provide more relief. While fears of a slowdown led shares to plummet in March — and motivated Congress to take sweeping action to rescue the economy — the precarious state of the nation’s workforce now hasn’t generated a similar reaction.

While jobless Americans are facing dire economic conditions, Wall Street has gained back all the losses it suffered early on in the pandemic. The S&P 500 has been hitting record highs.

Even a slide in share prices at the opening bell Thursday, in response to newly rising unemployment claims, was short-lived as prices recovered by midday.

The stock market also isn’t representative of most Americans, especially the low-wage workers hit hardest by the recession. While about half of American families own stocks, the vast majority of the value of shares is held by wealthier investors.

The stalemate in Washington over how much additional Covid-19 aid the federal government will offer to help struggling businesses and Americans has also clouded the outlook for large companies, many of which have done considerably well during the pandemic.

When Walmart touted its second-quarter profits during its quarterly earnings call on Aug. 18, it cited spending “aided by government stimulus.” But Brett Biggs, the chief financial officer and executive vice president, said sales began to revert back to normal toward the end of the quarter when $1,200 stimulus checks the government had doled out to millions of Americans ran out.

“There’s just a lot of uncertainty right now and so much variance in how customers are feeling about their situation,” said Douglas McMillon, Walmart’s president and CEO, during the call.

Target, bracing for an additional drop in expected fall demand because of schools switching to remote learning, has offered to extend its back-to-school season.

“It’s a very challenging environment for us to provide guidance,” Brian Cornell, the chairman and CEO of Target, said during the company’s earnings call Wednesday. “We’ve got the pandemic in front of us. We’ve got uncertainty about back to school, back to college, the state of the economy.”

Now that laid-off workers are no longer receiving the extra $600-per-week unemployment payment, Behnaz Mansouri of the Unemployment Law Project, which provides services to laid-off workers in Washington state, says her clients are facing more difficult choices than they encountered at the beginning of the pandemic.

The year “has been made bearable by this patchwork of financial assistance,” Mansouri said. “And now without it, I fear, it’s going to become unbearable.”

“I’m hearing a lot of people struggling to assess their living situations over the next couple of months,” she added. “Do they potentially start looking for jobs, even if they’re in a high risk category or live with someone who’s in a higher risk category?”

Kellie Mejdrich contributed to this report.