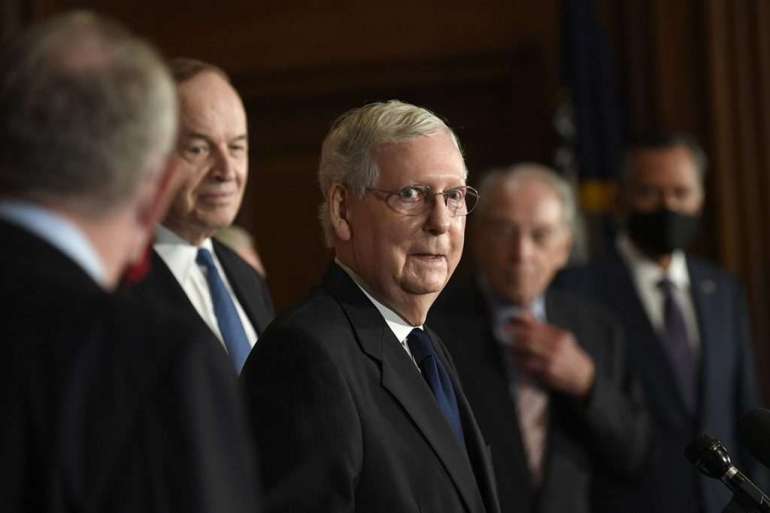 The GOP Senate’s current relief package is expected to cost less than the measure they proposed in July, and includes a weekly $300 boost in federal unemployment benefits until the end of December, liability protections, another round of payments for the Paycheck Protection Program and $105 billion for education, according to a draft of the legislation that circulated last week. The lower price tag on the “skinny” bill could win over some Republican senators who were wary of the GOP’s $1 trillion July plan.

Senate leadership is whipping the new proposal. On a call Friday morning, Senate Majority Leader Mitch McConnell (R-Ky.) told members the Senate would not be returning next week to vote on the measure. The Senate is scheduled to return to Washington Sept. 8, after Labor Day.

Sen. Richard Burr (R-N.C.) told reporters Friday that he expected the caucus to vote on the skinny bill once they reach an agreement. But he also acknowledged that Democrats are all but guaranteed to block it.

“We’ll get a deal. It’s just a question of when we vote on it,” Burr said. “The unfortunate thing is, Speaker Pelosi has made it clear she’s not gonna be supportive of anything, so it probably will fail in the last cloture vote.”

The White House and Democratic leadership have made little to no progress on a deal over the August recess. The key sticking point in negotiations remains the price tag. Senate Republicans and the White House have wanted to keep any next package around $1 trillion, citing concerns about the deficit. But Democrats are insisting that the White House will need to up its offer if they want to get back to the negotiating table.

Earlier this month, Democrats offered to take there offer down $1 trillion from the nearly $3.5 trillion that’s included in the House-passed HEROES Act if Republicans came up by $1 trillion, but the White House rejected the proposal. Speaker Nancy Pelosi (D-Calif.) said Thursday that Democrats were willing to go down to $2.2 trillion.

In a sign that no progress has been made, Pelosi said Thursday after speaking with White House chief of staff Mark Meadows that the administration “continues to disregard the needs of the American people as the coronavirus crisis devastates lives and livelihoods.”

The stalemate in negotiations comes less than 70 days before the Nov. 3 election. Meanwhile, coronavirus cases are showing no signs of letting up, with more than 180,000 American deaths from the disease and nearly 6 million cases. The economy is also showing little sign of improvement, with 1 million people applying for unemployment insurance last week.