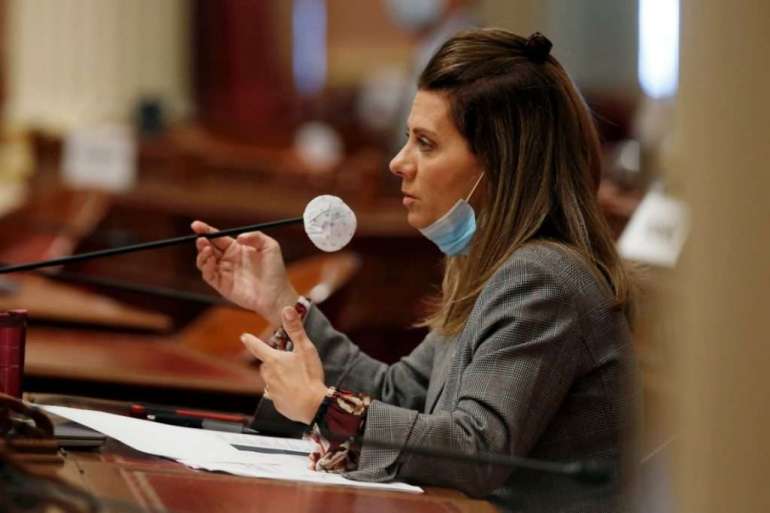 Some observers wondered if Melendez mistakenly let the critique slip by forgetting to mute her computer — a new political hazard in the pandemic. She was scolded by a Democratic colleague for using profanity.

But Melendez doubled down in a tweet soon after.

“Senate Democrats just voted to limit the number of speakers on a bill to only two speakers. This silences the voices of millions of people so democrats have enough time to pass their crappy bills before midnight. This is outrageous and is COMPLETE BULLSHIT,” Melendez wrote in the post.

After an hour-plus delay, Democrats rolled back the rule — and then bills started dying for lack of time as the clock ran down.

The delayed end of session distilled an unprecedented, unpredictable year in which outbreaks twice robbed lawmakers of voting time and remote voting became a flash point for the legislators. It left lobbyists unsure how to push for or against bills without handshake deals or hallways encounters. Dozens of major, long-pushed bills died in the final days and hours of the session.

Floor speeches sped up or vanished altogether as word came from leadership to make hard choices. Democrats accused Republicans of intentionally stalling. There was an actual, NFL-style instant replay review to see if the Assembly sent the Senate a bill before midnight.

And in the waning moments, Assemblymember Buffy Wicks appeared on the floor with her crying, 1-month-old daughter Elly after being denied the right to vote by proxy.

“Please, please, please pass this bill,” she said as she held her swaddled child. “And I’m going to go finish feeding my daughter.”

After a long debate and multiple votes, lawmakers did as Wicks exhorted them to and passed a fiercely contested housing bill — but it was too late. The Assembly acted with only minutes to spare, leaving no time to send the measure to the Senate for final approval. Senate President pro tem Toni Atkins (D-San Diego) was not pleased her bill had withered for lack of time.

“To send over S.B. 1120 at 11:57 — that was impossible, and those votes were there days ago,” a weary Atkins said some time after 2 a.m., decrying the “the absolutely needless delay of housing bills.”

The housing measure wasn’t the only one to fall for lack of time. Major criminal justice reform bills introduced in the wake of George Floyd’s death never got floor votes. Law enforcement opponents successfully ran out the clock on a bill to decertify police officers who break the rules — ignoring a late lobbying push by celebrities like Kim Kardashian West — and a measure to restrict the use of rubber bullets and tear gas.

Lawmakers did send Gov. Gavin Newsom a police shooting bill that would have the California Department of Justice investigate slayings, rather than local prosecutors — the type of independent investigations that advocates have sought for years. Similar California bills withered in recent years, but in a sign of national momentum this year’s version sailed through easily. And in a reminder of the final night’s chaos, it didn’t even get a debate before final passage.

California also acted to avert a looming eviction avalanche. A little more than 24 hours before a court-ordered evictions halt was set to expire, Newsom signed a bill that would prevent tenants from being evicted through the end of the year if they can come up with 25 percent of their rent. After that, landlords would be able to sue for what they are owed. The stopgap measure satisfied virtually no one, and California is now counting on federal help from a Biden administration.

All of that unfurled against a backdrop of hot mics and mounting frustration. Homebound Senate Republicans could repeatedly be heard commenting on the action — one shouted “aw, c’mon” when a colleague switched his vote. “Hear that, honey? She’s appalled,” another sarcastically commented to someone off-screen after another senator’s rebuttal. A third Republican could be clearly seen mouthing a four-letter word as he struggled with the mute button.

The final stretch exposed fractures in how legislative leaders tried to manage governing in a pandemic. The Senate long ago concluded remote voting was constitutionally sound and authorized it, allowing Republicans to participate. The Assembly thought otherwise, worrying about legal challenges invalidating votes — and then Speaker Anthony Rendon faced a backlash for not extending a limited proxy voting system to Wicks, concluding the new mother was not sufficiently at-risk.

Rendon said in an interview Tuesday that Wicks was denied that right because she didn’t meet the terms of a proxy vote system that was written as narrowly as possible to avoid legal challenges. And Rendon said he was “quite worried” about a constitutional complaint invalidating bills the Senate passed with remote votes.

“I think a challenge is inevitable,” Rendon said.

And a rocky finale could lead to some bruised feelings. Republicans revolted against what they called Democratic attempts to silence them; Democrats shot back that Republicans were intentionally stalling. Inter-house animosity intensified as the Senate and the Assembly accused one another of holding bills hostage. As the hour got later and then earlier, the callouts became less subtle.

“Democracy is a team sport,” Sen. Nancy Skinner, a Democrat, tweeted in a thread accusing Republicans of recklessness in contracting the virus and bad faith in how they reacted. “The Legislature is a team sport. One of the teams is acting out and undermining the People’s Business. It’s bad sportsmanship, and it’s wrong.”