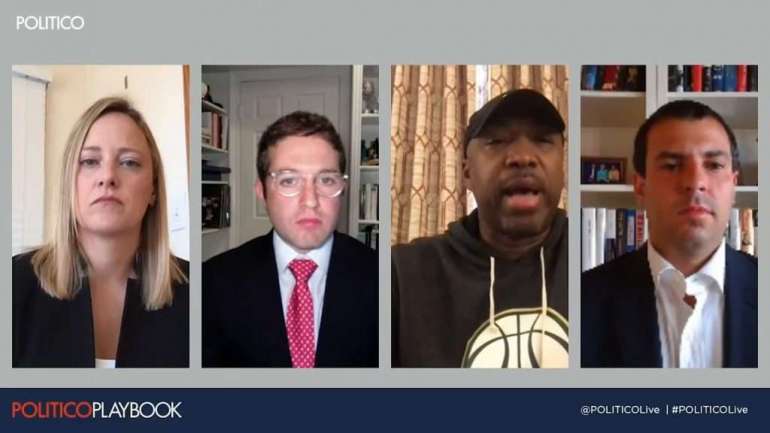 The NBA subsequently postponed its three playoff games scheduled to take place that day as players around the league also refused to take the court in protest against racial injustice and police brutality.

Kushner, President Donald Trump’s son-in-law, was dismissive of the players’ actions in an interview last Thursday with CNBC.

“Look, I think that the NBA players are very fortunate that they have the financial position where they’re able to take a night off from work without having to have the consequences to themselves financially,” Kushner said. “So they have that luxury, which is great.”

Kushner said that “there’s a lot of activism” within the NBA and that the league had “put a lot of slogans out,” but argued that “what we need to do is turn that from slogans and signals to actual action that’s going to solve the problem.”

Trump has also been intensely critical of the NBA, calling the league “highly political” in a tweet Tuesday morning.

“Basketball ratings are WAY down, and they won’t be coming back,” he wrote. “I hope football and baseball are watching and learning because the same thing will be happening to them. Stand tall for our Country and our Flag!!!”

Bucks senior vice president Alex Lasry told POLITICO on Tuesday that the White House had not reached out to the team, and he said Kushner’s were a “little ironic, coming from him.”

“This wasn’t anyone taking a night off and then just going back to their hotel room being like, ‘Eh … I just didn’t want to play today,” Lasry said.

“This was a statement. And this was an act to say, ‘Hey, enough is enough, and if you guys aren’t going to take this seriously, then we’re going to have to do something to bring this to the forefront again and hopefully force people to act.”

The White House did not immediately respond to a request for comment on Baker’s and Lasry’s remarks.

Lasry also referenced Bucks players’ demand that the Wisconsin legislature reconvene to address matters of race and policing — taking aim at state lawmakers for what he described as an insufficient response to the country’s crises.

“We’re in the middle of a pandemic and a civil rights movement going on, and our legislature hasn’t done anything in four months,” he said.

On a national level, Lasry said the United States needed a president who is “not inflaming tensions and pouring more gas on the fire,” and “someone who actually would be a calming and uniting force.”

He urged Congress to approve the George Floyd Justice in Policing Act — which passed out of the Democratic-controlled House in June — and said “it would be great to have people” in the nation’s capital “who understand, ‘Hey, there is a problem here, and what can we do to fix it?’”

“Kushner hits our guys for boycotting one game, and the people in Washington aren’t really showing up for work for any of their days,” he said. “So imagine how that would be if the NBA just decided not to show up to work.”

Still, Lasry said it is evident “how powerful” the players’ protests have been.

“The prescient decided to tweet about it, and the White House is commenting on it. So clearly, we got some people’s attention.”