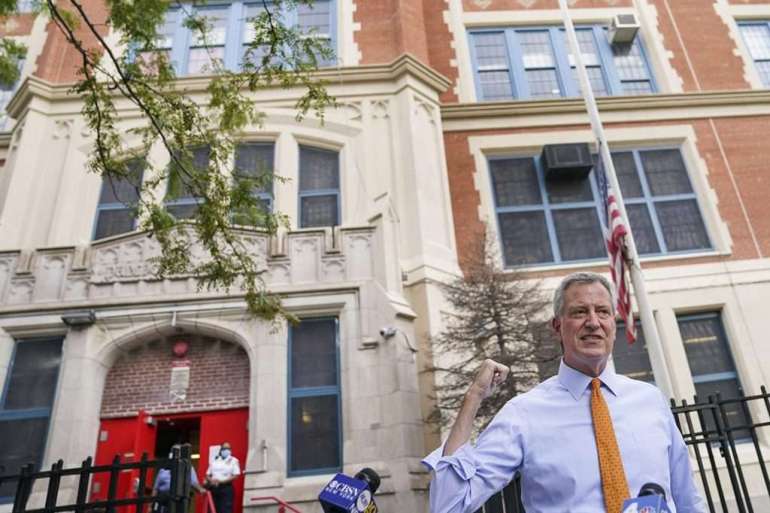 But the lack of any real support for his schools reopening plan is based on more recent history: a series of missteps in how schools responded to the Covid-19 pandemic and little transparency on how the city planned to keep kids, teachers and administrators safe in the coming school year.

One source familiar with the negotiations around reopening said de Blasio made up his mind Tuesday morning, only hours before he told the press.

“The mayor staked out a position early, a legacy position, and did not want to let the reality on the ground change that stance,” the source said. “He saw his staff who said the schools needed to close in March as defeatist, and those who said the schools were not ready to open in September as obstructionist. It was never about policy — it was about psychology, the mayor’s psychology.”

City Hall referred POLITICO to comments the mayor made Tuesday.

“We agreed with our labor unions who represent the folks in our school system to hold back for that 10-day period so we could have some extra preparation in place, both educationally and in terms of the health preparations,” de Blasio told CNN.

A litany of missteps

The de Blasio administration, as well as Gov. Andrew Cuomo, spent the early part of March insisting New York was capable of handling the virus and resisting calls for widespread school closures even when it became increasingly clear their initial projections were wrong.

The shutdown order did not come until March 15 and the United Federation of Teachers, the city’s teachers union, has said the delay —  along with a demand that teachers show up to school buildings for three days of training for remote learning, and scant communication about how quickly the coronavirus had already spread — contributed to the deaths of at least 75 school-based employees and countless cases of the virus.

“What happened in March cannot happen again inside this city,” UFT President Mike Mulgrew said late last month. “We are not going back to hell because of short-sighted political agendas.”

When schools switched to remote learning, the city never really got its arms around the operation. Roughly 300,000 students were without access to modern computers or reliable internet service. Parents were juggling their own jobs while becoming part-time teachers, families were cramped into tight quarters, some sharing computers, and older children were drafted to tutor their younger siblings.

“The difference between the bromides coming out of City Hall and the lived experience of parents and children is extraordinary,” said David Bloomfield, an educational leadership professor at Brooklyn College and the CUNY Graduate Center. “I think there’s been a singular lack of leadership and vision, as well as planning ability.”

While the city eventually gave internet-enabled iPads and other devices to the families in need, some said they either came late, didn’t arrive at all or were faulty. Many were instructed to return their devices when the school year ended, creating further questions as students transfer to different schools and families’ circumstances change.

Those challenges continued into the summer. By the time virtual summer school ended, nearly a quarter of those who were supposed to participate never logged on, leaving thousands short of graduation or further behind their peers.

The city recently said the tablets it handed out in the spring will now become hotspots so families can have better internet access. But many say they still have little assurance from the city on how distance learning will play out better under either blended learning or the wholly remote learning option this fall — almost 40 percent of families have opted to not return to school buildings at all.

“The lack of clarity about how this is going to work, the lack of details, is undermining trust,” said Phoebe Boyer, the head of the non-profit organization Children’s Aid. “We have to be as committed to the remote support systems as we are the in-person supports because no one is going to be in-person 100 percent of the time.”

The mayor in May convened an education advisory council composed of college presidents, union leaders, public and private school officials and child care representatives to guide the city’s reopening strategy. Multiple members of the 45-person panel interviewed by POLITICO said it was unwieldy, set up in a way that made substantive, discussion difficult and it was unclear how much of the council’s input was utilized.

“He pulled together this group,” said Andrea Anthony of the Day Care Council, one of the participants. “Did they get good advice? I’m sure. Did he listen? No. He went off and did what he wanted to do, like he always does.”

The mayor and Schools Chancellor Richard Carranza on Aug. 27 put forward details on how schools and teachers are to juggle having multiple cohorts of students learning under two different educational models, neither of which had any large-scale application in New York City public schools prior to the pandemic.

But the announcement put few at ease, as staffing concerns at many schools threatened to poke holes in those plans.

“We tried to accommodate as best as we can during the virtual platform but I think the face-to-face and live instruction is obviously the best way to do it,” said José Vilson, a math teacher at I.S. 52 in Inwood. “We can’t do that if we have all these things happening at the same time.”

Perhaps an even bigger sign the mayor’s plan was unwinding was the growing number of principals who publicly called on the city to delay reopening. In contrast to the teachers union, administrators typically stay out of the fray, and the mayor could not as easily dismiss their concerns as a political power play.

“We’re sick to death of being thanked and being called heroes,” said Julie Zuckerman, principal of Castle Bridge School in Washington Heights. “We’re not heroes. We’re trying to do a job.”

The mayor’s attempts to allay criticism were met instead with more, as time ticked away toward September and students, parents, teachers and principals grew more restive as it appeared few detailed plans had been developed between March and August.

After dismissing outdoor schooling for months, de Blasio last month announced it would repurpose outdoor spaces for students, only to leave many of the details up to individual schools. The move was met with concerns about exacerbating inequality from those whose schools are in potentially unsafe neighborhoods and Carranza’s suggestion that well-to-do PTAs could assist other schools’ to purchase protective barriers was pilloried as naive.

“There’s such a lack of confidence in everyone that’s involved in school reopening, and almost a willful ignorance in what still needs to be done,” said state Sen. Andrew Gounardes (D-Brooklyn) before the mayor’s announcement.

The perils of remote learning

While de Blasio has faced a mountain of criticism over his haste to bring back in-person instruction, few educators would argue with his reasoning: Remote learning is a poor substitute for in-person schooling, for a variety of reasons.

“I have not heard a single educator say our kids can get the same education, as good an education solely from remote,” de Blasio said Monday night, hours before he changed course, during an appearance on NY1. “I haven’t heard any of them say that our kids who are remote will get the same mentoring and counseling and mental and physical health support as the kids who come into a school building.”

And the prospect of many private schools and some charter schools holding classes in-person five days a week for all their students, as they plan to do, while city-run schools are run entirely online would only lay bare the stark inequities de Blasio has vowed to close.

Indeed, the city’s transition to remote learning immediately revealed the disparities that plagued the system even before the pandemic hit the five boroughs.

Low-income families and vulnerable populations whom the city long struggled to meet mandated education standards, such as students with disabilities, English language learners, immigrants, and homeless students have pointed to a lack of reliable access to internet and other technology, not receiving services and information in their languages and insufficient outreach. Some families also said their schools didn’t offer live instruction, limiting students’ engagement with their classmates.

But with that in mind, many school officials and observers questioned why, if the mayor was so adamant about getting back in the classroom, didn’t he have a more detailed plan to manage one million students across 1,800 facilities.

“All of a sudden the plan comes, and there’s so many things lacking, and so many things that are outstanding,” Gounardes said. “It feels like we’ve wasted time.”

It’s a lament shared by educators, families, union leaders and elected officials, many of whom had been urging the city to kick off the planning process early, given the city’s missteps when closing the school system this spring, despite the mayor’s protestations that they have been preparing for the fall for months and seeking input from all sectors of the education world.

De Blasio’s insistence on reopening the school system was also one of the final straws that precipitated the resignation of Health Commissioner Oxiris Barbot, who reportedly felt that automatically closing a school if at least two students in separate classrooms tested positive was not the best way to contain the virus.

And while the city has heeded the request to delay reopening, some say glaring questions remain.

Council Member Treyger called the city’s testing strategy “vague” and said there are still questions about how a school reports and confirms a positive case of Covid-19, and he’s not certain all students will have sufficient access to the technology they need.

“I was not aware of this agreement until this morning,” he said. “I will tell you it will generate a lot more questions and they’re already coming in.”