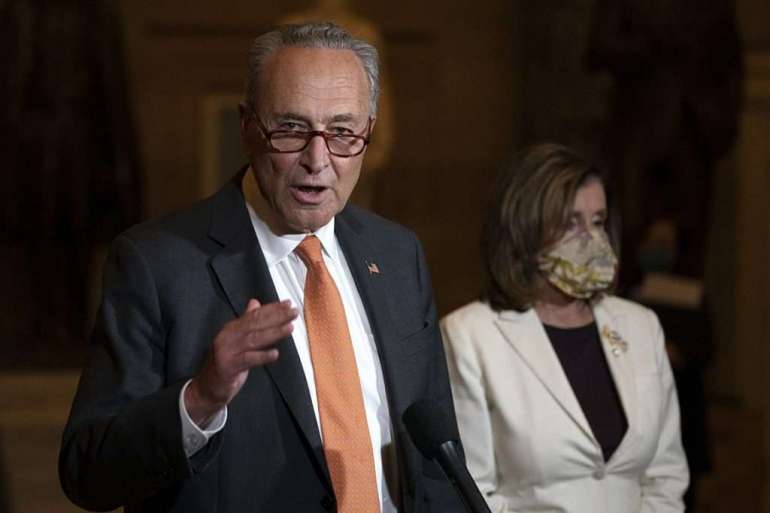 “Republicans may call their proposal ‘skinny,’ but it would be more appropriate to call it ‘emaciated,’” the New York Democrat wrote. “With no money for rental assistance, no money for nutrition assistance, and no money for state and local services, the census, or safe elections, Leader McConnell and Senate Republicans would be making another unacceptable and ineffective attempt at providing relief.”

The new Senate Republican proposal is expected to include $300 in boosted weekly federal unemployment benefits through the end of December, another round of funding for the Paycheck Protection Program for small businesses, $105 billion for education, and liability protections for companies, schools and health care providers amid the pandemic, according to a draft. The bill would also provide billions to the U.S. Postal Service by converting an existing loan into a grant.

Earlier this summer, Covid cases were dipping and states started reopening. Weeks later, there was a resurgence. Trump is now looking at a repeat of that situation — just two months ahead of the election.

Senate Republicans have previously been somewhat divided on a relief plan, but GOP leaders are growing confident their bill will garner 51 votes from the 53-seat GOP caucus and increase pressure on Democrats to cave. Some Republican aides say the measure could also be attached to a continuing resolution to fund the government past Sept. 30.

But Schumer and Speaker Nancy Pelosi (D-Calif.) have repeatedly rejected a “piecemeal” approach to coronavirus relief. And any such legislation will need 60 votes, including backing from some Democrats, to advance in the Senate — an unlikely outcome.

The biggest sticking point in relief talks remains the price tag. The White House and Senate Republicans are insisting on a package costing no more than $1 trillion, citing concerns about the federal deficit. Democrats initially pushed for a nearly $3.5 trillion bill passed by the House in May, but say they are now willing to come down to $2.2 trillion in an attempt to meet the GOP halfway.

In his letter Thursday, Schumer blamed Republicans for the stalemate and argued the White House “has refused to make any significant compromise.”

“President Trump, led by Chief of Staff Mark Meadows, has embraced a hardline view that the federal government should be doing less, not more, during this time of national crisis,” Schumer wrote. “Based on their self-described lack of urgency, the continued division of their caucus, and this most recent inadequate proposal, it is clear Republicans are trying to ‘check the box’ and give the appearance of action rather than actually meet the truly profound needs of the American people.”

Meanwhile, more than 180,000 Americans have died from the coronavirus and millions are unemployed.

Schumer concluded with a call to his caucus to stay united, as it did during negotiation of the $2.2 trillion measure passed in March.

“It was our unity against a partisan, Republican first draft that allowed for significant improvements to be made; improvements that have benefited millions upon millions of Americans and helped our economy,” Schumer wrote. “We should strive for, and hope we can achieve, another comprehensive, bipartisan bill that meets the moment facing our nation.”