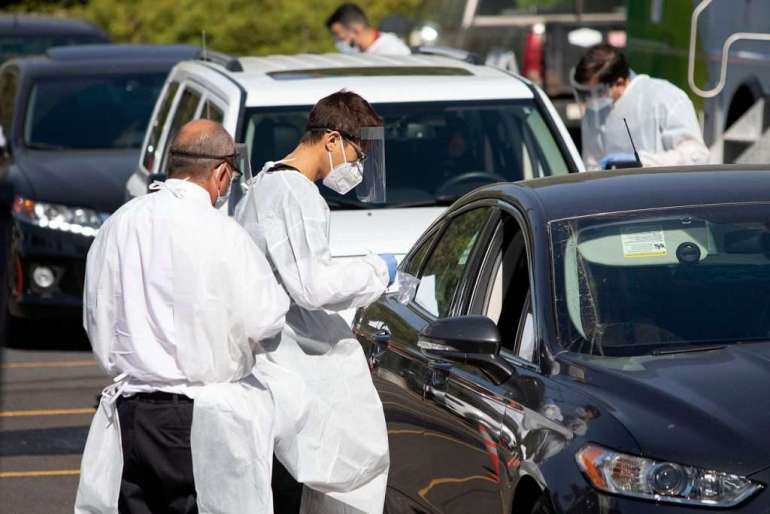 At the same time, White House officials have renewed calls for reopening schools and downplayed the threat for the young and middle-aged, effectively urging the majority of Americans to learn to live with the ever-present risk of infection.

“We have to look at the data and understand that the schools are a very low-risk environment,” Atlas said Monday.

The White House in recent weeks has touted the recent slowdown in daily Covid-19 deaths and hospitalizations, even though the U.S. adds roughly 40,000 new cases a day — almost twice the amount seen just a couple months ago.

Some administration health officials have defended the testing strategy shift as a precursor to the next phase in test development, with tens of millions of rapid coronavirus tests expected to hit the market in the coming months.

The federal government plans to start distributing some of the Abbott rapid tests it purchased in mid-September to assisted living facilities and home health staff. Historically Black colleges and universities will also receive some of the new supply.

But the “overwhelming majority” of the new rapid Abbott tests are being sent to individual states, leaving it up to them to figure out how to prioritize testing of schools, daycares, critical infrastructure and first responders.

Jonathan Quick, who leads the Rockefeller Foundation’s pandemic response, said it is critical that the rapid antigen tests are utilized properly.

“We need to avoid having a large chunk of these tests end up going for the worried low risk populations,” Quick said. “The states have a clearer idea of what are the risk communities.”

The government decision to send a signal there is market demand for antigen tests is a good decision, he added. More companies are expected to bring similar antigen tests to market in the coming months — which Quick says will enable the Rockefeller Foundation’s goal of conducting 25 million rapid tests per week by the late fall.

Even so, the federal government should provide more specific guidance to states and localities on how to best use the new tests, experts say.

“There are a lot of states that want to use testing effectively,” McClellan said. “These are situations where federal guidance augmenting state and private sector activity can be helpful.”

Yet nearly six months after Trump claimed that “anyone who wants a test can get a test,” the administration is effectively giving up on that goal. The idea of a world where all Americans can wake up in the morning and find out if they are infected as one not grounded in reality, Giroir told reporters on Tuesday.

“It’s great to talk about this utopian kind of idea where everybody has a test every day and we can do that,” he said. “I don’t live in a utopian world. I live in the real world.”

One senior administration official, meanwhile, recently told POLITICO it will likely be months before the FDA allows use of a true at-home test — one that doesn’t need to be administered by a health care provider.

Obama-era CDC Director Tom Frieden earlier this week warned the overhaul of the CDC’s testing guidelines represents “political meddling with the response to the virus.” And Democrats on the Senate’s health committee have called for hearings into the decision not to recommend asymptomatic testing for many Americans.

“From a public health perspective, having less data is never the goal,” another former HHS official told POLITICO.

And the administration’s mixed messaging around its testing strategy is not a way to build public trust in government health agencies when it is most needed, said Heather Pierce, regulatory counsel at the Association of American Medical Colleges.

“Whether it’s testing, mask wearing, social distancing, a vaccine, if we don’t have consistent understanding and and trust in the science and the process that’s taking place, then we’re in very very serious trouble as a country,” Pierce said.