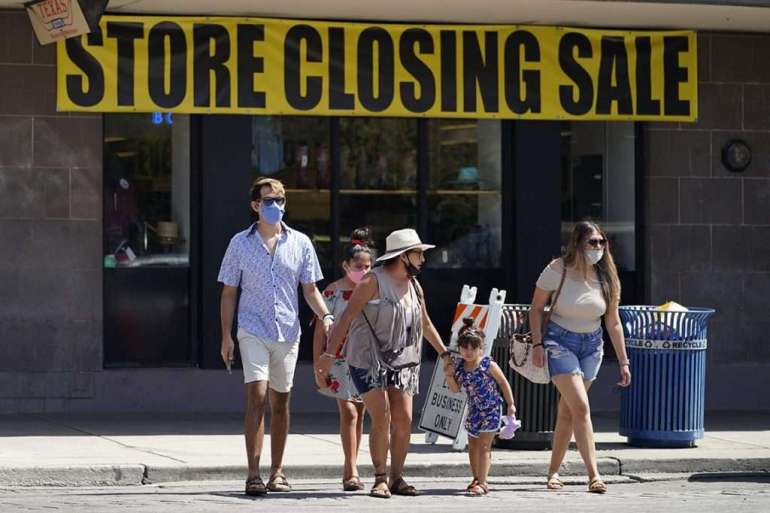 Earlier this summer, Covid cases were dipping and states started reopening. Weeks later, there was a resurgence. Trump is now looking at a repeat of that situation — just two months ahead of the election.

“With consumer demand falling, as things get colder and as people don’t want to be outside and begin to feel more impact from the lack of federal help, you would expect people to spend less,” said Ray Sandza, vice president of data and analytics at Homebase, which monitors small business activity. “You would expect that to have an impact on these businesses. At this point, just staying flat where we are now would be a very good outcome.”

Reliable readings on small businesses are hard to come by to track real-time shifts in the economy, but several private gauges paint an ugly picture.

Homebase found that the recovery that began in April essentially flat-lined in August with more than 20 percent of small businesses across the nation remaining shuttered.

Even worse,local business site Yelp found that 55 percent of the firms that closed during the worst of the pandemic beginning in March are now permanently shuttered.

According to figures maintained by Drexel University’s Andre Kurmann, very small businesses — those with 50 employees or less — lost nearly 18 million jobs between mid-February and mid-April, a 60 percent decline. Close to half of these jobs returned as states began to re-open — but then the recovery stalled out in mid-June.

“The risks in my view are quite large that this situation is going to get worse again and that we could actually see another decrease in small business employment,” Kurmann said. “Consumer spending data suggest these stimulus checks and expanded unemployment benefits actually led to more consumption and more income on the lower end of income scale. And if that goes away, then we have a real immediate impact.”

The slowdown in the jobs recovery among smaller businesses is already reflected in some of the first emerging national data for August. Payroll processing firm ADP on Wednesday reported that employers added only 428,000 jobs in August, well below the 1 million that economists expected.

The Labor Department reported that the economy gained 1.8 million jobs in July, sharply below the 4.8 million added in June. The numbers for August, due out Friday morning, are expected to show another slowdown in the pace of the recovery with expectations for a gain of 1.4 million.

Ordinarily that would be a blowout performance, but the economy so far has replaced only about 9 million of the 22 million jobs lost to the coronavirus pandemic.

Consumer spending has also started to slow as relief checks stop flowing and unemployment benefits decline. That’s despite efforts by the Trump administration to divert federal disaster aid to states to keep some of the extra $600 per week in jobless assistance flowing while lawmakers remain in a standoff.

A key measure of consumer spending from the Commerce Department, personal consumption expenditures, rose just 1.9 percent in July after much sharper jumps of 6.2 percent in June and 8.6 percent in May.

The slowdown in small- and mid-size business hiring would also come amid an expected fresh wave of bankruptcies among larger businesses.

Already this year, many well-known large companies have filed for bankruptcy protection after getting slammed by the coronavirus outbreak including car rental company Hertz, retailers Neiman Marcus, J.C. Penney, Brooks Brothers and J. Crew and oil and gas firms slammed by lower demand including Chesapeake Energy, McDermott International and Whiting Petroleum. According to S&P Global, 424 companies went bankrupt through Aug. 9.

Ranked by assets, bankruptcy filings this year have already surpassed the financial crisis year of 2008, according to BankruptcyData, which tracks business bankruptcies.

Data from bankruptcy analysis firm First Day by Reorg suggest the first half of 2020 was the busiest ever for filings, led by a record number of retailers, restaurants and oil and gas companies seeking Chapter 11 protection.

The overall stock market so far has mostly ignored the wave of bankruptcy filings. But analysts fear that a fresh pile of large failures this fall could finally dent the remarkable Wall Street bounce back from the depths of the Covid-19 crisis.

The impasse on talks about a new federal stimulus package also means that, at least for now, no new emergency funding will be available for small and midsize businesses through the Paycheck Protection Program.

The program, which doled out more than $520 billion in funds, retains around $134 billion that could be used to approve new loans. But the Small Business Administration’s authority to approve the loans expired on Aug. 8. There is bipartisan support to extend the program — and to make it easier to convert the smallest loans into outright grants that don’t have to be repaid — but it remains locked in limbo in the stalled stimulus talks, meaning more business failures are likely in the coming months.

There might not be as notable an increase in smaller-business bankruptcy filings. But Hammond said that could be because the businesses simply ran out of money and shut their doors and never attempted to file for legal protection, or they didn’t bother with courts partially closed.

“I’m ashamed to say the trend in bankruptcy is not going to improve, and I don’t think I’m really going out on a limb to say that,” Hammond said.