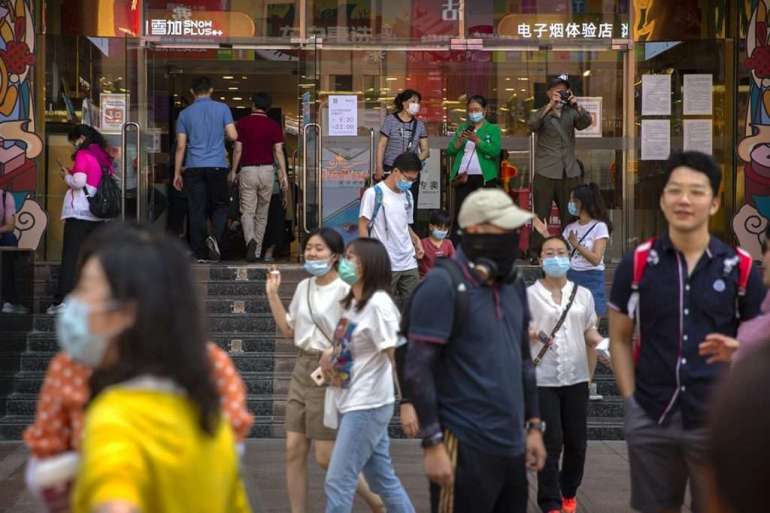 Jan Hatzius, a Goldman Sachs analyst who co-authored the report, told POLITICO that U.S. economic results since July bear out the relationship between health and growth. The economy’s improvement, he noted, corresponds to a rising share of the American population subject to state and local mask mandates — from about 40 percent in June to its current 80 percent.

East Asian economies where mask-wearing is a national norm, such as China, Japan and South Korea, have avoided the worst recessions, as have countries like Vietnam and Singapore, which instituted mask mandates early on in the pandemic. Like China, Vietnam is now posting positive economic growth.

Masks are not the only medicine: Germany’s rigorous testing and well-prepared health system put its health and economic outcomes consistently ahead of both its large neighbors and the U.S.

While national economies are likely to have hit rock bottom back in April, countries that have failed to contain the virus such as the U.S. are on the path to prolonged recession, rather than recovery.

Under the Trump administration, the country started locking down in mid-March — and many states did not do so until April — well behind hard-hit European countries. And the U.S. opened up sooner. That helped achieve better economic numbers in the second quarter than much of Europe, but it also didn’t snuff out the virus.

Unable or unwilling to close state borders, the coronavirus has ricocheted around the U.S., in contrast to EU countries which closed their internal borders for months. Covid-19 case levels have plateaued at a much higher in the U.S. than in other rich countries, and public health officials fear the onset of flu season and cooler weather will cause another spike.

Modeling by the University of Washington’s Institute for Health Metrics and Evaluation projects American Covid-19 deaths to be around 408,000 by December 31 if current policies are maintained, rising to 608,000 if current pandemic restrictions are eased. If a national mask mandate were in place, the death toll could be limited to 286,000.

“In the COVID recession, economic conditions are too closely tied to the pandemic’s trajectory to be able to forecast with confidence the course of recovery,” writes Stanford University’s Michael J. Boskin.

Economists now warn that instead of the “v-shaped” recovery President Donald Trump has been promising — a reference to an economic bounce to match the dip of spring 2020 — it now risks a “double-dip” recession without renewed economic aid.

In the U.S., 80 percent of 235 economists surveyed by the National Association of Business Economics in August see a 1-in-4 chance of such a recession, where the economy would retrench again, as it did in the spring, rather than keep recovering.

The warning signs include mounting bankruptcies as a flood of U.S. government support from April to July turns into a trickle, and the likelihood that falling temperatures will dent outdoor dining and other tourism-related spending.

U.S unemployment numbers are another cause of concern. On Wednesday, United Airlines and Ford announced tens of thousands of layoffs, and the World Travel and Tourism Council estimated just over 12 million out of 16.8 million tourism-related jobs in the U.S. are at risk of being lost in a “worst case” scenario in coming months. The U.S. Travel Association puts the number at 8 million.

While 10.5 million jobs have been created since the beginning of June, bringing the official unemployment rate down to 8.4 percent, claims for a new pandemic unemployment assistance program designed for freelance and gig workers are rising: 760,000 claims last week, up from 607,806 claims the previous week. Overall, more than 29.2 million American workers are now receiving unemployment insurance benefits.

One way to illustrate the depth of the economic shock facing the U.S. is to compare jobless numbers here with the 19-strong collection of Eurozone countries, which has a nearly identical population to the U.S. More than 35 million Americans made unemployment claims between April and June, compared to just 4.5 million in the Eurozone, according to the EU statistics agency Eurostat.

One of the reasons European companies were able to keep a lid on unemployment: They kept up to 45 million workers on paid furlough schemes, according to a European Trade Union Confederation (ETUC) estimate.

A newsletter from POLITICO that unpacks essential global news, trends, and decisions.

The U.S. government budget deficit is also projected to triple this year to $3.3 trillion, soaring to the largest percentage of gross domestic product since 1945, per Congressional Budget Office calculations. As a result, federal debt will exceed 100 percent of GDP by the end of 2020. Just seven of the European Union’s 27 member countries have debt levels above 100 percent of GDP.

Trump, however, continues to deflect responsibility for the country’s economic straits, and tout things like the country’s stock market performance to suggest the economy is bouncing back. Contrast that response with the government in Australia, which announced Wednesday that the country had entered its first recession in 29 years. While Australia’s recession is smaller than America’s, Prime Minister Scott Morrison told Parliament “this is a devastating day for Australia.”

Elsewhere, Japan’s prime minister Shinzo Abe resigned last week: officially for health reasons, but also dragged down by a 32 percent approval rating. While Japan’s economy is doing the best of the G7, and has a far lower unemployment rate than the U.S., it’s still the country’s worst recession on record, and leaves Japan with worse economic and health outcomes than regional rivals China, South Korea and Taiwan.

While China’s global economic influence is growing, the United States economy remains the world’s largest, and its health has the ability to lift up or drag down other national economies.

With the U.S. unable to harness its famous innovation and labor market flexibility to quickly bounce back to growth as it did after the 2008 financial crisis, the International Monetary Fund (IMF) warns the global recovery “is projected to be more gradual than previously forecast,” and bankruptcy rates could triple to 12 percent in 2020 from an average of 4 percent of small and medium enterprises before the pandemic.

The IMF and organizations such as the Organization for Economic Cooperation and Development (OECD) have been revising their GDP projections downward for all G7 economies since January 2020. Most economies are only expected to get back to their pre-COVID-19 levels by late 2022, assuming a vaccine becomes widely available in 2021.

Other positive forecasts may be offering false hope. The IMF projects an impressive-looking growth rate for 2021 — 4.5 percent for the U.S. and 5.4 percent globally — but achieving even that would still leave the global economy 6.5 percent smaller in December 2021 than in January 2020 when the virus hit.

“The recovery will peter out, even if we don’t tip into another outright recession because of unemployment,” said Albert Edwards, a global strategist at French banking giant Société Générale who became famous for foreseeing the 2008 global financial crisis. “It will certainly feel like a depression,” he said.