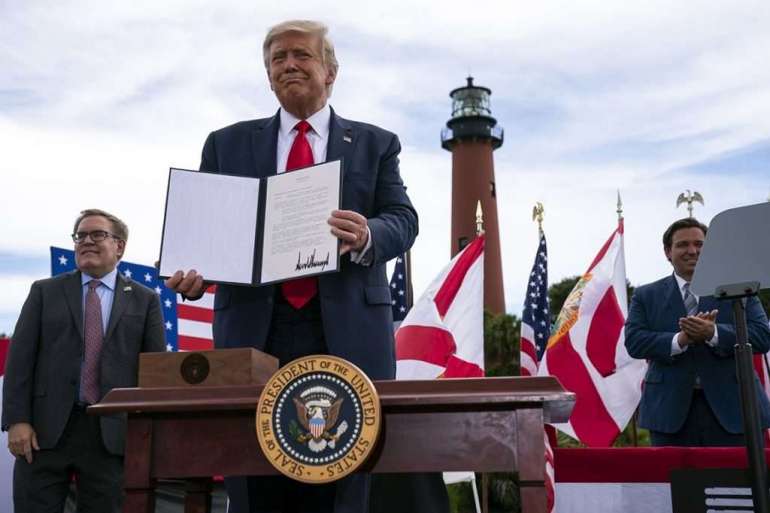 A congressional aide who works on the issue said their office had gotten no advance heads-up from the White House.

“As of yesterday they said there would be no announcement,” one congressional aide said on Tuesday morning.

The new move is expected to be done by Presidential Memorandum, according to an administration official. That vehicle — the same one the Obama administration used to withdraw parts of Alaska from drilling — would have the same impact as a Congressional moratorium, an industry source added.

Half a dozen industry officials and lobbyists who had been working on the offshore exploration issue with the Interior Department, which develops the federal government’s five-year drilling plans, told POLITICO the administration never mentioned extending the moratorium.

“It’s a complete ambush,” said one industry official who had been abreast of Interior’s plans. “Nobody knows where this came from. It totally seems like a campaign sort of thing.”

Trump’s newest plans for an extension of the drilling moratorium were first reported by POLITICO earlier on Tuesday. The White House and the Interior Department declined to comment.

The Trump administration had originally announced in 2017 it would seek to open nearly all the U.S. coastal waters to oil and gas drilling, but it quickly walked that plan back after complaints from then-Florida Gov. Rick Scott and other governors. People familiar with the administration’s plans had told POLITICO as recently as June that the administration was still aiming to open up those waters to drilling, but that it would wait until after the November election to announce the move.

The oil industry has aggressively lobbied the Trump administration to open up the Eastern Gulf of Mexico for oil and gas drilling when the current moratorium on exploration there ends in June 2022. Florida residents are strongly opposed to opening up the area to drilling rigs, however, fearful that an oil spill would wreck the state’s tourism and fishing economy — something its Panhandle region got a taste of during the catastrophic BP spill in 2010.

The Interior Department, which develops the five-year plans that dictate which federal waters will be leased out for oil and gas drilling, had been acceding to the industry pressure to open up the waters off Florida’s coast, though Trump told local Florida media last month that he had removed the state from any new drilling plan.

One oil and gas industry executive said with Trump behind in most national polls, securing states he won in 2016 has taken on increasing urgency for his re-election campaign. In 2016, Trump won Florida by 1.2 percent.

“Industry views on this right now — they don’t matter,” said an oil and gas industry official. “All the decisions they’re making right now, they’re probably like, ‘We helped you. We don’t care.’”

Issuing a presidential memorandum to rescind Florida waters through the Outer Continental Shelf Lands Act, which Obama used to withdraw many Arctic areas just before leaving office, could have a lasting effect. Federal courts have so far upheld Obama’s memorandum by rejecting the Trump administration’s attempts to open the offshore Arctic areas. The Trump administration is challenging that ruling.

Florida Republican Gov. Ron DeSantis joined Trump at his Florida appearance. But the governor’s office has no details about the moratorium, suggesting the policy change had not been shared with DeSantis’s office.

A House aide who has been in contact with people about the offshore moves said Congress could back up any executive action by expanding the exising drilling moratorium through a stopgap spending bill. The aide was unsure whether the spending bill would include any language prohibiting drilling off the Atlantic coast, which the Trump administration has also considered opening up.

Coming on the heels of Trump signing the Great American Outdoors Act to permanently fund public lands and the administration’s efforts to erect obstacles for the proposed Pebble Mine in Alaska, the House aide said conservationist allies in the White House and Florida Republicans may be working in tandem to convince Trump that blocking drilling is good electoral politics.

A oil lobbying source who had worked the issue also said he had not received a heads-up from the White House, and that his calls Wednesday morning to administration officials asking for details on a moratorium had gone unanswered.

“Both Interior and the White House are noticeably non-responsive right now,” the lobbyist said.

Gary Fineout contributed to this report.