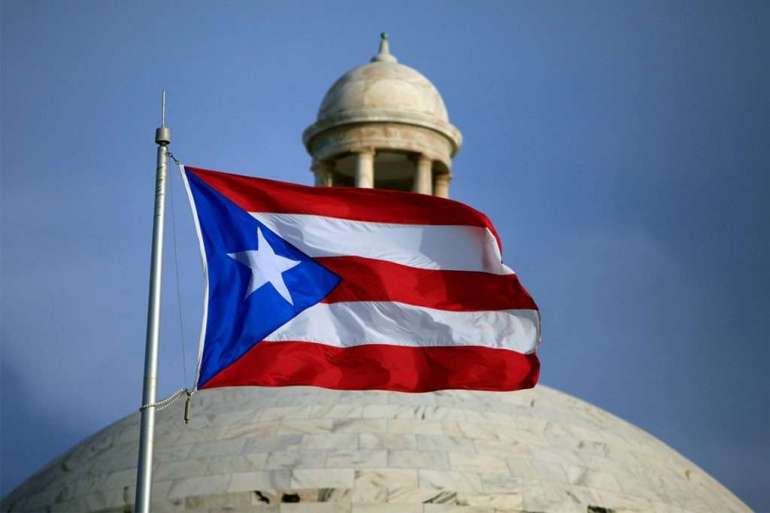 “People in the continental U.S. think that Puerto Ricans are going to vote Democratic, but on the other hand, the conservative values and Latin traditions are more akin to the values of a Republican Party,” said José Garriga Picó, a political scientist and former member of the Puerto Rican Legislature. “You can’t really predict what voters are going to do here.”

Some of the assumption that Puerto Rico would go blue is based on the fact that Puerto Ricans, when they move to the mainland, are often a reliable Democratic vote. A POLITICO poll from last spring asked Puerto Rican voters in Florida about their political preferences. It found that 38 percent of respondents identified as Democrats, but 42 percent said they weren’t committed to either party.

Both major islandwide elected officials in Puerto Rico are registered Republicans, as is the sitting governor, who was installed by the island’s Supreme Court. Puerto Rico’s Legislature, which has made a mark in recent years by enacting conservative laws including restrictions on abortion and expressions of gender identity, is led by registered Republicans in both its House and Senate. Seven of the past eight elections for governor or resident commissioner were won by members of the New Progressive Party, the more conservative of the island’s main parties—including the territory’s current nonvoting member of Congress, Jenniffer González-Colón, who is a member of the NPP, the chairwoman of the Puerto Rican Republican Party and a former co-chair of Latinos for Trump.

Meanwhile, as national Democrats flirt with the prospect of a Senate majority in 2021 and agitate for statehood for Puerto Rico, there’s a real political risk: They would add two seats to the Senate, but contrary to Republicans’ vocal fears, it’s no safe bet that those new senators would be Democrats.

Which may well mean that while this year, the path to a Senate majority runs through Denver, Birmingham and Billings, come 2022, San Juan might be the next battleground. Puerto Rico could be a purple state.

In Puerto Rico, statehood is the axis around which all politics revolve.

There are two main political parties — the New Progressive Party and the Popular Democratic Party. Neither fits neatly into the Democratic-Republican binary, but the NPP is typically seen as the more conservative coalition, and has advocated tax cuts and conservative social policies—positions which align it more closely to the Republican Party, even as national Republicans generally oppose statehood. But perhaps the most important contrast between the two parties comes on the issue of statehood: The NPP supports it, while the PDP is pro-commonwealth. The NPP advocates closer ties with Washington, whereas the PDP advocates local control.

In recent years, the NPP’s platform has proved successful at the ballot box. The party has two-thirds majorities in both the House and Senate, and controls both the governor’s mansion and the island’s nonvoting seat in the U.S. House.

Carmen Yulín Cruz, the high-profile mayor of San Juan who is a member of the opposition PDP, says it would be a mistake to conflate the NPP’s dominance with widespread support for conservatism — many of its members identify as Democrats, she notes. Even so, she’s not sure whether Puerto Ricans would identify more with the Republican or Democratic Party if statehood were achieved.

Yulín Cruz, who frequently appeared on cable news after Hurricane Maria as a Trump critic, has been embraced by the progressive wing of the national Democratic Party and served as a co-chair of Sen. Bernie Sanders’ presidential campaign. During her recent gubernatorial primary, she was endorsed by Sen. Elizabeth Warren, then lost her race for the party’s nomination by almost 50 points.

Yulín Cruz denies that she’s a symbol of the far left. “I got support through the entire realm of possibilities within the Democratic Party,” she says, noting that in addition to Warren, she got the backing of more moderate Democrats, like Mississippi Rep. Bennie Thompson. But local political scientists say that hasn’t stopped residents from perceiving her as a radical leftist—and suggest that the results of her race tell us something about how a post-statehood Puerto Rico might vote.

“It’s really tough to argue that we would be a blue state,” said Mayra Vélez Serrano, a political science professor at the University of Puerto Rico at Río Piedras. “The [2020] primary tells you that. Someone like Carmen Yulín Cruz, who’s very progressive and has a lot of support from the mainland, did horribly locally.”

On the island, fringe parties on the right and the left have been growing. This election cycle, a new Christianity-based party called Project Dignity filed the paperwork to become an official political party. That process calls for 48,000 signatures, but Project Dignity delivered 58,000. Its policies include presenting women contemplating an abortion with information about the viability of the fetus and the medical risks they might face during the procedure. It also advocates studying how the workforce might discriminate against fathers and mothers. Think of them like a Puerto Rican Tea Party.

Vélez Serrano says the Democratic Party is shedding loyalists on the island because residents are starting to lose faith that it will ever deliver statehood. “You hear people say that Democrats talk about helping Puerto Rico,” she said. “But at the end of the day, when they’re in power nothing happens. It’s lip service.”

Statehood hasn’t come about in Republican administrations either, but what she’s referring to are the close calls that ended in disappointment.

In 2011, during an official visit to the island—the first of any sitting president since John F. Kennedy—Barack Obama promised to support whatever decision Puerto Ricans made about their status. “When the people of Puerto Rico make a clear decision,” he said to an audience at the Luis Muñoz Marin International Airport, “my administration will stand by you.”

A little more than a year later, Puerto Ricans voted in favor of statehood in a nonbinding referendum. Over 60 percent of voters said they wanted to see the island become a state. But many observers said the results were muddied by confusion about whether the results actually resulted in any sort of mandate. Rather than offer voters a simple up-down vote on statehood, the ballot presented three options for Puerto Rico’s preferred form of government: statehood, sovereign commonwealth or independence. Leading up to the vote, the PDP urged voters to leave the ballot question about statehood blank altogether, in protest of the fact that their preferred option—“enhanced commonwealth,” which would keep the island’s current status but add some of the benefits of independence, like exempting it from some federal laws—wasn’t on the ballot. Ultimately, more than 498,000 ballots—26.5 percent of all ballots cast—were left blank.

When asked about the election results at a news conference in 2012, White House press secretary Jay Carney said the Obama administration declined to endorse the outcome “because of the process itself.” The next day, the Obama administration reversed its position and endorsed the pro-statehood results of the referendum. The Congress, with its Republican-controlled House and Democratic Senate, never ratified the results of Puerto Rico’s statehood vote, and the island was not granted statehood.

It is perhaps the most prominent example in a string of near-misses for statehood advocates. In 1990, conditions seemed ripe: Democrats controlled both chambers of Congress. The U.S. House passed a bill appropriating funds for a statehood referendum for Puerto Rican voters for the next year. The Senate had its own bill, which included language saying that, upon certification of that referendum, Puerto Rico would be admitted as a state. The Senate version passed three committees but never made it to the floor for a full vote. The bills expired a year later.

Velázquez, who was born in Yabucoa, Puerto Rico, says if her bill passes and Puerto Rico decides to become a state, she’s not sure whether the island will send two Democratic senators to Washington.

“That’s certainly the fear of the Republicans in Congress. They truly believe that for the most part, Puerto Ricans will be in the Democratic Party. I just, I do not know,” Velázquez told POLITICO. “It will be a different ballgame. People are learning that they need to hear from both parties what are their platforms on the issues that matter most for Puerto Ricans.”

Picó, the former Puerto Rican legislator-turned-political scientist, notes that when Hawaii and Alaska were admitted to the U.S. as states in 1959, the assumption was that Hawaii would be a Republican state and Alaska would be solidly blue. That’s not how either state votes now. Hawaii is solidly blue, and Democratic presidential candidates have carried it in all but two elections since 1960. Alaska is beet red and has voted for a Democratic presidential nominee only once.

“I know that’s the assumption in the states that Puerto Rico would become a Democratic state,” Picó said. “Then again, you never know.”

CORRECTION: A previous version of this article misspelled Yabucoa.