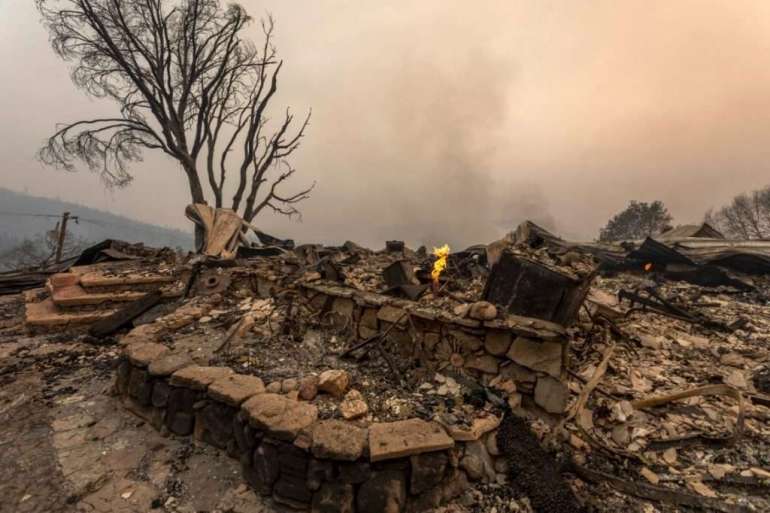 President Trump is visiting California today as deadly and destructive wildfires burn up and down the West Coast. POLITICO’s Carla Marinucci explains why the trip is likely to become a political showdown over climate change.

Pressed by CNN host Jake Tapper on what specifically the president could be doing, given that he declared an emergency in California three weeks ago, Garcetti said there was a “refusal in blaming blue states over red states.” The president, who is on a three-day campaign tour of the West, is scheduled to meet with local and federal officials near Sacramento on Monday to assess the vast wildfire damage.

“Instead of hitting the golf course or going on vacation, the president and Congress respectively should sit down this week and make sure that there is assistance for these brave men and women who are protecting our lives and proteting our property,” Garcetti added.

Trump has repeatedly attacked Democratic elected officials in California over the fires, similar to the way he criticized their management of previous years’ blazes. He has accused leaders of insufficiently raking dead forestry, something Garcetti nodded to on Sunday.

“He is going to come out here and probably tell us, ‘I’m going to send you rakes instead of more help,’” Garcetti said on CNN. “We need actual help, material help, not based on our party affiliation or how we voted.”

The wildfire crisis is not the only case of Trump appearing to factor politics into his emergency assistance decision-making.

Throughout the coronavirus pandemic he has lambasted Democratic New York Gov. Andrew Cuomo, whose state was the epicenter of the outbreak in the spring, and he has also gone after Democratic Govs. Gretchen Whitmer of Michigan, who was being considered by Joe Biden as a vice presidential candidate, and Jay Inslee of Washington state, who made a short-lived bid for the Democratic presidential nomination.