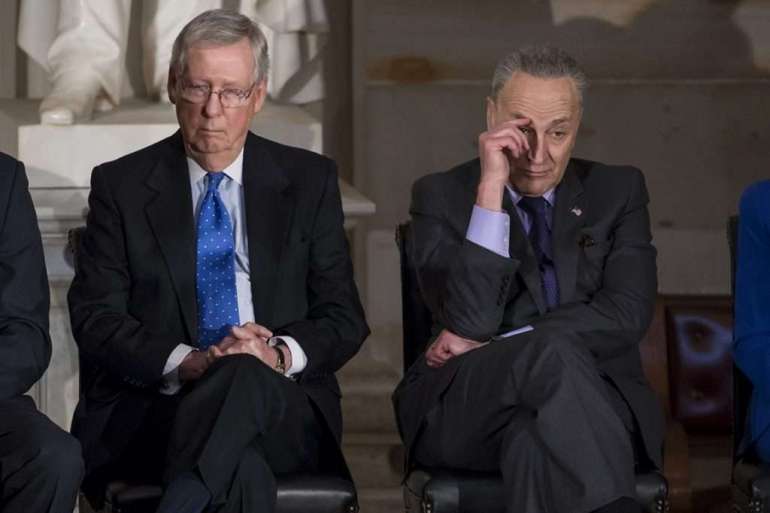 But if Democrats pick up a net three seats, that’s what happens. Should Joe Biden win the presidency, they’ll hold the majority; if President Donald Trump is reelected, Democrats need four seats to do so. That’s because under an evenly divided chamber, the party that holds the White House runs the Senate, with the vice president casting the deciding 51st vote to break any tie.

As of now, the struggle for the majority is being bitterly contested in a half-dozen states. GOP Sens. Cory Gardner of Colorado, Martha McSally of Arizona, Thom Tillis of North Carolina and Susan Collins of Maine face tough challenges in November. Democrats are also investing heavily in Iowa and Montana, while there are two Senate races in Georgia that could present them with pickup opportunities. Meanwhile Sen. Doug Jones has an uphill reelection bid for a Democrat in Alabama. Michigan Democrat Gary Peters holds a small lead over his GOP challenger, although Biden’s strength in the swing state will aid the incumbent.

Who is running the Senate might not actually be known until January if the two Georgia Senate races go to runoffs. But interviews with more than 15 senators in both parties found agreement on this much: Hardly anyone is rooting for it.

“Everyone’s got leverage,” said Sen. Tim Kaine (D-Va.), who said he didn’t want to think about that outcome just yet. “We’re just talking about pedal to the metal and hopefully winning as many [seats] as we can.”

It’s the semester nobody wanted: Kids sitting at home behind monitors, teachers trying to figure out how to unmute themselves and parents stuck wondering whether their children will lose a year of education.

A split Senate also would drastically reduce the likelihood that Democrats nix the legislative filibuster if they gain full control of Washington. Progressives have urged using the “nuclear option” to unilaterally gut the filibuster in order to enact a bold agenda for a President Joe Biden, but getting all 50 Democrats in the ideologically diverse caucus to sign on would be difficult. (The vice president could be the deciding vote on a rules change in the event of a 50-50 split.)

Of course, the senators hastened to add, if it means being in the majority, they’d take it.

“Better than a Senate with Mitch McConnell in charge … but not as good as a 52-48 Senate,” said Sen. Brian Schatz (D-Hawaii.) “It would just make it harder to get legislation passed. If you’re ever not unanimous, you can’t pass a bill, assuming that the Republicans oppose everything that Joe Biden proposes.”

An evenly split Senate is a rarity. It’s only happened three times in the Senate’s storied history, in 1881, 1953 and most recently after the 2000 election, and that didn’t last long. Amid frustration with George W. Bush’s conservative agenda, Sen. Jim Jeffords of Vermont left the Republican Party in May 2001 to caucus with Democrats and deliver them full control of the body, at least for the 107th Congress. Republicans won back the majority in 2002.

The makeup of the Senate shapes how it is run, and Jeffords’ switch upended a careful balance that had been worked out between then-Senate Majority Leader Trent Lott (R-Miss.) and Minority Leader Tom Daschle (D-S.D.). With then-Vice President Dick Cheney giving them a 51st vote, Republicans held the committee chairs. But funding for staffers and office space — huge issues in the Senate — were divided equally between the two parties. The chamber adopted unique rules that allowed either Lott or Daschle to move bills and nominations if there was a deadlock inside the committees.

Those who served during that last 50-50 Senate aren’t exactly eager to see it happen again.

“I like a majority better,” said Sen. Jim Inhofe (R-Okla.) “I’ve tried both, and I think that’s what’s going to happen.”

But Inhofe also recalled that there was “more comity” in a 50-50 Senate. Senators note that as long as the 60-vote threshold to move forward on most legislation remains in place, members will still need to work across the aisle to get anything substantial through the body.

Other senators suggested a split Senate could force more bipartisan compromise, because it would amplify the voices of moderates like Sens. Joe Manchin (D-W.Va.) or Collins, whose votes with their party will be key with such a small margin of power.

When asked about the potential pressure of a 50-50 Senate under a Democratic majority, Manchin responded, “It wouldn’t be tough at all.”

“It would be a great place to be, there’d be common sense back to this place,” the West Virginia Democrat said.

A 50-50 Senate could pose bigger obstacles for the president when it comes to the confirmation of executive branch nominees, federal judges and Supreme Court justices, who need only a simple majority to get through the Senate. The White House wouldn’t be able to afford to lose a single vote in their party and given the increasingly partisan nature of nomination fights, the vice president might end up spending a lot of time in the Senate.

“It just means Mike Pence is going to have to do a whole lot of voting,” said Sen. Mike Rounds (R-S.D.).

Party leaders would face the same scenario if they tried to pass major legislation through complex budget reconciliation procedures, where only a simple majority is required. Republicans failed to repeal Obamacare because they couldn’t muster the 50 GOP votes as Pence looked on.

Both Sens. Todd Young (R-Ind.) and Catherine Cortez Masto (D-Nev.), chairs of their respective party campaign arms, declined to speculate on the likelihood of the Senate splitting 50-50. Instead, they each predicted their side would win.

But some senators acknowledge that regardless of whether the Senate is 50-50 or 51-49, it’s going to be hard to govern.

“I don’t know that it looks a lot different than a 51-49 Senate,” said Sen. Chris Murphy (D-Conn.). “It’s going to be difficult to get 50 votes on anything if there’s 50, 51, 52 Democrats. … I’m not sure that fundamentally changes the dynamics. Leadership will be hard no matter what.”