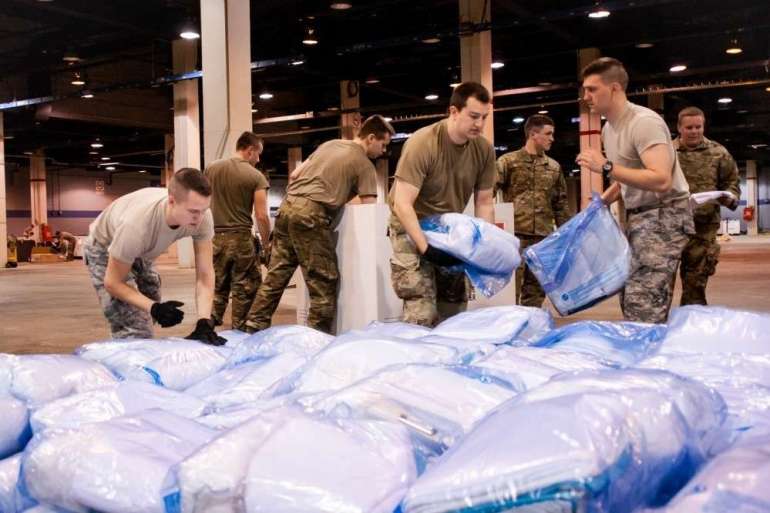 The new plan will draw on findings from the Joint Staff’s “in-stride” review of the Covid-19 response, completed a few weeks ago and viewed by POLITICO, which detailed some of the military’s shortcomings in responding to the pandemic and recommendations for future crises. The results of the study have not been previously reported.

In confronting Covid-19, the Pentagon failed to initially account for the “global nature” of a modern pandemic — how far and fast the virus would spread — and had difficulty distributing key medical supplies, the Joint Staff found.

The military has relied on Northern Command’s 2013 playbook, officially titled the “global campaign plan for pandemic influenza and infectious disease,” to guide its response to the coronavirus outbreak. The 2013 plan updated previous guidelines developed during the 2009 swine flu epidemic. The plan is separate from the National Security Council’s 2016 guidelines, which POLITICO first reported in early March.

But the 2013 playbook left much to be desired. “The pandemic response was a globally integrated operation,” according to the internal review. The existing plans “did not address the global” scope of the pandemic, or the responsibilities of the various military entities, including the Joint Chiefs, the combatant commands and the services, in carrying out the U.S. domestic response.

The document recommended the Joint Staff redo the plan “to incorporate global integration insights and lessons learned on the military response to Covid-19.”

Since the pandemic broke out across the nation this spring, the Pentagon has taken on responsibility for several aspects of the response, including vaccine research, setting up temporary hospitals in virus hot spots, and deploying the National Guard to help local authorities with managing test centers and other logistical tasks. But according to the Joint Staff’s review, a major problem was that the roles for these missions across DoD’s bureaucracy were not well-defined.

One challenge was finding and delivering medical supplies, according to defense officials and the documents. In the early days of the pandemic in March, DoD provided health officials with millions of masks and several thousand ventilators. The Defense Health Agency was initially tasked with coordinating the movement and allocation of these resources, the bulk of which belong to the Army.

But frictions soon emerged between DHA and the services, the review found. In response, the Joint Staff’s “J4” logistics directorate stood up a task force to bridge that gap, though the unit does not normally track these movements.

“Prioritization of materiel requirements was a significant challenge,” according to the documents.

Officials concluded that in future crises, the Joint Staff should take the lead in documenting the roles of medical and logistics communities for “managing, monitoring and reporting on specific medical supplies/equipment within an operations-centric viewpoint and lead.”

In other findings, the review concluded that the Pentagon also missed opportunities for improvement by failing to initiate a formal “in-stride” review process until late in the crisis. It urged the department to “take a deliberate breath” moving into future crises to assess and better understand the existing plans in place to help guide the response, and to provide for a joint “battle team” to provide accurate, relevant information to the chairman of the Joint Chiefs.

“From day one of the federal response to COVID, [Defense Secretary Mark] Esper directed the tracking and compilation of lessons learned,” said Pentagon spokesperson Lt. Col. Thomas Campbell. “Those observations are currently in their initial stages, and will be reviewed by offices throughout the department for thoroughness and accuracy before being briefed to leadership. Once it is finalized, we look forward to sharing the results.”

The internal review also said coordination was further impaired by new social distance and work-from-home policies necessitated by the pandemic, according to the report, which recommended expanding access to telework.

The review also urged the Joint Staff not to lose sight of other global threats, including actions by China, Russia and Iran, during future pandemics in order to avoid being “surprised by tomorrow.”