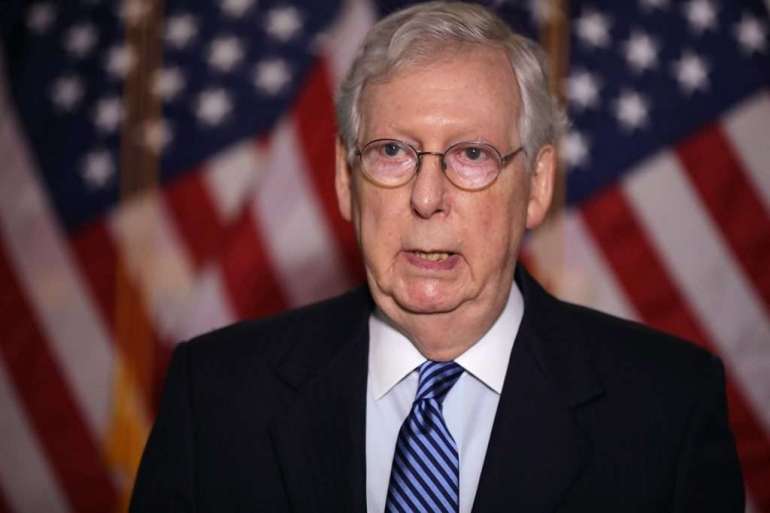 McConnell’s decision has already outraged Democrats, who have called for the majority leader to wait until January — when the control of the White House and the Senate could shift — to put a nominee on the floor.

But McConnell, who blocked former President Barack Obama from placing Merrick Garland on the Supreme Court in 2016, and later changed Senate filibuster rules to put two of Trump’s picks on the high court, is once again playing power politics of the bare-knuckled kind. His announcement will now force the hand of any wavering Republicans. They are either with Trump and McConnell, or they are against them; there will be no middle ground in this fight.

Trump, McConnell and Senate Judiciary Chair Lindsey Graham (R-S.C.) are all up for reelection on Nov. 3. If Trump quickly announces a nominee and Graham goes ahead with a hearing and vote on the president’s choice, Democrats can slow down the process. But, with the GOP in the majority, they can’t stop it.

Graham on Friday did not immediately address the prospect of a Supreme Court confirmation fight, only offering condolences to the family of Ginsburg, who died at age 87 on Friday from complications related to pancreatic cancer.

“It was with great sadness that I learned of the passing of Justice Ginsburg,” said Graham, who faces a reelection battle in November that is shaping up as a battleground.

“Justice Ginsburg was a trailblazer who possessed tremendous passion for her causes. She served with honor and distinction as a member of the Supreme Court,” Graham added. “While I had many differences with her on legal philosophy, I appreciate her service to our nation.”

In 2018, Graham said in the midst of Brett Kavanaugh’s confirmation hearing that he would “wait until the next election” if a vacancy were created in the final year of Trump’s presidency after the primaries had started. He has since wavered, saying early this year that the ugly confirmation fight over Kavanaugh changed his view.

But Graham, who faces a surprisingly tough challenge from Democrat Jaime Harrison and is one of the president’s closest allies in the Senate, is almost certain to go along with McConnell.

Sen. Ted Cruz (R-Texas), a member of the Judiciary Committee, said Friday evening that Trump should nominate a replacement as soon as next week.

“We cannot have Election Day come and go with a 4-4 court … and I think we risk a constitutional crisis if we do not have a nine-justice Supreme Court, particularly when there is such a risk of a contested litigation and a contested election,” Cruz, who was also on Trump’s shortlist of possible Supreme Court nominees, said on Fox News.

To meet that timeline, the Senate would have to work at a record pace. The average Supreme Court confirmation process takes more than two months from start to finish. The Senate could also confirm a Supreme Court nominee before the end of the lame duck session ends in early January.

Abortion, gun rights, climate change and the limits of executive power are already at the top of voters’ minds heading into the final weeks of the campaign. Ginsburg’s death, and the possibility that Trump and McConnell could solidify conservative control of the high court, will now become a critical focus of the battle for both the Senate and the White House in the final stretch of the campaign.

Vulnerable GOP senators including Susan Collins of Maine, Thom Tillis of North Carolina and Cory Gardner of Colorado will not be able to escape questions over whether they would support filling Ginsburg’s seat before Election Day, or the even more troubling question about what would happen if Trump loses reelection and the Senate changes hands.

Across the aisle, Democrats are already lashing out at the looming move by Trump and McConnell, and their protestations are only going to grow louder in coming weeks.

Minutes after Ginsburg’s death was announced, Senate Minority Leader Chuck Schumer declared that McConnell should leave Ginsburg’s seat open until next year, setting out the position all Senate Democrats will adopt.

“The American people should have a voice in the selection of their next Supreme Court Justice,” Schumer wrote on Twitter, using McConnell’s own words after the death of Justice Antonin Scalia in 2016. “Therefore, this vacancy should not be filled until we have a new president.”

“Now is not the time for a partisan battle over the next nomination for the Supreme Court,” Feinstein said. “People have already begun to vote. It’s clear that the next president must nominate a future justice and the next Congress must consider that nominee.”

Democratic presidential nominee Joe Biden was in lockstep with his party on Friday, writing in a statement: “The voters should pick a president, and that president should select a successor to Justice Ginsburg.”

According to NPR, Ginsburg dictated to her granddaughter in her final days that her “most fervent wish” was that she not be replaced on the Court “until a new president is installed.”

But the vacancy will also put pressure on the handful of Senate Republicans who have expressed concerns about confirming a Supreme Court Justice close to an election, as well as vulnerable Republicans in swing states.

Collins told The New York Times recently that she would not support seating a Supreme Court Justice in October, citing the proximity to the election. Collins praised Ginsburg in a statement on Friday night but made no mention of her position on the timing of a possible vote on a replacement. Collins was one of the deciding votes in Kavanaugh’s contentious October 2018 Senate confirmation and is trailing in some polls against her Democratic opponent, Sara Gideon.

In an interview Friday before Ginsburg’s death, Sen. Lisa Murkowski (R-Alaska) said she would not want to see a Supreme Court confirmation vote before the election.

“I would not vote to confirm a Supreme Court nominee. We are some 50 days away from an election,” Murkowski told Alaska Public Radio.

Sen. Mitt Romney (R-Utah), who has broken with Trump in the past and voted to convict the president during his impeachment trial, on Friday said nothing on the timing of the vote but praised Ginsburg.

Yet that leaves McConnell with a vote to spare, and Vice President Mike Pence could vote on a nomination in the event of 50-50 tie.

Other Republican senators were quick to weigh in. Sen. Martha McSally (R-Ariz.), who is up for reelection this year and is behind her Democratic challenger Mark Kelly in most polls, said Friday that “this U.S. Senate should vote on President Trump’s next nominee for the U.S. Supreme Court.”

The Senate was expected to recess later this month after passing a government funding bill, giving lawmakers a month in their home states to campaign for reelection.

The prospect of Ginsburg’s passing had already animated a fierce effort by lawmakers and Trump to fill a potential Supreme Court vacancy. Trump recently named a list of conservatives, including several sitting GOP senators, from which he intends to pick the next justice.

When Scalia died in February 2016, McConnell argued at the time that the choice should be left to voters given that Scalia’s death occurred in a presidential election year. But McConnell has emphasized that when the White House and Senate are controlled by the same political party, such restraints should not apply, and he has repeatedly signaled a willingness to move a Supreme Court nomination even in close proximity to the election.

Unlike other recent vacancies, though, a Republican nominee is likely to shift the Supreme Court sharply to the right. Trump’s previous two nominees, Kavanaugh and Neil Gorsuch, are among the court’s more conservative members but replaced similarly conservative justices.