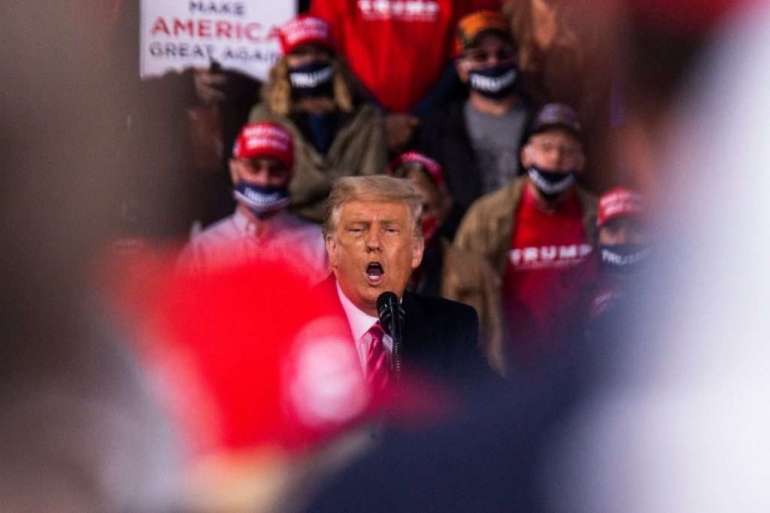 Trump is expected to make a formal nomination as soon as the middle of next week, according to two people familiar with the plans.

Judge Amy Coney Barrett, who joined the U.S. Court of Appeals for the Seventh Circuit in late 2017 and who Trump considered for an earlier vacancy, is considered the leading contender, according to four people familiar with the matter. She has strong support inside the White House Counsel’s office, which had already vetted her paperwork when she was nominated for the appellate court, according to one of the people.

Senate Majority Leader Mitch McConnell vowed Friday night that the nominee will be put to the Senate floor for a vote, though some of his fellow Republicans balked and Democrats quickly called for a delay until after the Nov. 3 election when control of the White House and Senate could flip.

Trump was initially left in the dark about Ginsburg’s death while on stage for a campaign rally in Bemidji, Minn., according to White House press secretary Kayleigh McEnany.

After Trump walked off the stage, making a fist pump to the beat of the Village People’s “YMCA,” the president was seen talking to top aides John McEntee and Dan Scavino while he walked over to reporters.

He then turned to board Air Force One back to Washington.

The White House started working Friday night, just after word of Ginsburg’s death around 7:30 p.m., to quickly assemble a communications team needed to push through the confirmation, according to a person close to the White House. “The discussions are happening right now,” the person said.

The effort was immediately seen by Trump aides and allies as a potential game-changer for their struggling campaign, with the president under fire throughout the spring and summer for his coronavirus response and struggling economy.

With just over six weeks before the election, national polls show Trump lagging far behind Democratic nominee Joe Biden. His standing has fallen in many key states, such as Ohio and Iowa, and even in traditionally red states, such as Arizona and Georgia, in both public and campaign polls.

That’s in part because Trump has struggled to craft a coherent case for his reelection and has spent months veering from one hot-button issue to another. But the Supreme Court fight will focus the campaign and energize supporters in a way little else could have, according to interviews with half a dozen Trump allies.

“All this election stuff and we signed an [executive order] on this or that — it doesn’t matter,” a White House official said. “This is the election.”

Trump frequently touts the hundreds of federal judges, including Supreme Court Justices Neil Gorsuch and Brett Kavanaugh, appointed and confirmed during his tenure, even if he often inflates the total number. It was a point he made again Friday night while on stage in Minnesota.

“It shows our voters that’s why they elected him in the first place and that’s why he needs to be reelected,” a Republican close to the president said.

“The left is already activated and Trump has coalesced the left faster than they’ve ever been able to do before,” said Lanza, the former campaign aide. “This brings home disaffected Republicans because now they know what’s really at stake.”

Trump released a list of potential picks for a vacancy last week, months after the Supreme Court dealt him a series of blows on cases pertaining to hot-button issues that have fired up his base of conservative evangelicals in the past, including immigration, abortion and LGBTQ protections.

“Any nominee should have a long record of being a constitutional conservative — applying the law and not making it up,” said Tom Fitton, president of Judicial Watch, a conservative group that is in touch with the White House.

He said “it’s doable” for Trump to fill the seat before the election, given that Ginsburg’s nomination took just 42 days from the day President Bill Clinton nominated her to the final Senate vote in the summer of 1993, according to the Congressional Research Service. (The average number of days from nomination to confirmation since 1975 is nearly 70 days.)

Trump released his first list of potential picks for a vacancy during the 2016 campaign, a move that helped bring skeptical social conservatives into his camp enough to support his upset victory over Hillary Clinton.

“We are not running solely on the Covid response and the economy,” said Dan Eberhart, a major Republican donor and CEO of a drilling services company. “This resets the race.”