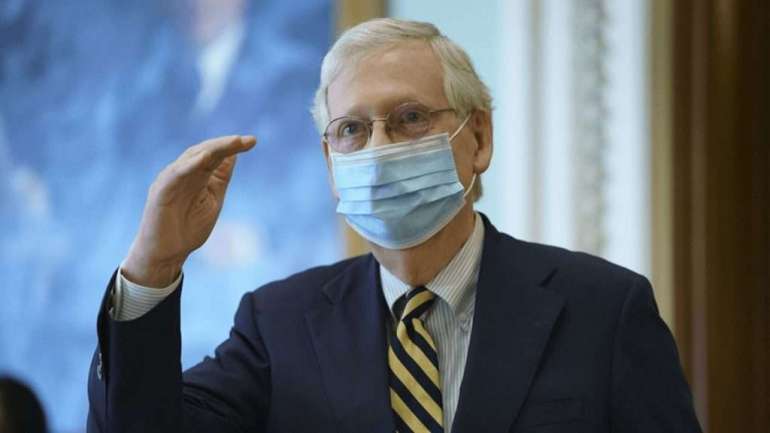 “Apart from that one strange exception, no Senate has failed to confirm a nominee in the circumstances that face us now,” McConnell said, referring to Supreme Court Justice Abe Fortas, who served on the high court in the 1960s but resigned over ethics issues. “The historical precedent is overwhelming and it runs in one direction. If our Democratic colleagues want to claim they are outraged, they can only be outraged at the plain facts of American history.”

McConnell added that in 2016, Obama asked “Senate Republicans for an unusual favor that had last been granted nearly 130 years prior.”

The Kentucky Republican further highlighted that the Senate is merely responding to voters, noting that Senate Republicans expanded their majority in 2018 after the contentious Supreme Court confirmation of Brett Kavanaugh. Sen. Susan Collins is however facing a backlash this year from Democratic voters over her support for Kavanaugh and is currently trailing in the polls in her Senate race in Maine.

“Ironically, it was the Democratic leader who went out of his way to declare the 2018 midterms a referendum on the Senate’s handling of the Supreme Court,” McConnell said. “In his final speech before Kavanaugh was confirmed, he yelled over and over at the American people to ‘go vote!’ He told Americans to go elect senators based on how they’d approached their advice-and-consent duties over those weeks. Unfortunately for him, many Americans did just that.”

But Senate Minority Leader Chuck Schumer shot back on Monday, saying the majority leader and Senate Judiciary Chair Lindsey Graham (R-S.C.) are “making a mockery” of their previous position.

“Why not just come to the floor and say I’m going to do whatever is best for my political party, consistency be damned, reason be damned, democracy be damned,” Schumer said. “They know there is no reason, no reason, no argument, no logic to justify flipping your position 180 degrees and calling it some kind of principle. It is not.”

Republicans argue that Democrats in 2016 called for the confirmation of Garland during an election year, but Democrats say that with the Garland nomination Republicans set a new standard.

Since Ginsburg’s death on Friday, Graham, who is up for reelection, has faced a torrent of accusations of hypocrisy. The South Carolina Republican, who said he would not confirm a nominee during a presidential year in 2018 during the Kavanaugh confirmation, has since said he would in fact vote for a nominee during an election year. On Monday, he reiterated that he changed his mind after the ugly confirmation process for Kavanaugh, who faced allegations of sexual assault.

McConnell and Schumer’s dueling floor remarks are only the beginning in what’s expected to be a brutal Supreme Court fight. McConnell has repeatedly vowed that Trump’s nominee will receive a vote on the Senate floor, though he hasn’t specified whether the vote will take place before or after the election. Trump said Monday he will announce his pick Friday or Saturday.

Schumer said Monday that at no time in the Senate’s history have senators confirmed a Supreme Court nominee so close to a presidential election, which is just 43 days away.

McConnell, however, countered that the Senate has more than enough time to confirm Trump’s nominee, noting that Justice Sandra Day O’Connor was confirmed in 33 days. The confirmation process typically takes about 40 days.

There is little Democrats can do to stop the nomination from going through. So far, only two Senate Republicans — Collins and Lisa Murkowski of Alaska — said the Senate should wait until after the election. Sen. Mitt Romney (R-Utah), who has broken with Trump in the past and even voted to convict him during the impeachment trial, has not yet said where he stands on the confirmation.

But Democrats say if Republicans move forward they will fundamentally change the Senate as an institution.

“How can we trust each other if when push comes to shove, when the stakes are the highest, the other side will double-cross their own standards when it’s politically advantageous,” Schumer said. “Tell me how this would not spell the end of this supposedly great deliberative body.”