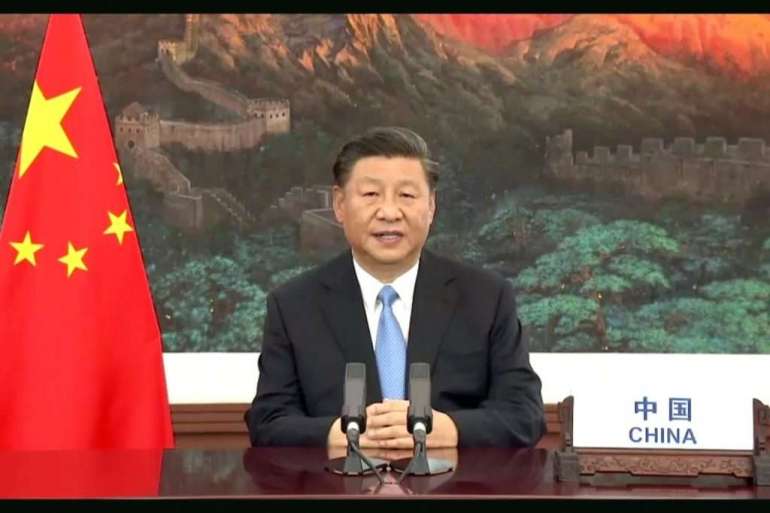 “We call on all countries to pursue innovative, coordinated, green and open development for all, seize the historic opportunities presented by the new round of scientific and technological revolution and industrial transformation, achieve a green economy of the world economy in the post-Covid era and thus create a powerful force driving sustainable development,” Xi added.

The comments come as Trump prepares to officially pull the U.S. from the Paris climate accord, making the world’s largest economy the only nation outside the global pact. He attacked China’s environmental record Tuesday, saying it was the world’s leading polluter as he defended the U.S. record.

“China’s carbon emissions are nearly twice what the U.S. has and it’s rising fast,” Trump said. “By contrast, after I withdrew from the one-sided Paris Climate Accord, last year America reduced its carbon emissions by more than any country in the agreement. Those who attack America’s exceptional environmental record while ignoring China’s rampant pollution are not interested in the environment, they only want to punish America and I will not stand for it.”

Experts have said the U.S. decline in CO2 emissions has come largely from natural gas supplanting coal in the power sector and the sharp rise of renewable energy sources — both trends that started under previous presidents. And a new study also shows Trump administration policies will increase U.S. greenhouse gas emissions over the next 15 years.

Xi’s announcement drew a contrast with the direction it was heading on climate compared with its global rival.

“This is designed to blow the U.S. away,” said Li Shuo, a policy expert with Greenpeace East Asia.

The new goals Xi outlined were unexpected because global climate talks scheduled for this fall were postponed an entire year due to the coronavirus pandemic. The upcoming negotiations were seen as a crucial political moment to increase the ambition of national climate commitments, with many climate activists and policymakers lamenting the lost opportunity to press for more urgency.

A U.N.-convened panel of scientists has warned the world must neutralize carbon emissions by 2050 to avoid baking in the worst effects of climate change.

Xi’s announcement comes on the heels of reports that China has prepared to loosen environmental regulations to continue its expansion of coal-fired power plants. International climate experts believed China had been taking advantage of the U.S. absence on the global climate stage to simultaneously claim leadership on the issue while also boosting heavy-emitting industries and trade through its Belt and Road Initiative, an investment effort in Africa and Asia that’s spurred new fossil fuel development.

“No one was there of sufficient leverage in the international system to call them out when they would do things that were totally counterproductive if not harmful to international climate action,” said Andrew Light, a former State Department climate official during the Obama administration, in a recent interview.

At the EU-China summit last week, the Europeans urged China to promise to reach carbon neutrality by 2060 or risk facing tariffs from the economic block. EU officials also called on Beijing to speed its target of peaking its global warming emissions to 2025 and to commit to ending investments in new coal-fired power stations.

Xi said China would pursue “more vigorous policies and measures” and loftier targets tendered as part of the Paris climate accord process. They would build on prior emissions marks set through a mutual agreement between Xi and former President Barack Obama, who pledged U.S. economy-wide emissions cuts of 26-28 percent below 2005 levels by 2025.

The U.S. under Trump has moved further away from reaching the Obama goals, despite efforts to uphold those targets by states, cities and businesses that comprise about 70 percent of U.S. gross domestic product. Trump’s actions to slash Obama-era regulations will add 1.8 billion tons of greenhouse gases to the atmosphere by 2035, climate research firm Rhodium Group said in an analysis last week.

Karl Mathiesen contributed to this report.