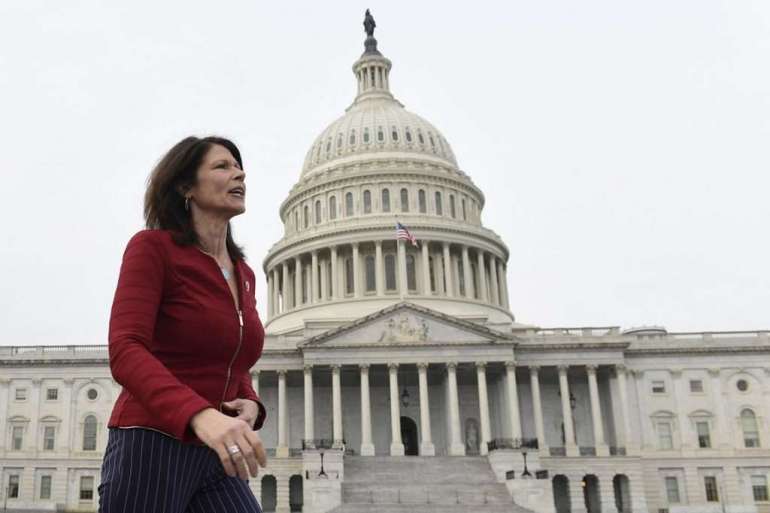 “I have had conversations in the last week that I would not think was possible,” said Rep. Ann Kuster (D-N.H.), who has been heavily involved with Democratic recruiting and campaigning in recent cycles.

In a sign of their growing optimism, Democrats canceled millions of October TV reservations for lawmakers like Reps. Jared Golden in Maine or Matt Cartwright of Pennsylvania — in two districts that Trump had won by about 10 points in 2016. And party officials also nixed ad time in a pair of purple Michigan districts belonging to freshman Reps. Haley Stevens and Elissa Slotkin, which Trump also won in the last presidential election.

Now Democrats are pouring that cash into capturing red seats — in Michigan, Colorado, Montana and Alaska — that the party hadn’t been eyeing until late in the election cycle as Trump sagged in the polls and GOP campaigns entered crisis mode.

The NRCC, the House Republicans campaign arm, declined to comment.

Overall, Democratic groups are providing air cover to protect roughly two dozen of their members and running offensive TV ads in about as many GOP-held districts from the third week of September through the first week of October, according to an analysis of data by from the ad-tracking firm Advertising Analytics.

At the same time, the Democratic Congressional Campaign Committee is sitting on nearly $105 million and armed with polling that shows Democrats ahead in districts that the president carried handily in 2016.

“It’s a combination of a lot of things,” DCCC Chair Cheri Bustos (D-Ill.) said in a brief interview, stressing that party officials began early with recruitment and on-the-ground staff in battleground districts. “We’re raising money like it’s falling from the sky.”

But Bustos also said that having Joe Biden at the top of the ticket for Democrats makes a difference in winning the kind of seats, as well as electoral votes, needed for an all-around victory in November. Recent polling shows Biden ahead by an average of about 7 points.

“Joe Biden is viewed as a guy who can sell in rural America,” Bustos said. “We probably won’t win a lot of these small towns, but you’ve got to be able to pick up enough votes where it adds up, and we can win these races. And that’s how Joe Biden is going to win these races, too.”

Democratic lawmakers and party officials insist they’re not making any assumptions in 2020, working aggressively to protect their endangered incumbents, particularly in Trump country.

But they also acknowledge that Republicans’ recruitment failures have shored up their incumbents and saved them millions of dollars. Members in swing districts, like Rep. Antonio Delgado (D-N.Y.), Lauren Underwood (D-Ill.) and Josh Harder (D-Calif.) are in such strong shape that the DCCC and House Majority PAC, Democrats’ chief congressional outside group, aren’t airing any TV ads to help them.

And they realize that the GOP’s dismal showing, as well as Biden’s consistently strong polling, has helped stretched the map into Arizona, Texas and North Carolina — unlike four years ago, when a less popular Hillary Clinton was seen as a drag in some House races.

“Not only are people feeling good about Biden, he’s up in a lot of places where Hillary wasn’t. He’s not toxic to voters,” Rep. Debbie Wasserman Schultz (D-Fla.) said.

“They may not be enthusiastically supporting him, they may even support Trump, but they don’t have malevolent feelings about Biden. That’s tremendously helpful because you don’t have the drag on our down-ballot races when the person is, not only going to the polls and voting for Trump, but they hate the guts of our candidate,” said Wasserman Schultz, a former chair of the Democratic National Committee.

Democrats are so confident heading into November that Speaker Nancy Pelosi has begun eyeing more elaborate math that goes beyond her majority in the House — specifically, looking at the party breakdown of state delegations in the unlikely event that the House would need to decide the election this fall. Pelosi has been looking specifically at states like Alaska or Montana, where a single win could hand Democrats control of the delegation.

Swing-district Democrats, particularly freshmen, are entering the final month of the election better positioned than they ever could have expected a year ago.

Just before the pandemic, endangered Democrats’ biggest threats would have likely involved GOP attack ads on the subject of impeachment, the Green New Deal or Medicare for All.

But the coronavirus pandemic and economic fallout upended this year’s narrative, making health care — once again — the biggest issue of the 2020 campaign.

Virtual town hall events for the most endangered Democrats now focus squarely on the health crisis and its battering of the economy, a far cry from a year ago, when question-and-answer sessions at lawmakers’ events were more likely to draw attacks against self-described socialists within the Democratic party, than present real questions about health care access.

Rep. Stephanie Murphy of Florida, who won a swing seat in 2016 and has gone on to help other moderate Democrats win in Trump country, said strong polling of Democrats, including Biden, does help incumbents breathe a sigh of relief.

“Unlike in other races, you don’t see Democrats running away from the top of the ticket as you might in other campaigns,” she said. “Certainly, that’s probably easier than having to run as a Democrat, running away from your top of your ticket.

But she also cautioned that polling — on both the state and district level — didn’t guarantee a win for Democrats if they can’t also deliver the votes.

“I really don’t know any pollster who has a good handle of what turnout is going to look like in a pandemic. So I think everybody really needs to keep running through the tape as hard as they can, irrespective of what the polls say,” Murphy said.