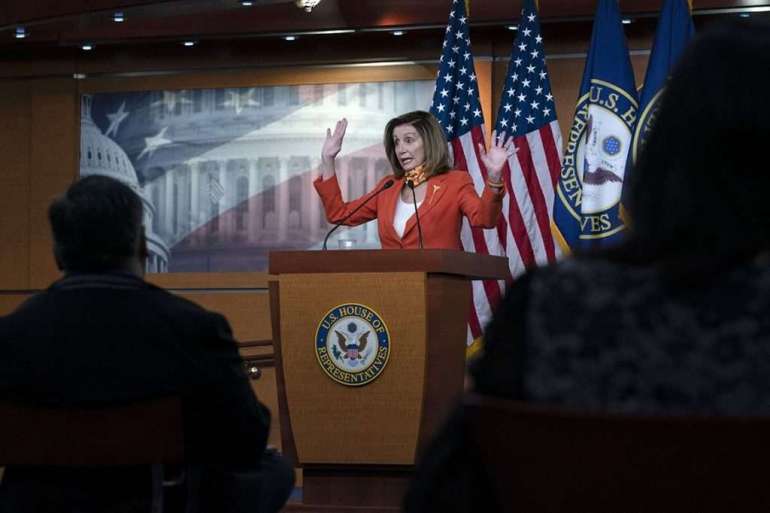 Top Democrats spent much of the weekend and Monday finalizing the roughly 2,152-page bill before releasing it Monday evening. A vote could happen as soon as Wednesday, though nothing has been scheduled and lawmakers and aides warned that timeline could easily slip.

The package is essentially a scaled back version of the House’s sweeping bill passed in May, which Republicans have already rejected. It includes nearly a half-trillion dollars to shore up state and local governments, as well as a second round of stimulus checks to most Americans. It also restarts the extra $600-per-week in federal unemployment benefits, which expired in late July.

The Democratic bill includes some new money for airlines and restaurants, two industries that have faced dramatic financial losses since the House’s last package this spring.

Pelosi held a call with her leadership team Monday afternoon to discuss the current strategy. The full Democratic Caucus will be briefed on the bill Wednesday morning.

This week’s vote on a Democratic proposal is intended to mollify an increasingly vocal group of moderate Democrats, who have demanded that Pelosi bring more pandemic aid bills to the floor, after key relief programs expired for millions of Americans.

But the House bill, if it passes, will do little to deliver real relief to the American public. The House Democrats’ proposal will stand virtually no chance of becoming law, and both parties acknowledge that this is the final week to strike an accord before Congress departs for its roughly month-long recess before Election Day.

Democrats and Republicans are still more than $1 trillion apart in coronavirus talks, which have been stalled for months despite mounting pressure from desperate U.S. businesses and households. And Pelosi has repeatedly said Republicans will have to bridge the trillion dollar gap, noting she sliced $1 trillion from Democrats initial $3.4 trillion proposal — something GOP negotiators have been unwilling to do.

“We’ve come down $1 trillion and they need to come up because we have to crush this virus,” Pelosi said on MSNBC Monday.

Pelosi and Mnuchin quietly restarted talks on coronavirus aid in recent days, after the two successfully navigated a short-term fix to avert a federal government shutdown on Sept. 30.

The two spoke briefly Sunday, and made plans to speak again Monday night. But Pelosi told MSNBC on Monday that Republicans would still need to commit to “much more” spending to reach a bipartisan deal on a relief package.

“When he’s ready to come back to the table we’re ready to have that conversation. But he has to come back with much more money to get the job done. So I’m hopeful. I’m optimistic,” Pelosi said.

Pelosi initially directed her committee chairmen to begin drafting a pared down coronavirus relief bill last week, shifting strategies after resisting calls for weeks to put a smaller stimulus package on the floor. Until then, Pelosi stood behind the $3.4 trillion Heroes Act the House passed in May, saying the onus was on Senate Republicans — not her — to take the next step.

But moderate Democrats, particularly those in the most vulnerable districts, were particularly uneasy with that strategy. Those Democrats, staring down the dwindling weeks before the election, have repeatedly sounded alarms in recent weeks, calling on leadership to redouble efforts to reach a bipartisan agreement.

“As of right now, this is the last week the House has votes before we head back to our districts,” said Rep. Josh Gottheimer (D-N.J.), who co-leads the bipartisan House Problem Solvers Caucus, which has pushed for months for the two parties to negotiate a deal. “It would be unconscionable for Congress to go home without taking action.”