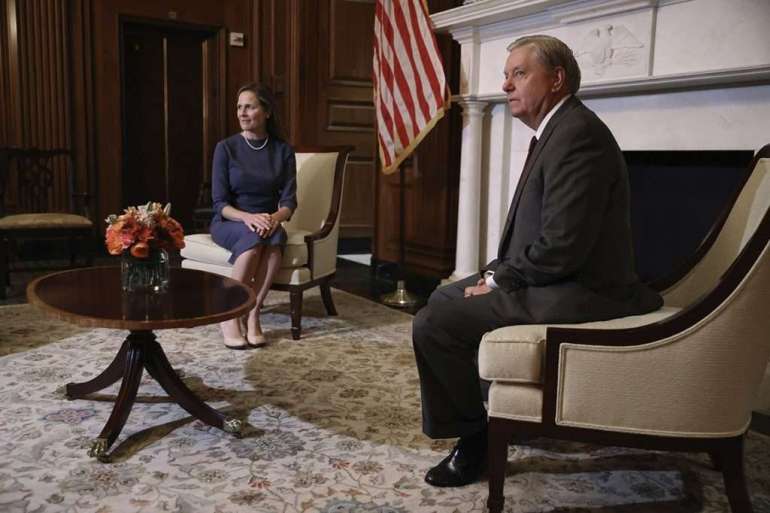 “If Hillary Clinton were president right now and Chuck Schumer were majority leader, the odds that the Senate would vote on a Supreme Court nomination are 100 percent,” said Sen. Ted Cruz (R-Texas), who met with Barrett.

The elaborate rituals of a Supreme Court nomination, which usually unfold over weeks or months, are being compressed to mere days under the Republican schedule. On Tuesday, Barrett held nine meetings with GOP senators, and she is expected to hold a similar number on Wednesday, meaning she’ll have met with roughly a third of the Senate GOP in just two days. The FBI background check on Barrett is expected to be completed before her Senate Judiciary Committee hearing begins on Oct. 12, according to a Republican aide.

If Barrett can stay on track, she will likely receive a committee vote on Oct. 22 and then a floor vote just days after. Even a short delay could push the confirmation past the election, which would be a major blow to Republicans. The Senate GOP’s 53-47 majority could be narrower in a lame duck session if Republicans lose the Arizona special election. There would be a huge political backlash if the party loses on Nov. 3 and then follows through on the lifetime appointment to the Supreme Court.

“The idea of doing it after the election, even though we would still be in our term and the president would be in his term and we’d be in the majority? I just think doing it before the election offers some political accountability,” said Sen. John Cornyn (R-Texas).

Additionally, the Supreme Court is slated to hear a challenge to the Affordable Care Act right after the election and Trump wants to have Barrett on the bench. Trump and Republicans have also insisted the court needs nine justices in case it needs to weigh in on a contested election. Of course, they were far less concerned with the eight-member court in 2016 when Barack Obama was still president and Trump and Hillary Clinton were locked in a razor-tight battle for the White House.

On Tuesday, Barrett’s responses to a Senate Judiciary Committee questionnaire were also released, an extraordinarily fast turnaround. Barrett disclosed that White House chief of staff Mark Meadows contacted her about the vacancy on Sept. 19, the day after Justice Ruth Bader Ginsburg died, and that two days later Trump offered her the job.

Senate Judiciary Chair Lindsey Graham (R-S.C.) has left little doubt that Barrett already has the support needed on the panel to move to the floor. Democrats can delay the nomination in committee for just a week.

“I want to give her a full, challenging hearing, but if they start playing games, we’ll just move on,” Graham said. “We have decided. I have decided. The hearing is for the benefit of the public. I’m going to vote for her.”

Democrats said they could find no precedent for the speed with which this nomination is being pushed through the committee. And they fear the timeline could result in a committee vote before Barrett even completes senators’ written follow-up questions.

“This is not normal. To have a vote on a confirmation days before the election is crazy. Right?” Sen. Richard Blumenthal (D-Conn.) told reporters Tuesday.

Democrats can make life difficult for the GOP, but there’s ultimately little they can do to delay or stop the nomination if Senate Majority Leader Mitch McConnell can put up 50 votes.

Barrett, meanwhile, has already started preparing for the hours of questioning she will undergo during her confirmation hearing, according to a White House official. Those sessions include preparations on both substantive issues such as Obamacare and abortion rights, as well as character issues. This includes whether Democrats question her about her membership in People of Praise, a majority-Catholic group of charismatic Christians, or her ability to separate personal religious beliefs from judicial decision-making.

Republicans are trying to portray Democrats and progressive advocacy groups as “anti-Catholic,” a claim that may be hard to uphold when the party’s presidential nominee, Joe Biden, is a Catholic as well. Senate Minority Leader Chuck Schumer said plainly on Tuesday that “not a single Democrat will make these attacks or make personal religious beliefs an issue.”

Female Republican senators are discussing holding a news conference to highlight Barrett’s personal story, according to two GOP aides. Such an event would be intended to soften the image of a judge Democrats say will scuttle the ACA, threaten abortion rights and rule in favor of Trump if the election is disputed.

The White House Counsel’s office and communications shop spent much of the weekend mapping out a schedule for Barrett, who has two weeks to undergo refresher courses on everything from antitrust and privacy jurisprudence to how past nominees have responded to questions on divisive social issues.

The rapid timeline is a major change for the Trump White House, which had nearly two months to prep Justices Neil Gorsuch and Brett Kavanaugh before their confirmation hearings.

Sen. Chuck Grassley (R-Iowa), who chaired the Judiciary panel during those confirmations, said Barrett’s 2017 confirmation as an appeals court judge made a truncated timetable appropriate.

“Look at what’s been done recently. You got [John Paul] Stevens in 19 days, you have [Ginsburg] in 42 days. This is about 40 days. What’s magic about it?” Grassley said.

And after recruiting former Sens. Kelly Ayotte (R-N.H.) and Jon Kyl (R-Ariz.) to aid Gorsuch and Kavanaugh, respectively, the White House is instead using White House counsel Pat Cipollone and Meadows as Barrett’s “sherpas” on Capitol Hill — helping her navigate meetings with senators that can range from congratulatory to confrontational.

One or both of them are expected to be in every meeting Barrett holds on Capitol Hill. Though Barrett is starting with GOP senators that are sure to vote to confirm her, she may eventually meet with moderate Democrats like Joe Manchin of West Virginia or Kyrsten Sinema of Arizona. An aide said Sinema plans to meet with Barrett. Some Democrats announced they won’t sit down with Barrett after Obama nominee Merrick Garland was denied even a hearing in 2016.

Following her courtesy meetings on Capitol Hill this week, Barrett will spend each evening examining her own body of work, including past judicial opinions, law journal submissions and speeches, and discussing potential questions and responses with White House counsel’s office staffers and personal advisers. Several of Barrett’s Notre Dame law school colleagues have offered personal support to her during the process or volunteered for media appearances focused on promoting her legal scholarship.

White House director of strategic communications Alyssa Farah and deputy press secretary Brian Morgenstern have taken the lead on all Barrett-related messaging from the West Wing, while Julia Hahn, a former Breitbart writer who now leads surrogate and coalition communications for the White House, is overseeing an internal rapid-response operation that will fact-check claims about Barrett and develop talking points for outside allies.

Barrett’s husband and children may also be briefed on the confirmation process in the coming days — a conversation that would likely include advice on how best to support Barrett and withstand attacks that could be leveled against them. While the families of nominees typically refrain from speaking publicly throughout the process, an exception was made for Kavanaugh’s wife, Ashley, when the couple sat for an interview with Fox News to refute sexual assault allegations leveled against him.