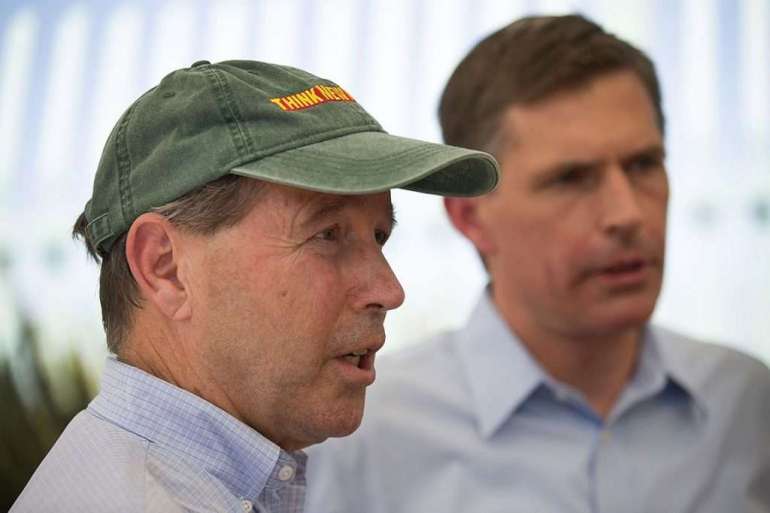 The state’s Rep. Deb Haaland and Sens. Tom Udall and Martin Heinrich have become increasingly visible in pitching themselves as potential heads of the Interior Department, sources following the jockeying said.

Haaland, the vice chairman of the House Natural Resources Committee, didn’t deny her interest in the role as she touted her potential inclusion in a potential candidates’ list as a historic first.

“I’m honored that people believe in my leadership in protecting our public lands and combating climate change,” said the first-term House member who previously served as the state’s Democratic Party chair. “It is also meaningful that our country has finally reached the point where having the first Native American Cabinet Secretary is a serious consideration. I am open to those opportunities where I can best serve New Mexico, Indian Country and our country at large.”

Udall’s office declined to comment, and pointed to his March 2019 announcement that he would not seek reelection to the Senate but that he was not done with public life.

“Now, I’m most certainly not retiring,” Udall said in that video. “I intend to find new ways to serve New Mexico and our country after I finish this term. There will be more chapters in my public service to do what needs to be done.”

A source familiar with Udall’s thinking told POLITICO he would consider the position if asked.

Udall comes from a storied political family. His father, Stewart Udall, led Interior for eight years under the Kennedy and Johnson administrations where he oversaw the dramatic expansion of millions of acres of public lands and assisted in passage of bedrock environmental statues, such as the Land and Water Conservation Fund.

Haaland’s backers are pushing for her to make history as the first Native American to serve in a presidential cabinet. She’s also teamed up with Udall as a lead sponsor of a resolution S. Res. 372 (116) setting a national goal of conserving 30 percent of U.S. land and oceans by 2030.

Staff for Heinrich, now in his second term in the Senate, demurred when asked about his interest, with one aide saying that he “is laser focused on doing absolutely everything in his power to ensure Joe Biden is elected president, so we can end Trump’s war on our public land and put millions of Americans back to work restoring our natural resources.”

Heinrich has played key roles behind-the-scenes in getting two major public lands packages —the John D. Dingell, Jr. Conservation, Management, and Recreation Act, S. 47 (116) and the Great American Outdoors Act, H.R. 1957 (116) — across the finish line this Congress. And he led Democrats’ charge to remove William Perry Pendley from atop the Bureau of Land Management, and is well-connected within influential sportsmens groups.

All three New Mexicans have been visible surrogates for the Biden campaign. Haaland is a member of the campaign’s Climate Engagement Advisory Council and hosted a fundraiser for the campaign alongside Udall in late June. Heinrich hosted his own fundraiser with members of the outdoors community on Wednesday and has been heavily involved in the Sportsmen and Sportswomen for Biden push.

Udall has also been involved in the Biden campaign’s attempts to make inroads within the Mormon community, leading a late September town hall with Latter-day Saints for Biden.

The competition to head Interior has so far been a relatively polite affair compared to the wider clamor among Democratic power players who are angling for spots in a potential Biden administration. The two camps of the Democrats — progressives and moderates — are jostling over who would best steer the party’s future course on energy and climate change should the former vice president prevail.

People informally advising Biden have also told POLITICO that Biden’s inner core of confidants have been tight-lipped about who they might be considering for possible White House staff.

Still, people following the internal Biden organization workings said informal discussions are occurring about who might be tapped for jobs at Interior, the Department of Energy and the Environmental Protection Agency.

“I think the conversations right now are happening about what a Cabinet could look like,” said Julian Brave NoiseCat, vice president of policy at Data for Progress, who has been in contact with Biden’s staff.

Biden’s campaign and transition teams had been focused on identifying people to fill top foreign, economic and health care roles, until the past few weeks, with discussions on energy and climate positions at a less advanced stage and largely confined to informal energy advisers, according to people familiar with the matter who requested anonymity to discuss the campaign’s internal workings. Among the topics of discussion is whether to appoint a “climate czar” to help coordinate an administration-wide effort on the issue that Biden has listed as one of his top priorities.

A person familiar with Biden’s transition planning sought to tamp down speculation about staffing a possible new administration. “Addressing the climate crisis is of critical importance, but discussion of ‘czars’ or other structural considerations is speculative and premature,” the person said. “Decisions about staffing and structure will only happen after the election on Nov. 3rd.”

Progressives are encouraged that the Biden camp has been consulting Evergreen Action, the green group that includes former staffers on Washington Gov. Jay Inslee’s presidential campaign. But they are wary of the campaigns links to former Energy Secretary Ernest Moniz, who is independent director on the board of utility owner Southern Company, and Lonnie Stephenson, a member of the transition team who is president of the International Brotherhood of Electrical Workers.

“It is certainly concerning that we continue to hear these strains of ‘all-of-the-above’ policy from the Biden campaign,” said Collin Rees, a senior campaigner at Oil Change International. “We fear a bringing back together of many of the voices from the Obama administration.”

For EPA, Heather Zichal, the former Obama White House deputy assistant energy and climate change, has been mentioned as one possible candidate, though progressives oppose any top role for her because of she took a spot on the board of LNG company Cheniere Energy. Heather Toney, a clean air activist who is currently the national director for Moms For Clean Air Force and a former regional director of the EPA’s Southeast Region, has also been mentioned as someone moderates would like the Biden campaign to consider.

Toney said she had not spoken with anyone in the Biden campaign, but did not dismiss the idea of joining a potential administration.

“The Vice President’s attention seems to be exactly where it should be: squarely focused on addressing the concerns of the American people and sharing his climate plan,” Toney said in a statement.

Among the party’s left flank, opposition is strong to any candidates that have ties with the oil and gas industry. Progressive activists are pushing to exclude anyone who’s had those relationships, although party moderates contend that experience with fossil fuels is needed to implement climate change policies designed to help wind down greenhouse gases such as methane emissions.

Progressives have been encouraged by the Biden campaign’s transition ethics rules, unveiled last week, that specifically bar former “leaders at fossil fuel” companies from advising him. But people familiar with the internal discussions say the progressives may have little leverage over those decisions.

Many came from Sen. Bernie Sanders’ (I-Vt.) camp and are relative newcomers to Biden’s team, so they are less likely to have the influence to sway a cabinet pick, said a Congressional Democrat aide who has been following the jostling.

“It’s hard to come in from the cold,” said the aide, who requested anonymity to discuss inter-party politics.

Instead, progressive groups might instead focus on influencing who a Biden administration might choose for staff below the Cabinet level who might actually write policy focusing on climate change or other issues, the aide added.

“The cabinet is a shiny object,” he continued. “They might put all their chips on … people lower down.”