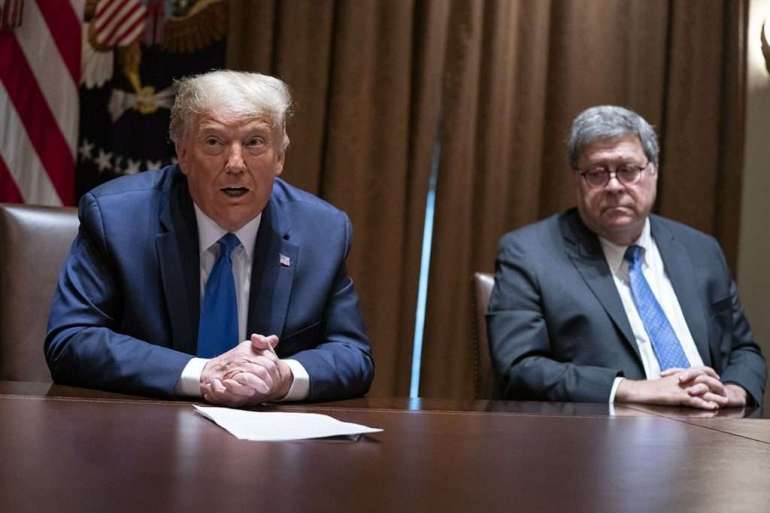 “It’s a disgrace. It’s an embarrassment,” Trump added. “See, this is what I mean with the Republicans. They don’t play the tough game.”

The apparent preelection fizzle began circulating earlier this week, coinciding with a flurry of angry tweets from the president, in which he repeatedly demanded the jailing of his political enemies; he has accused a slew of Obama administration officials of unfairly and illegally targeting him during the 2016 campaign and the presidential transition period, without citing evidence.

Moreover, the president’s allies in Congress and within the administration have been releasing declassified documents related to the Russia probe in recent days, fueling speculation that they were trying to fill the void being left by Durham, who was tapped by Barr to examine the origins of the Russia investigation. That Durham cleared the documents for public release suggests they will not be used in a criminal prosecution.

Barr has cooperated with GOP senators as part of those declassifications, as has Director of National Intelligence John Ratcliffe, a former Republican congressman who gained popularity on the right as a vocal defender of Trump.

Barr has previously been publicly critical of the president’s forays into Justice Department investigations, lamenting that Trump’s tweets about ongoing matters within the department make his job more difficult. But Barr has remained silent as Trump’s attacks on the DOJ have ratcheted up in recent weeks. And his office has declined requests for comment about Trump’s recent tirades against him.

Senate Judiciary Chair Lindsey Graham (R-S.C.) and Senate Homeland Security and Governmental Affairs Chair Ron Johnson (R-Wis.) have been leading the charge for Trump on Capitol Hill, conducting sweeping reviews of the Russia probe and serving as outlets to publicly release information from Barr and Ratcliffe that purports to benefit the president politically. Democrats have blasted the GOP-led investigations as a waste of time and an abuse of the Senate’s oversight authority.

Johnson, appearing on Fox News Friday morning, escalated his rhetoric with unsubstantiated claims about an “attempted coup” against Trump during the presidential transition period in 2016 and 2017, adding that “there was no peaceful transition.”

Trump had been pushing for a more aggressive posture from his attorney general, in particular, as he sought indictments of top Obama administration officials. Earlier this week, Trump channeled his grievances via tweet, demanding in one post that Barr immediately arrest and jail former President Barack Obama, former Vice President Joe Biden and Hillary Clinton, Trump’s 2016 Democratic opponent.

During that Twitter blitz, Trump said he was declassifying all documents related to the Russia probe. That declaration led a federal judge on Thursday to direct the Justice Department to confer with the White House about the president’s official position on declassification of those documents — including if it means special counsel Robert Mueller’s entire report should be made public without redactions.

Ratcliffe announced on Wednesday that he had transferred nearly 1,000 pages of documents to the Justice Department for their use in Durham’s investigation.

Durham’s investigation has netted one indictment so far; a former FBI lawyer pleaded guilty to altering an email that was used to obtain a surveillance warrant for a former Trump campaign adviser.