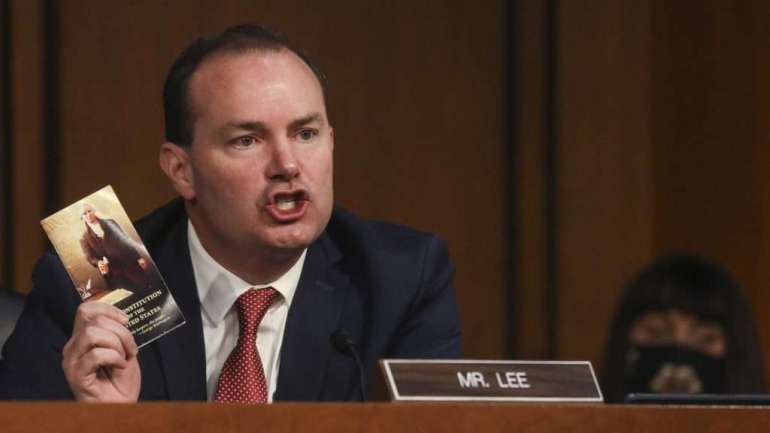 Lee was one of two GOP senators, along with North Carolina’s Thom Tillis, who contracted the coronavirus in the days after attending a crowded White House Rose Garden ceremony on Sept. 26 at which President Donald Trump announced his nomination of Barrett to replace the late Justice Ruth Bader Ginsburg.

A maskless Lee embraced other attendees at the ceremony — which was accompanied by indoor receptions and has since been described as a “superspreader event” by Dr. Antony Fauci, the nation’s top infectious disease expert.

Lee said he began experiencing symptoms similar to allergies on Oct. 1 and was subsequently tested for the coronavirus. He received his positive results later that day and said he would enter 10 days of quarantine.

Other senators who came into contact with Lee, including Texas Republican Ted Cruz, appeared at Monday’s hearing from a remote location after deciding to quarantine for 14 days, per guidelines from the Centers for Disease Control and Prevention.

Tillis, who also sits on the Judiciary Committee, participated virtually, as well. When he announced his diagnosis on Oct. 2, he reported experiencing no symptoms.

Shortly after the hearing began Monday, Lee told a local Utah radio station that he felt “great” and had been “cleared” to attend earlier in the morning by the Capitol’s attending physician, according to The Salt Lake Tribune. “Good as new, ready to go, and am excited for today’s hearing,” he said.

In a letter from the congressional physician released by the senator’s office Monday, Dr. Brian Monahan wrote that Lee had “met criteria to end COVID-19 isolation for those with mild to moderate disease.”

“Specifically, it has been greater than 10 days since symptom onset, you have had no fever in absence of fever reducing medication for at least 24 hours, and your other symptoms have improved,” Monahan wrote. “The CDC does not recommend repeat SARS-CoV-2 PCR testing if these criteria are met.”

The CDC recommends that people who have tested positive for Covid-19 isolate for at least 10 days and perhaps longer if they still have symptoms.

Ahead of the hearing Monday, Democrats called on Senate Judiciary Chairman Lindsey Graham to require coronavirus testing for senators. But the South Carolina Republican, citing guidance from the congressional physician, rejected those requests.

Last week, Graham refused to take a coronavirus test in advance of a debate with Democratic Senate candidate Jaime Harrison, resulting in the cancellation of the forum.

“All I can say is, I don’t know what it’s like at CNN, but you can’t demand that all of your colleagues be tested before you go to work if there’s no reason,” Graham told reporters Monday, responding to Democrats’ criticism.

“I was tested a week ago Friday. I was negative. I feel fine,” he said. “The CDC guidelines do not require mandatory testing.”

Graham also defended his leadership of the Judiciary Committee, saying the hearing was being run “safely” and in a “CDC compliant” manner.

But Sen. Richard Blumenthal told reporters Monday that he had been tested twice recently and remained “concerned” about sufficient mask-wearing in the committee hearing room.

“I wish my colleagues were doing the same thing,” the Connecticut Democrat said.

Andrew Desiderio and Burgess Everett contributed to this report.