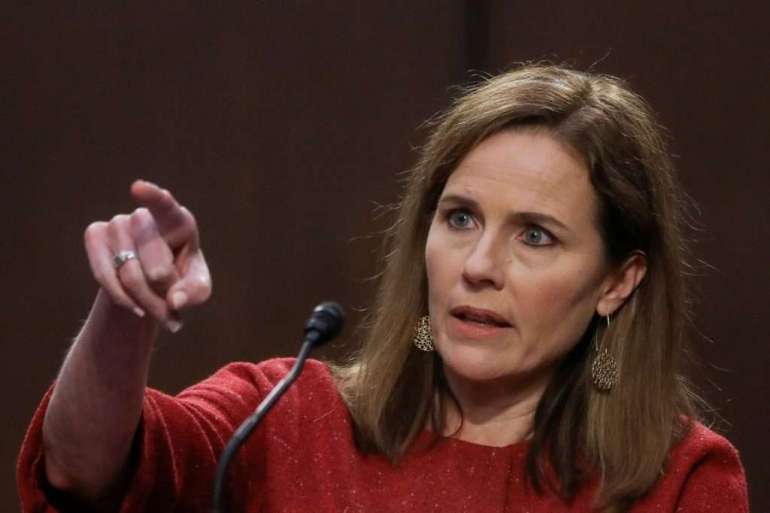 White House chief of staff Mark Meadows indicated that the president was satisfied, too, saying in an interview: “No one’s questioned her qualifications, which I find to be the remarkable thing.”

Over the course of 11 hours, Barrett rarely, if ever, tripped up as she faced questions from Democrats. But she repeatedly declined to answer inquiries from them about her views on abortion, Obamacare, same-sex marriage and the upcoming election, referencing the long-standing tradition of judicial nominees refusing to weigh in on specific issues that might come before the court.

With President Trump’s reelection prospects looking slimmer by the day, Republican groups and lawmakers are hedging their bets on Amy Coney Barrett as the future of conservatism.

Barrett also refused to answer a question about whether the president could pardon himself and did not address Trump’s hesitance to commit to a peaceful transfer of power if he loses the election.

Her posture frustrated Democrats, who have zeroed in on health care as their top issue in the Supreme Court fight — in particular, protections for Americans with pre-existing health conditions. Those protections were enshrined in the Affordable Care Act and could be eliminated as a result of a pending case before the court, which begins oral arguments on Nov. 10.

“These are life-or-death questions for people,” said Sen. Dianne Feinstein of California, the committee’s ranking Democrat.

As Democrats sought to tie Barrett to Trump’s promises to gut Obamacare, Barrett repeatedly emphasized that she did not have a “deal” with the president on how she would conduct herself as a Supreme Court justice because such agreements would be a “gross violation of judicial independence.”

“I am not here on a mission to destroy the Affordable Care Act,” Barrett said, asserting that she was not “hostile” to the 2010 health care law.

Barrett added that the legal issue at hand in California v. Texas, the upcoming Supreme Court case that could decide the fate the Affordable Care Act, was different than those in previous Supreme Court cases upholding the 2010 law.

Democrats, however, cited Trump’s previous statements suggesting he would only appoint justices who would vote to scrap the law. Several senators also pressed Barrett on her 2017 criticism of Chief Justice John Roberts’ decision to uphold Obamacare.

“You were added to the Supreme Court shortlist after you wrote that article and today my Republican colleagues who themselves have promised to repeal the ACA are rushing through your nomination so you can be seated in time to hear this case,” Coons said.

Democrats landed some notable punches, including when they highlighted Barrett’s refusal to say whether the Constitution gives the president authority to delay the election. Only Congress can move the date of an election, though Trump has floated a delay over unsubstantiated claims of voter fraud associated with mail-in ballots.

Later, under questioning by Sen. Amy Klobuchar (D-Minn.), Barrett became visibly annoyed as the Minnesota Democrat and former presidential hopeful interrogated her about her past comments about the landmark 1973 abortion case, Roe v. Wade.

Barrett told Klobuchar that she would not consider Roe to be a “super-precedent” like Brown v. Board of Education, the landmark case that desegregated schools, because there remain challenges to Roe and efforts to overturn it.

But, she cautioned, that does not mean that she believes Roe should be reversed. Democrats have pointed to Barrett’s past writings and endorsements to suggest that she would vote to restrict abortion rights.

Barrett also apologized for using the term “sexual preference” earlier in the hearing when addressing same-sex marriage, saying she “didn’t mean, and would never mean, to use a term that would cause any offense in the LGBTQ community.”

While Senate Democrats focused their questioning on health care and abortion rights, they did not bring up Barrett’s Catholicism, as Senate Republicans had predicted.

Barrett repeated to senators that she had no political agenda, and frequently cited her current role as a judge on the 7th Circuit Court of Appeals when asked about her views on specific issues.

Senate Republicans often came to Barrett’s defense, arguing that Democrats were asking her to violate the so-called “Ginsburg rule,” under which the late Justice Ruth Bader Ginsburg said it “would be wrong… to say or to preview in this legislative chamber” how she would vote on a specific issue that could come before the court.

“It is imperative that you uphold those standards and I applaud you for doing so,” said Sen. Mike Lee (R-Utah). “On no planet is it appropriate for anyone to suggest that that’s a political talking point to suggest ‘I’m not going to indicate how I’m going to rule in a particular case.’”

Senate Republicans are aiming to confirm Barrett to the high court by the end of the month, ensuring that she would be present for the oral arguments for the Trump administration’s Obamacare challenge.

Barrett, a devout Catholic, also pledged to set aside her religious beliefs if she is confirmed to serve on the high court. Under questioning from Judiciary Committee Chairman Lindsey Graham (R-S.C.), Barrett said “I can” and “I have done that in my time on the 7th Circuit.”

In the coming weeks the high court could also be forced to weigh in on the presidential election results if there are disputes in individual states. Democrats have called on Barrett to recuse herself from those potential cases given recent statements from the president about having a nine-justice court in time for the election.

Barrett did not commit to recusing herself from those cases, but said she would “fully and faithfully consider the law of recusal.”

Tuesday marked Barrett’s first time answering questions from senators as a Supreme Court nominee. She will have a second day of questions Wednesday. Thursday’s session will consist of an outside panel of experts.

Graham has also scheduled a committee vote to send her nomination to the Senate floor on Thursday, though a final vote on Barrett’s nomination is slated for Oct. 22.

Trump nominated Barrett to fill the seat of Ginsburg, who died Sept. 18. Senate Democrats have accused Republicans of hypocrisy for moving forward with confirming Barrett so close to Election Day, after blocking President Barack Obama’s nominee Merrick Garland in 2016. But Senate Republicans have argued that 2020 is different because the White House and the Senate are controlled by the same party, unlike in 2016 when a Democrat was in the White House.

Burgess Everett and John Bresnahan contributed to this report.