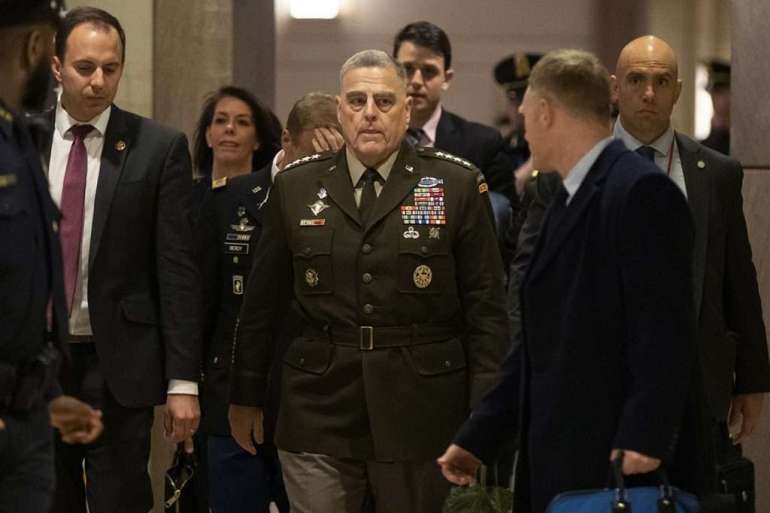 The military has strict rules against uniformed service members participating in political campaigns, and the ad is just the latest example of the president or those around him pulling the nation’s highest-ranking officer and other Defense Department officials into the political realm.

“As a matter of long-standing policy, military service members and federal employees acting in their official capacity may not engage in activities that associate the DOD with any partisan political campaign or elections, candidate, cause or issue,” the DOD’s website states in a post from March 2019.

Active-duty service members are prohibited from participating in fundraisers, speaking before partisan gatherings and wearing military uniforms at campaign events, according to DoD.

President Trump has demanded to know the results of the election on Nov. 3, despite the fact that it could be days until we know the winner. But if there is a clear winner on election night, it’ll almost certainly be bad news for Trump.

Milley himself has in recent weeks stressed the military’s apolitical nature, as politicians prepare for the possibility of a contested election and as Trump repeatedly suggests he might not accept the results if he is not declared the winner.

The military plays no role in domestic politics, Milley told NPR on Sunday in a rare interview.

Milley added that he is “very confident” in the ability of American institutions to manage election disputes.

“This isn’t the first time that someone has suggested that there might be a contested election,” Milley said. “And if there is, it’ll be handled appropriately by the courts and by the U.S. Congress. There’s no role for the U.S. military in determining the outcome of a U.S. election. Zero. There is no role there.”

Jim Golby, a former Pentagon official who is now a senior fellow at the Clements Center at the University of Texas of Austin, called the ad “a disturbing violation of civil-military norms by the President’s campaign.”

“There is simply no reason for a sitting chairman of the Joint Chiefs to be included in an advertisement paid for by the campaign,” Golby said. “Milley should denounce his inclusion in the ad, but the president never should have put him in this situation.”

Spokespeople for the Pentagon and the Trump campaign did not immediately respond to a request for comment.

Both Milley and Defense Secretary Mark Esper took pains to separate themselves from politics this summer, after Trump staged a photo op holding a bible in front of St. John’s Church on June 1. Esper posed for the photo while Milley stood to the side. Esper later said he didn’t know that law enforcement would be clearing Lafayette Square ahead of the event, and Milley expressed regret for taking part.

The ad featuring Esper and Milley surfaced a day after Anthony Fauci criticized the Trump campaign for including him in an ad.

“The comments attributed to me without my permission in the GOP campaign ad were taken out of context from a broad statement I made months ago about the efforts of federal public health officials,” he said.