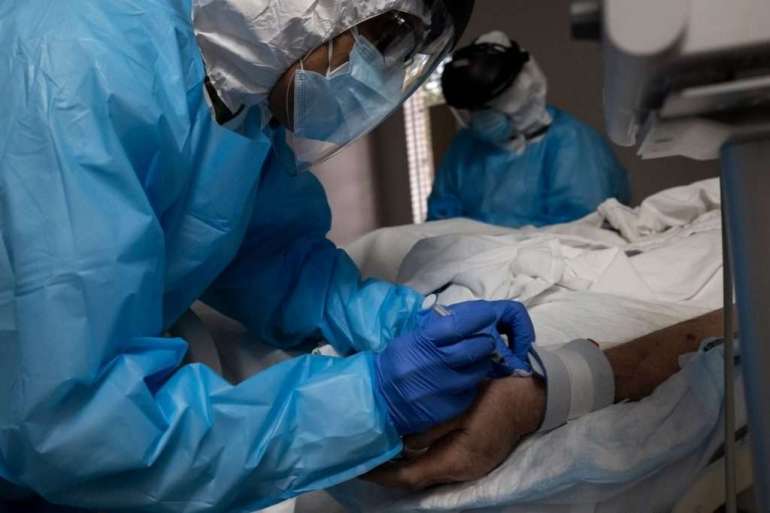 The University of Utah Health System, one of the largest hospitals in the state, reported its ICU is 95 percent filled, and health systems in other parts of the country have been forced to relocate patients because of bed and staffing shortages.

Herbert said the National Guard is on standby to build a field hospital in a convention center outside Salt Lake City, and on Tuesday he ordered masks be worn at all outdoor events.

The pandemic is spawning new infections at a rate not seen since the end of July. Hot spots began to cluster in parts of Utah, Indiana, Wisconsin, Oklahoma, Wyoming, Missouri, Mississippi and North Dakota as the nationwide average number of daily new cases surged over the past month.

In Indiana, the state is facing “critical ICU bed shortages along with personnel shortages” according to Chief Medical Officer Lindsay Weaver, only three weeks after Republican Gov. Eric Holcomb removed most Covid-related restrictions. Officials have put out a call for volunteers to help fill staffing shortages in hard-hit facilities near the Michigan and Kentucky borders.

Indiana has fewer than one-third of its ICU beds available, according to its health department, and there are more than 1,300 patients in the hospital, the most since May and up 67 percent in three weeks.

“This is especially concerning, because we have not begun to see the typical increase in ICU bed usage from influenza,” Weaver said.

Colder weather pushing more people to gather indoors appears to be driving the latest surge more than school reopenings, according to public health experts. Other areas could soon face similar dilemmas, with U.S. hospitalizations at their highest point since the end of August, according to the COVID Tracking Project.

And the phenomenon isn’t confined to the U.S.: The single-day jump in cases worldwide surpassed 350,000 for the first time on Oct. 9.

Wisconsin, where President Donald Trump plans to hold a rally on Saturday, opened a field hospital on its state fairgrounds in West Allis on Wednesday after officials said the health care system is in crisis.

“Many of our ICUs are strained,” said Julie Willems Van Dijk, a deputy secretary with the state’s health department. “Every region of our state has one or more hospitals reporting current and imminent staff shortages.”

The situation appears similarly dire in parts of Texas, Missouri and Oklahoma.

The area around El Paso, Texas, a city of nearly 700,000, has 10 remaining ICU beds, according to the state health department. On Monday, Republican Gov. Greg Abbott announced he was sending 75 health workers, including nurses and respiratory therapists, to help respond.

Meanwhile, two out of three major hospitals in Albuquerque, N.M., are at, or exceeding, capacity. Democratic Gov. Michelle Lujan Grisham on Thursday announced that restaurants and bars must close at 10 p.m. and gatherings of more than five would be prohibited.

“This is the most serious emergency New Mexico has ever faced,” she said.