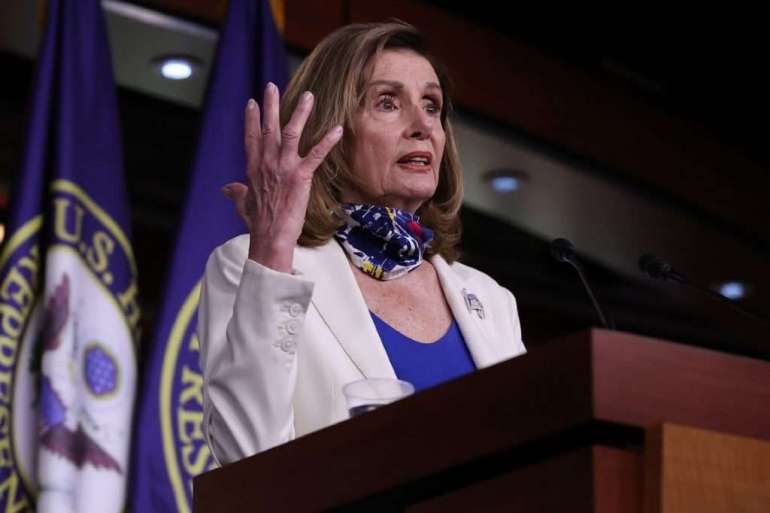 “Are we going with it, or not? And what is the language?” Pelosi said on ABC’s “This Week with George Stephanopoulos.” Asked about the timeframe later on Sunday, Pelosi’s office clarified that an agreement would need to be clinched by Tuesday night. If not, a bill would need to be pushed until after the election.

Pelosi and Mnuchin have been negotiating on and off since August about the size and scope of Congress’ next stimulus package, with much of the U.S. economy still in tatters as the pandemic rages on. Washington has already approved more than $3 trillion in aid, but it’s been six months since any new cash has gone out the door.

Those bipartisan talks have intensified in the last few weeks, though many lawmakers and aides say they’ve grown skeptical that an accord can be reached — let alone passed through Congress — in the final days before the election.

Pelosi also reiterated to her members Sunday afternoon that she believes a deal is within reach, even as key issues remain.

“I am optimistic that we can reach agreement before the election,“ Pelosi wrote in a letter to update her members on the talks Saturday afternoon. Democrats are “fully prepared to move forward once we reach agreement,“ she added.

The situation has been made even more complicated by President Donald Trump himself, who called off the talks during his own battle with Covid-19 — only to backtrack a day later, and then call for an even bigger deal.

Pelosi said Sunday that she and Trump administration officials are still “seeking clarity” on the GOP’s specific offer on a national testing and contract tracing plan, which remains one of the key areas of disagreement.

“We’re seeking clarity, because … with all due respect to some of the people in the president’s administration — they’re not legislators,” she said, noting the administration had made small adjustments in language that were actually significant.

“They changed ‘shall’ to ‘may,’ ‘requirements’ to ‘recommendations,’ a ‘plan’ to a ‘strategy,’ not a strategic plan. They took out 55 percent of the language that we had there for testing and tracing,” Pelosi said.

Pelosi and Mnuchin spoke for more than an hour Saturday night, where Pelosi received “some encouraging news on testing” but remained not in agreement in other areas, according to her spokesman Drew Hammill.

“There remains an array of additional differences as we go provision by provision that must be addressed in a comprehensive manner in the next 48 hours,” Hammill said Saturday night.

Pelosi elaborated on the GOP‘s latest proposal in her letter to House Democrats on Sunday, describing the changes to the testing plan as “unacceptable.“

Other differences, Pelosi said, include funding for state and local governments, the child tax credit, child care programs and the Trump administration‘s attempts to “undermine“ the census. All of the issues were discussed on the call Saturday evening.

Even if a deal on coronavirus relief between Pelosi and the White House is reached, Senate Majority Leader Mitch McConnell would need to bring it to the Senate floor and get Senate Republicans on board with the package. The matter could also be complicated by Mnuchin’s focus abroad, leading an Israeli-American delegation to Bahrain and the United Arab Emirates this weekend.

McConnell did say Saturday that he would put a deal on the floor if it ever came together: “If Speaker Pelosi ever lets the House reach a bipartisan agreement with the Administration, the Senate would of course consider it.”

But the Senate GOP has been perennially skeptical of any funding agreement over $1 trillion, let alone a deal closer to $2 trillion as Pelosi and Mnuchin have been discussing.

Under pressure to pass some kind of relief bill before the election, McConnell has instead teed up Senate votes next week on a much narrower proposal than what Democrats and Mnuchin have floated.

“Speaker Pelosi keeps saying she feels ‘nothing’ is better than ‘something’ and clinging to far-left demands that are designed to kill any hope of a deal,” McConnell said Saturday.

Senate Democrats have not yet said whether they will block the measure, saying they don‘t know the specifics of the proposal.

“We don‘t know what the substance is, we don‘t know the procedure he‘s proposing, so we‘re not going to comment until we get more,“ Senate Minority Leader Chuck Schumer (D-N.Y.) told reporters Sunday, though he was critical of the GOP maneuver broadly.

Mnuchin — who has been largely optimistic throughout the talks — acknowledged earlier this week that the odds were diminishing to reach a deal before the election. He told the Milken Institute Global Conference that “getting something done before the election and executing on that will be difficult.”

Heather Caygle contributed to this article.