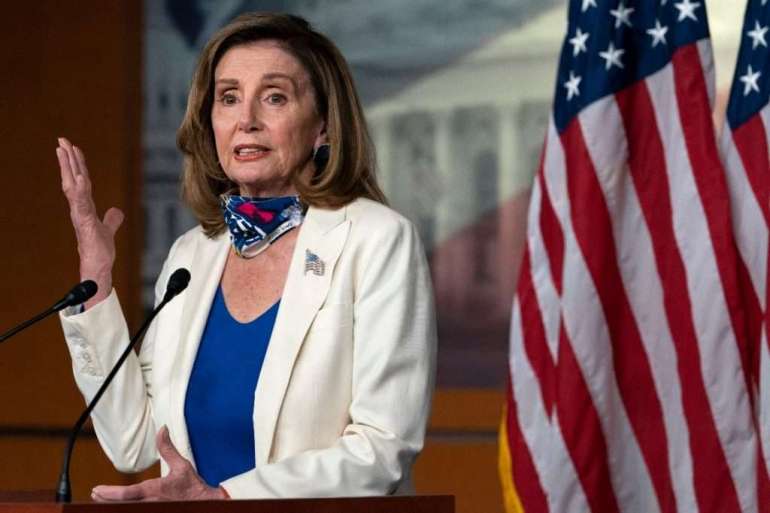 Pelosi later told reporters that she hoped to get something done by the end of the week: “That’s the plan. That’s what I would hope.”

But the California Democrat’s biggest obstacle may be across the Capitol — with Senate Majority Leader Mitch McConnell (R-Ky.) privately urging the White House not to settle with Pelosi before the election.

Most Republicans and many Democrats still say it is unlikely a relief package can be shepherded through Congress in the coming weeks — because of both resistance in the GOP-controlled Senate as well as lingering differences between Pelosi and Mnuchin.

“You never know what’s going to happen around here at the last minute, but it’s getting to be toward the last minute and the clock keeps ticking away,” Senate Appropriations Chair Richard Shelby (R-Ala.) told reporters Tuesday. “I’m not optimistic about doing anything.”

But Pelosi had sounded hopeful ahead of her call with Mnuchin, and she seemed to downplay the “48-hour” deadline she announced over the weekend Pelosi said that timeline was needed to finalize a bill before the election but that she and Mnuchin could keep negotiating even if an agreement didn’t materialize by the end of the day Tuesday.

“We’re on a path,” Pelosi told Bloomberg TV before the most recent negotiating session. “As the secretary and I say to each other, ‘If we didn’t believe we could get this done, why would we even be talking?’”

“We could still continue the negotiation. It might not be finished by Election Day,” Pelosi added.

Pelosi said she and Mnuchin have made significant progress in some key areas, including on provisions outlining a national coronavirus testing and tracing plan — a key element for Democrats that appeared to be derailed over the weekend when the two sides couldn’t agree on legislative text. Pelosi described the GOP stance as “a change from over the weekend.”

Pelosi’s spokesman said Tuesday that committee chairs have been tasked with resolving differences “about funding levels and language” before the two negotiators speak again on Wednesday. The chairs had already been tapped to reach out to the top Republicans on their panels to begin hammering out some of the finer details of a broader deal.

But key hurdles remain, including disputes over one of Democrats’ top priorities — funding for state and local governments — and liability protections for businesses and schools that Republicans have long demanded. There are also smaller outstanding disagreements on language related to vaccines, health care worker protections and the child tax credit.

“The two bookends of our differences right now… one is state and local and the other is liability,” Pelosi said on Bloomberg TV.

Pelosi and Mnuchin are more broadly aligned on the need to revive expanded unemployment benefits, send aid to small businesses through the Paycheck Protection Program and deliver stimulus checks to individuals, though there is still some disagreement on the assistance levels for those initiatives.

Much of Capitol Hill remains skeptical that Pelosi and Mnuchin can reach an agreement on anything that will make it to President Donald Trump’s desk, especially without the support of McConnell and other key Republicans.

McConnell has largely steered clear of the stimulus talks and is focused on confirming Amy Coney Barrett to the Supreme Court before the election. Most GOP senators are also opposed to spending anything close to the $2 trillion being discussed by Pelosi and Mnuchin; they’re instead backing a narrower, approximately $500 billion proposal that is set to get a vote Wednesday. The Senate also held a procedural vote on Tuesday to put pressure on Democrats over a lapse in Paycheck Protection Program funding, though most Democrats dismissed it as a political stunt.

On Tuesday McConnell appeared to publicly soften his stance on whether to allow any Pelosi-Mnuchin deal to come to the Senate floor for a vote.

In a statement over the weekend, McConnell only agreed to “consider” a Pelosi-Mnuchin agreement. But on Tuesday, the Kentucky Republican said he would allow the Senate to vote on it, provided that Trump had agreed to sign it first.

“What I’m telling you is that if such a deal were to clear the House, obviously with the presidential signature promised, we would put it on the floor of the Senate and let the Senate consider it,” McConnell told reporters following a Republican policy lunch.

McConnell, however, didn’t say when any such measure would come up for a vote, and it’s increasingly unlikely that such an agreement could see action before Election Day.

And privately, McConnell told Republican members at lunch Tuesday that he had warned the White House against reaching a large stimulus deal before the election; doing so could divide the GOP conference and delay Barrett’s confirmation, according to two people familiar with his remarks. McConnell’s private remarks were first reported by the Washington Post.

There isn’t unanimity among Democrats either — several of whom are uneasy with the negotiations over liability provisions. Rep. Diana DeGette (D-Colo.) told Pelosi on a private caucus call Monday that she didn’t see how any Democrat could vote for a deal with the current liability provisions.

Mnuchin, meanwhile, has argued that Senate Republicans would get behind an accord if Trump himself backed the deal. But that prospect is still uncertain in a GOP-controlled Senate on edge ahead of an election where the majority is up for grabs.

Trump, too, said on “Fox and Friends” on Tuesday that McConnell “will be on board if something comes.”

Trump then went on to call for a stimulus package that’s even pricier than the $2.2 trillion Democrats want — though the GOP has shown zero interest in spending more than Democrats after months of talks.

“I want to do it even bigger than the Democrats. And not every Republican agrees with me, but they will,” Trump claimed, adding that Pelosi does not want to reach a deal, despite weeks of lengthy talks with Mnuchin.

“Here’s the problem, she doesn’t want to do anything until after the election because she thinks that helps her,” Trump said. “I actually think it helps us, because everyone knows that she’s the one that’s breaking up the deal. Now, they are talking. Let’s see what happens.”

Pelosi, meanwhile, has continued to insist publicly and privately that a massive economic rescue package could be done before the election, with her caucus eager to see money go out the door as quickly as possible. The bill would have to be written by the end of this week and move through Congress next week, Pelosi said Tuesday.

In a private call with Democrats on Monday afternoon, Pelosi said she’s determined to reach a deal and push it through the House in part to help clear the decks ahead of a potential Joe Biden presidency.

But that effort seemed futile at best on Tuesday, as multiple Democrats reported an icy reception from House Republicans. And a bipartisan phone call between House Appropriations Committee staffers on Monday yielded little progress.