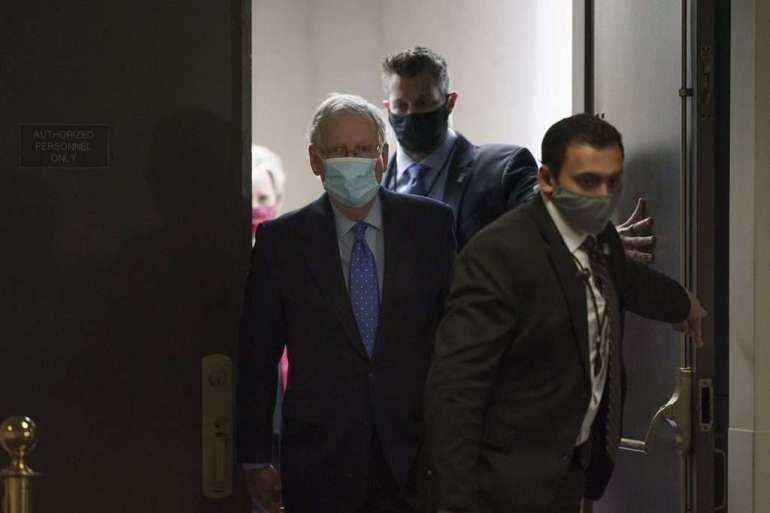 “Every new escalation, every new step, every new shattered precedent, every one of them, was initiated over there,” McConnell said.

Senate Minority Leader Chuck Schumer shot back, saying McConnell is using “a convoluted version of history … to justify steering the Senate towards one of the lowest moments in its long history.”

Senate Democrats have accused Republicans of hypocrisy for moving to confirm Barrett eight days before the election, after blocking former President Barack Obama’s Supreme Court nominee Merrick Garland in 2016. But Republicans argue that history is on their side because unlike in 2016, the White House and the Senate are now controlled by the same party.

In an act of protest, Senate Democrats forced the Senate Friday to go into a rare closed door session, which lasted about 20 minutes and ended after a party-line vote. The Senate has not held a closed-door session in more than a decade. Senate Democrats made the move Friday in an effort to stall setting up a key procedural vote.

Senators emerged from the session saying that nothing notable happened. Sen. Marco Rubio (R-Fla.) described the move as “a super-spreader event” since the lawmakers remained in the chamber and in close quarters.

Democrats also boycotted a Senate Judiciary Committee vote on Thursday to advance Barrett’s nomination to the floor and have forced a series of procedural votes throughout the week. But they do not have the procedural tools to stop the nomination altogether from going forward.

Sens. Susan Collins (R-Maine) and Lisa Murkowski (R-Alaska) voted Friday against a procedural step to move to Barrett’s confirmation. Both senators have said they oppose Barrett’s nomination to the Supreme Court before the election, but it’s unclear if Murkowski will vote against her final confirmation.

If confirmed, Barrett would replace the late Justice Ruth Bader Ginsburg, who passed away Sept. 18.

Burgess Everett and Andrew Desiderio contributed to this report.