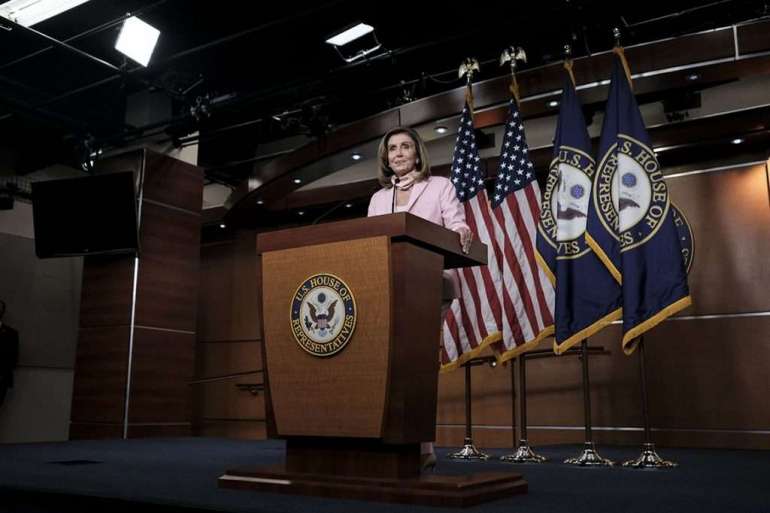 “My experience with the president is that he has, really, almost a historic lack of knowledge about the issues and the legislative process,” Pelosi told POLITICO in an interview on Friday. “He has no relationship, no affiliation with fact, data, truth or evidence. And he has a very small view of the future.”

Pelosi will no longer be the party’s leader if Biden wins the White House on Nov. 3, but her influence may only grow. If Democrats also win the Senate, the incoming president is expected to rely heavily on the Democratic agenda passed by the House that’s been blocked by Trump and Mitch McConnell during the last two years. On everything from health care to climate change to money in politics, the markers laid down by House Democrats may prove every bit as important as the policy goals Biden laid out during the campaign.

Yet Pelosi also faces questions about her own future. In order to win over a handful of skittish Democrats following the party’s landslide victory in the 2018 midterms, Pelosi committed to serving only two more terms as speaker. That would make the next Congress her last after 20 years in power, and this upcoming election her final appearance on the ballot, unless she goes back on her commitment.

“No, I don’t,” Pelosi said after a long pause, when asked if she wants to talk about her future beyond the next Congress or how long she wants to remain as speaker.

“Right now, it’s serving past the next couple of days,” added Pelosi, the first woman speaker. “Let’s see what happens in the election. I feel quite certain today, as I said earlier, that we’d win it all. But it isn’t today.”

During a CNN interview on Sunday, the California Democrat again affirmed her intentions to stay on as speaker: “Yes, I am. But let me also say we have to win the Senate.”

Pelosi, 80, is expected to easily secure another term as speaker in January — very likely without even a challenge, according to interviews with a dozen House Democrats.

“I’ve been around a while, I don’t think anybody in our caucus, even in a drunken stupor, is thinking they could run against Nancy Pelosi and win the speakership,” said Rep. Emanuel Cleaver (D-Mo.).

“Any departure by Nancy Pelosi will be because she wants to depart,” he added. “She is riding in that parade at the front. And the rest of the parade is following joyfully.”

In the last six months alone, Pelosi has almost single-handedly negotiated more than $3 trillion in pandemic aid bills on behalf of House Democrats, while many of her members aren’t even in Washington. Those bills have all passed through the chamber without hearings, and some even without roll call votes.

Lately, Pelosi and Treasury Secretary Steven Mnuchin have spent months trying to hammer out another $1 trillion-dollar-plus stimulus package, with everyone else in Washington on the outside looking in. It’s an extraordinary position for any party leader and harkens back to Pelosi’s work with the Bush administration to rescue financial markets in 2008.

Pelosi has operated as the Democrats’ lead spokesperson as well. Since late March, she has done nearly 160 TV interviews, plus another 20 appearances on Sunday talk shows. This doesn’t include print interviews, or the stakeouts she and Senate Minority Leader Chuck Schumer held.

Pelosi also continues to be a fundraising juggernaut, having raised more money than any non-presidential candidate ever. Pelosi raised more than $193 million for the House Democratic campaign arm alone this cycle. Since 2002, Pelosi has raked in a stunning $961 million for Democrats, according to her office.

“I would agree with you that she is most certainly the strongest [speaker] in modern times, and could very well be ever,” said Majority Whip Jim Clyburn (D-S.C.). “I would say that I do think she’s the most consequential speaker ever.”

Pelosi’s rise to the speakership came at a time when the role of the office changed and became much more visible nationally. Sam Rayburn, the legendary Texas Democrat, was speaker for far longer, but he worked more in the background than Pelosi does. Tip O’Neill, the iconic Massachusetts Democrat, clashed furiously with President Ronald Reagan, although he also had to contend with powerful committee chairs. In the Pelosi era — thanks in part to changes instituted under Newt Gingrich (R-Ga.) — there is no other power base within the body.

As for how long Pelosi should serve, Clyburn — the No. 3 Democrat and a fellow octogenarian — believes the California Democrat can stay put as long as she wants. Pelosi, Clyburn and the 81-year-old House Majority Leader Steny Hoyer have held the top three spots in the Democratic Caucus for the last 14 years, to some frustration among the next generation of ambitious lawmakers.

“I hope it’s not her last [term],” Clyburn said. “But if it were up to me, I think Biden is going to need her. … My preference is keep the team together.”

For Republicans, Pelosi is the epitome of a powerful leader run amok. House Minority Leader Kevin McCarthy and other GOP lawmakers sued after Pelosi instituted proxy voting on the House floor earlier this year in response to the pandemic, calling it a “brazen violation of the Constitution,” although a federal judge later threw the case out.

“Time and again during this crisis, the Speaker has overplayed her hand and wasted precious time to help Americans,” McCarthy said in a statement. “This failure isn’t a new paradigm. Her career is marked by absolutism. If the media ever questions it, she lashes out. If she senses a threat from her own members, she keeps them home. The Speaker is consumed by internal power plays at the expense of getting things done.”

Even with all of her success, some Democrats have quietly begun considering a post-Pelosi era. It’s a topic that no lawmaker will discuss publicly for fear of backlash from the speaker — the oldest person to hold the office — though such discussions continue quietly inside a caucus where roughly 80 percent of Democrats have only served under Pelosi’s leadership.

Nearly a dozen Democrats are clamoring for one of their caucus’ few open leadership posts in January, a perch that many hope could position them for bigger roles in case of a potential exodus by the troika of Pelosi, Hoyer and Clyburn in the next cycle.

“I think people are starting to think what’s the team going to look like two or four years from now,” said Rep. David Cicilline (D-R.I.), who is running to be assistant speaker, the No. 4 spot in leadership.

“I think people are beginning to think who will be the next generation of leaders in the Democratic Caucus,” he said. “I think that’s kind of natural.”

There are still Pelosi critics, including roughly a dozen Democrats who opposed her second tour as speaker in 2018. But it’s not even clear how many would vote against her now.

“In the last go around, there was some opposition,” said Rep. Anna Eshoo (D-Calif.), a longtime Pelosi friend. “There was a lot of talking, but there wasn’t any candidate.”

Eshoo said it’s possible that some of the incoming Democrats from swing districts may stage some sort of opposition to Pelosi next Congress. But Eshoo said it would not weaken her ability to govern.

“Every single one of them will have received her considerable support, monetarily and otherwise,” Eshoo said. “She always says, ‘Just win.’”

“Our confidence in the speaker is high,” added Rep. Katherine Clark (D-Mass.), another member of Pelosi’s leadership team seeking a higher post next year.

While Pelosi is firmly ensconced in the speaker’s chair, there is speculation about possible successors whenever she does leave. The list includes Rep. Hakeem Jeffries (N.Y.), the Democratic Caucus chair; Intelligence Committee Chair Adam Schiff (D-Calif.), a major player in Trump’s impeachment; and Rep. Karen Bass (D-Calif.), whose national profile rose during the police reform debate, among others.

Some long-serving Democrats say Pelosi’s second run as speaker has been markedly different than her first, when Pelosi and former President Barack Obama muscled through massive legislation — from Obamacare to a cap-and-trade climate bill — that some believe spurred the tea party backlash and cost them the House in 2010.

Long-time moderate Rep. Henry Cuellar (D-Texas) recalls delivering a message to a Pelosi staffer shortly after Democrats recaptured the House in 2006. “We gotta be careful that we don’t overreach,” he remembers saying. Four years later, Republicans won back the chamber.

Cuellar thinks that lesson will carry over to a potential Biden administration.

“[Pelosi] is going to try to get as much done as she can, but I think she understands the factor of overreach. I think she learned that in her first term.”

Pelosi argues it wasn’t her agenda that cost Democrats in the 2010 midterms, noting that her party suffered much the same way Republicans did in 2006 and 2018 under a president of the same party.

“That is just how it has gone. Doesn’t mean it will continue to go that way,” Pelosi said, dismissing concerns that an ambitious Democratic program could, once again, fuel a GOP wave that costs them the House in two years.

Pelosi added that she is already looking to cushion any potential blowback in the midterms by bolstering Democratic ranks now, though she wouldn’t divulge how many seats she expects to pick up next week.

“I’m already getting ready for that election,” Pelosi said of the 2022 midterms, just days before the 2020 race. “My goal this year was to win two elections in one day.”