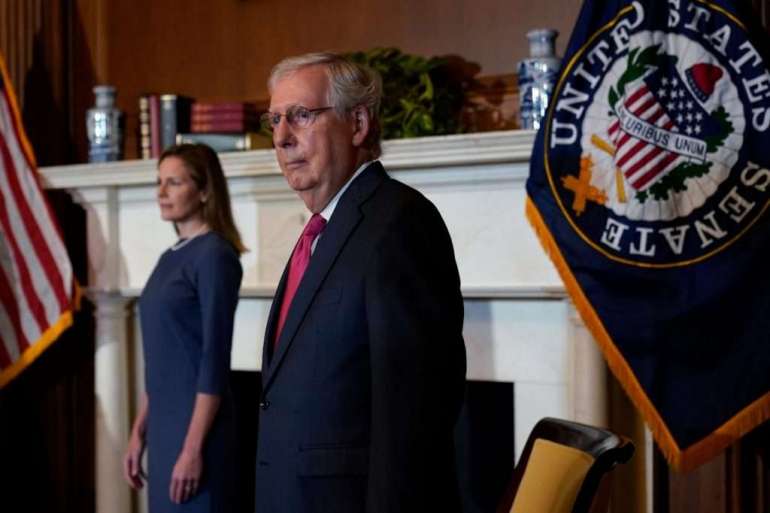 Now, Trump’s sinking approval ratings may bring down McConnell’s Senate majority. The Kentucky Republican himself called it a “50-50” proposition whether the GOP would hang on at this point, though forecasters have begun giving the edge to Democrats.

But McConnell argued Barrett’s confirmation would deliver for Republicans — in the current battle for the Senate and over the long run. Even more, he argued, than a high-profile piece of legislation.

“Permanency depends on the next election. So that’s the way legislation goes,” McConnell said in a 15-minute interview Tuesday. “But in judicial appointments you can have a longer-lasting positive impact.”

McConnell has dismissed Democratic complaints that the vacancy left by the late Justice Ruth Bader Ginsburg should’ve been left open until next year, or threats of retaliation through “court packing” if Democrats win the White House and Senate on Nov. 3. He said on Monday night that “every high school student in America learns about Franklin Roosevelt’s unprincipled assault on judicial independence,” and warned Democrats not to repeat it.

But he insisted Tuesday that the hyperpartisanship surrounding Supreme Court nominations boosted Senate Republicans during the past two election cycles and is doing so again this year as McConnell looks to defend his 53-seat majority.

McConnell also referred to bipartisan negotiations on the latest Covid relief bill in the past tense, declined to discuss whether he could work with a potential President Joe Biden and refused for the millionth time to say whether Trump should change his conduct, in this case if the president pulls off an upset win for a second term.

The deliberative McConnell and erratic Trump could hardly be more different in personal style or temperament. But the president and the Republican leader worked extraordinarily closely to first nominate Barrett and then confirm her. The night Ginsburg died, the two connected by telephone and McConnell told Trump to have a nominee he could move quickly, according to White House officials and a GOP aide.

“This is what Mitch was made for: filling the Supreme Court seats,” Trump said on the call. McConnell was more circumspect in his response: “This will be the hardest fight of my life. We have to play this perfectly.”

In the end, they cemented a long-term conservative Supreme Court majority eight days before the election, while only losing a single Republican vote. From Trump’s announcement of Barrett to her Senate approval, the entire process took just one month, a stunningly fast turnaround.

But as GOP celebrations over Barrett continue, McConnell is looking toward his next challenge. He plans to run for Republican leader again in a few weeks — either in the majority or minority — provided he wins reelection to a sixth term next week.

The 78-year-old McConnell dismissed questions about his health. He said “of course” he’ll serve the full six years if reelected.

But McConnell, the longest-serving senator in Kentucky history and longest-serving GOP leader, didn’t want to engage on how he will be viewed by history or how he would rate himself among the long line of Senate leaders.

“I think my record speaks for itself,” McConnell said. “The judicial part in particular is of great consequence, and I think you all are capable of comparing that to previous majority leaders.”

Democrats know how they feel about McConnell, and it isn’t good. The party is furious that McConnell blocked Merrick Garland’s nomination for the high court in 2016, while fast-tracking Barrett through now, even as tens of millions of Americans have already voted.

“He’s destroyed the orderly process of selecting judicial nominees,” Minority Whip Dick Durbin (D-Ill.), a senior member of the Judiciary Committee, said of McConnell. “The worst part is he’s shaken the trust that members of the Senate had for one another and the mutual respect that makes this place work.”

“I might have voted for Amy Coney Barrett as far as circuit judge, but I would’ve liked to have a little more time on this for a deep dive,” said Sen. Joe Manchin (W.Va.), the most conservative Democrat. “Look, there’s not a judicial crisis. There’s still five conservatives to three progressives. What are they afraid of that they need insurance? The election and the Affordable Care Act.”

Some Senate Democrats and party activists are openly calling for expanding the Supreme Court if they control Washington in order to dilute the 6-3 conservative majority that McConnell has now helped enshrine. Liberals fear the coming Supreme Court will strike down an ambitious Biden agenda, just as the high court targeted major pieces of Roosevelt’s New Deal.

McConnell, however, uses those threats to animate his party’s defense of the Senate majority. Republicans have followed his lead, using the left’s talk of changes to the court as their case for being a firewall against a Biden presidency.

It’s just the latest example of the GOP rank and file embracing McConnell’s approach to politics. McConnell’s tight lips on Trump’s tweets and other controversies stand in stark contrast to former Speaker Paul Ryan, whose tiffs with Trump helped lead to an early end to the Wisconsin Republican’s career. These days, all but the chattiest Republicans ignore questions about Trump’s conduct.

In the Trump era, McConnell has guided the GOP through multiple government shutdowns, a presidential impeachment, the coronavirus pandemic and the ensuing U.S. economic slowdown. And while Trump may cost Senate Republicans their six-year-old majority, McConnell’s colleagues aren’t blaming his handling of the president for it. They don’t complain about his sometimes compulsive focus on approving judicial nominees no matter what else was happening, either.

“He set a course to confirm justices and judges and he will have done it,” said Sen. Lamar Alexander (R-Tenn.), a close McConnell ally who is retiring this year. “And history will judge whether it was the right thing to do. I think it was. And it will surely be the first thing in the history book about him.”

“Judges are the Super Bowl,” added Sen. Shelley Moore Capito (R-W.Va.). “And he’s been winning. So I think it will reflect well on him as someone who can persuade and use power effectively for something that many of us believe in.”

If McConnell can somehow prop up his majority this cycle, it will only strengthen his hand in the GOP. But McConnell acknowledges “the election could go either way” and he could end up as minority leader, where he started nearly 14 years ago.

Under President Barack Obama, McConnell deployed a hard-line strategy of opposition, aimed at casting Democrats as feckless and unable to govern. Would he deploy those same tactics if Biden is president in January? Like usual, McConnell’s not giving anything away.

“That’s a good thing to discuss the day after the election,” he said.