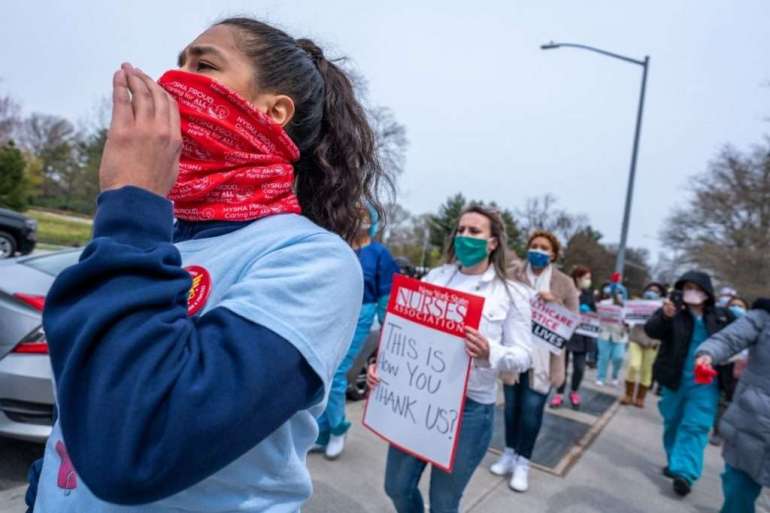 It’s also exacerbated fears that the union is losing its cachet in Albany at a time when nurses are being praised as heroes after facing the onslaught of the coronavirus in New York, an early national epicenter of Covid-19. The union lost its pandemic push to improve hospital staffing ratios after the state said in August the request was unattainable. And the group spent close to $200,000 on three failed lawsuits — against two hospitals and the state — amid the pandemic that were dismissed for legal flaws.

“They’re eating their own,” a Cuomo administration official told POLITICO, requesting anonymity to speak freely. “They went from being major players to bit players because their leadership does one thing and their membership does the other.”

In an interview with POLITICO, union President Judy Sheridan-Gonzalez said the union was more united than ever, and the complaints within the group were the natural byproduct of an evolving mission.

“Our organization right now is very different than it was a year ago,” she said. “We’re beloved.”

The rift has been percolating for at least two years, but it came to the fore in December, when former Executive Director Jill Furillo was forced out of her post after securing safe-staffing ratios at the city’s public hospital system — a core agenda item for nurses. Furillo had won national recognition for her work in gaining favorable contracts and helped steer California’s Legislature to establish the nation’s first patient-to-nurse staffing ratios. But members who spoke to POLITICO said she frequently clashed with Sheridan-Gonzalez over the union’s approach to lawmakers.

Sheridan-Gonzalez has overseen a leftward shift in the union as the New York City branch of the Democratic Socialists of America has attempted to build a stronghold there. State officials that work closely with the union as well as nine members, staffers and union leaders who spoke to POLITICO say the new approach is diluting NYSNA’s ability to advocate for its members.

“It’s been a year from hell, as a staffer,” one person said.

Sheridan-Gonzalez, who worked at Montefiore Medical Center for about 30 years as a registered nurse, is credited with overhauling NYSNA in 2011 to begin politically aligning it with left-wing policies like minimum nurse-patient ratios and a call for universal health care. She then took over as president in 2013, an elected role. About 2,500 to 4,000 NYSNA members vote in officer elections in any given year, according to the most recent records and interviews with members.

With the growing popularity of DSA’s agenda in New York City, a dozen individuals said Sheridan-Gonzalez, who had earned a reputation as a reformer against cronyism and corruption, was pushing that agenda within the union.

Individuals interviewed by POLITICO who have worked with Sheridan-Gonzalez said she is attempting to flip union leadership posts to DSA-affiliated members, according to several people familiar with the situation.

The ideological push has meant a more militant approach toward politicians the union doesn’t consider progressive, including Gov. Andrew Cuomo, despite their reliance on Albany support for passing laws that will benefit members.

“[The union’s] job is to work with all lawmakers on both sides of the aisle to deliver on the agenda for the members. NYSNA has a really good way of being able to do that work,” said one NYSNA staffer. “The DSA does not deal with their politics that way.”

“Safe staffing belongs to NYSNA,” she said. “It doesn’t belong to any other organization. NYSNA, safe staffing is like one word.”

State officials say the approach has been short-sighted and has been worsened by growing internal dysfunction which makes it harder for the union to grow its membership and secure better working conditions, especially amid the pandemic.

Two high-profile leaders within the union also left their roles around the time Furillo exited, prompting concerns that the union had lost some influence in Albany.

“The political team is one of the only places where women of color are in charge,” a NYSNA staffer said, referring to Martin and Jarrett who are Black. “Leadership remains all white and getting whiter, there seems to be this mass exodus of women of color.”

Under Sheridan-Gonzalez and Kane, “the political team has no direction and clear leadership,” she added.

“Our policy and platform are pretty clear,” Sheridan-Gonzalez said. “It hasn’t changed that much over the years.”

That policy and platform is aligned with the DSA’s politics, but the crossover within the union has alarmed some members and staffers.

The group, which since the rise of Ocasio-Cortez has increasingly dominated electoral politics in New York City, recognized that it needed to “make a concerted effort to expand organizing efforts in sectors dominated by communities not currently represented in DSA,” according to a DSA memo, first reported by POLITICO and issued in 2018.

“New York City nurses are predominantly women of color, a minority in NYC-DSA,” according to a blurb about NYSNA in the memo, co-authored by Marsha Niemeijer, a NYSNA staffer and DSA member. “DSA has described itself as committed to maintaining an active and diverse membership but is primarily composed of middle-class white people.”

The exits, coupled with culture clashes and a formal complaint lodged with NYSNA and the U.S. Department of Labor, prompted an anonymous group of individuals within the union to air their grievances with NYSNA on a blog called “NYSNA I See You.”

Fifteen NYSNA members, including two board members, signed off on a complaint to federal regulators that accused Sheridan-Gonzalez and Kane of “receiving improper financial benefits in the forms of ‘salaries’, stipends, or other remuneration, which they have arranged for themselves, with zero oversight or accountability.”

The Office of Labor-Management Standards at the U.S. Department of Labor declined to comment on the complaint through a spokesperson. Sheridan-Gonzalez denied the accusations and said if the complaint had merit, OLMS would have notified her that it was conducting an investigation, which it has not.

An executive committee within NYSNA — which includes Sheridan-Gonzalez, Kane, First Vice President Anthony Ciampa, Second Vice President Karine Raymond and Secretary Tracey Kavanagh — reviewed the allegations and dismissed them as being “untimely” and showing “insufficient” evidence, according to a written response to the 8-page complaint.

Valerie Burgos-Kneeland, a nurse who is vice president of the bargaining unit at Mount Sinai, said an investigation carried out by the accused was not likely to be very rigorous.

“Self-investigation is not unbiased or thorough and our union members are entitled and deserving of an independent investigation,” she wrote in an email about NYSNA’s dismissal of the complaint, a copy which was shared publicly on the blog.

“I do not see how either Patricia Kane or Judy Sheridan-Gonzalez ever expect themselves to be truly cleared in the eyes of members without an independent investigation,” she continued. “There will always be a dark cloud over their heads and doubts in member’s minds. That is not leadership.”

NYSNA has settled with several other staffers who threatened lawsuits, according to three people familiar with the settlements.

It is also facing pending lawsuits over accusations of racial discrimination and a whistleblower suit that alleged Kane — who ran for the state Assembly representing Staten Island’s North Shore in 2018 — had NYSNA hire her campaign manager to cover unmet compensation, according to two staffers. They requested anonymity to avoid retaliation.

“I’m not aware of any specific lawsuits that have been filed,” Sheridan-Gonzalez said. “Maybe they want a golden parachute to leave.”

When pressed about the whistleblower suit, Sheridan-Gonzalez said “some things are confidential to the organization” and said it was determined to be unjustified.

Terry Alaimo — the Mount Sinai System area director who was fired from her union position in May after sending an email to NYSNA leadership about the nurse who took the infamous “trash bag over PPE” photo at Mount Sinai was published in the New York Post — said she’s planning to sue NYSNA, according to the blog.

“Under advice of counsel at this point, I can’t discuss it,” Alaimo said.

NYSNA also spent more than $200,000 to sue the state health department, Westchester Medical Center and Montefiore Medical Center — where Sheridan-Gonzalez organized a no-vote on ratifying the nurses’ contract in a thwarted attempt to lead a strike in 2019 — over alleged inadequate levels of personal protective equipment and policies that harmed frontline workers.

All three of the suits have been thrown out by state and federal judges, who argued that they were beyond judicial review and did not have jurisdiction to implement the workplace protections NYSNA sought.

“We won,” Sheridan-Gonzalez said, noting the lawsuits were a tactic “to get things done” and prompted hospitals and the state health department to meet their demands.

Yet members said they saw it as a publicity stunt and pointed to the union’s growing inefficacy under Sheridan-Gonzalez and Kane, the latter who several people described as lacking the muscle that Furillo had. Sheridan-Gonzalez defended Kane as a “major, major brain in the transformation of NYSNA into a socially responsible organization,” and said that “under her leadership this union has thrived and grown.”

Under Kane’s leadership, NYSNA was given a seat on Covid-19 task forces by the governor and Mayor Bill de Blasio; helped shepherd NY A375, a whistleblower bill introduced by NYSNA member Assemblymember Karines Reyes; and became more visible to legislators, said Sheridan-Gonzalez when asked for examples.

Others, however, said NYSNA has not been able to achieve larger legislative goals compared to other unions that represent health care workers like 1199 SEIU and DC37. Some legislators said the union has been difficult to work with under Kane’s leadership.

NYSNA’s seeming decline in influence was illustrated most recently by the state health department’s long-awaited “safe staffing” study, which determined that minimum nurse-to-patient ratios at hospitals and nursing homes were not feasible in New York. Nurses have long pushed for better ratios, arguing proper care requires fewer patients per nurse.

The Cuomo administration report, which was released Aug. 14, determined the state would need to hire 70,000 more nurses and other caregivers at an annual cost of $3.7 to $4.7 billion to reach the ratios nurses were looking for — a cost the state deemed prohibitive in a defeat for the nurses.

“The Department of Health’s shoddy report is a slap in the face to frontline nurses who sacrificed so much during this crisis,” Kane said in a statement at the time. “Safe staffing could have saved lives during the COVID pandemic.”

For the 2020 primary, NYSNA members interviewed politicians in a manner described by three individuals as “humiliating” and “hostile.”

“I left there so angry,” said one veteran lawmaker. “I never felt so disrespected in a room in my whole career.”

The NYSNA convention will take place on Oct. 20, where members can vote on bylaw changes and the organization’s structural modifications, and adopt new rules — an occasion some members fear will further entrench the union’s leftward swing.

“NYSNA has built itself into a fairly powerful political organization,” said one former staffer. “It was — I fear it is no longer.”