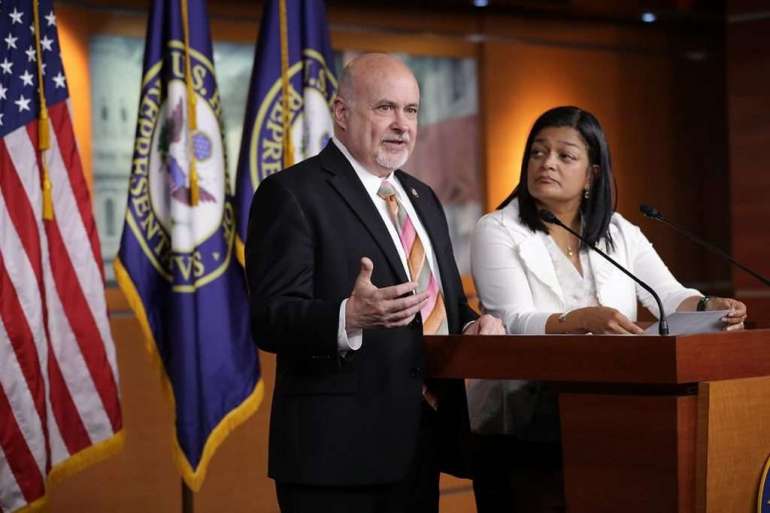 Pocan, Rep. Barbara Lee of California and other progressive lawmakers pressed to slash the military budget by 10 percent this summer as part of annual defense policy legislation. The effort fizzled with just 93 lawmakers supporting the measure.

But securing those cuts the next time around is chief among progressive spending priorities for the coming year. Progressive Caucus co-chair Pramila Jayapal (D-Wash.) said recently that “meaningful budget cuts in Pentagon spending” will be “a top priority” for the group.

Lee and Pocan, who both sit on the House Appropriations Committee, are spearheading a new Defense Spending Reduction Caucus to build “critical mass” among lawmakers to cut defense spending and redirect the money toward domestic priorities, a trade-off that has been amplified by the health and economic crises wrought by the coronavirus pandemic.

The group represents an attempt by lawmakers to formalize the push for defense cuts. Pocan said the caucus will regularly highlight aspects of defense spending that show the need for a leaner military budget — including waste and fraud, cost overruns for weapons, the Pentagon’s expensive effort to overhaul each leg of the nuclear arsenal and the creation of a Space Force as the newest military service.

“You can’t really enhance the quality of life and address economic inequality and poverty and all our domestic needs if we have an excessive defense budget,” Lee said in an interview. “We can have a much more reduced budget, by at least 10 percent, and still maintain a strong national security and take care of our troops.”

In the Senate, a similar proposal offered by Vermont Independent Bernie Sanders to cut defense spending by 10 percent was rejected handily, but won the support of some senior Democratic leaders, including Minority Leader Chuck Schumer of New York and Minority Whip Dick Durbin of Illinois, who is also the top Democrat on the Defense Appropriations subpanel.

If Democrats flip the Senate, Sanders could also claim the Budget Committee gavel and push to constrain defense funding when the panel crafts its own blueprint to guide the annual budget and appropriations process.

The 2022 fiscal year will also be the first in a decade without spending caps imposed by the Budget Control Act, a law enacted in 2011 that placed annual limits on defense and domestic spending to rein in the deficit. Progressives have bemoaned the law, which forced congressional leaders to forge a series of deals to increase domestic and defense spending in tandem.

But even in a unified government, defense cuts of the magnitude progressives want face a tough road. Neither effort in the House or Senate was supported by a majority of the Democratic caucus. And some senior Democrats are downplaying the prospect of major cuts to the military.

Former Vice President Joe Biden said in September he doesn’t anticipate major cuts to defense spending — and even suggested certain parts of the Pentagon budget could increase to account for investments in new technology.

House Armed Services Chair Adam Smith (D-Wash.) this month predicted an intra-party clash over the size of the defense budget if Democrats sweep the elections next week. The Washington state Democrat said he isn’t sold on major cuts to the defense budget, but said he’s open to the possibility of reductions.

“I’m unconvinced that our national security would be what it needs to be if we cut the defense budget by 10 or 20 percent,” Smith said.

Smith said he instead sees a “flatline” budget in the range of $720 billion to $740 billion. A $720 billion national defense topline would be a roughly $20 billion cut from the current year, but he noted it doesn’t come close to the 10 percent cut the House defeated.

He added that he wants Democrats to engage in a spending debate “because if we’re in charge that means we’ve got to pass something,” but warned the proposals must be backed up by strategy.

“There has to be a national security strategy behind those cuts,” Smith said. “It can’t just be, ‘Well, I’d rather spend the money elsewhere. I don’t like the Defense Department. I’m going to cut their budget.’

“You have to explain to me that, OK, are we not going to have as many troops in Asia to deter North Korea from invading South Korea and China from invading Taiwan? Are we going to reduce even further our footprint in Africa and then cede that area more to China and to Russian mercenaries?” he added. “What are the implications there? Is there an argument for that? I want to have that debate and I want to have that discussion.”

President Donald Trump and GOP defense hawks were successful in boosting total national defense spending well above $700 billion, arguing the military needed to be restocked after years of capped budgets.

Despite steep hikes early in Trump’s term, Pentagon leaders have recently warned they envision flat budgets in the coming years, sending the leaders of the military services and other defense agencies scrambling for savings as they carry out a strategy centered on confronting Russia and China. The services are also undertaking expensive plans to modernize nuclear weapons and expand the Navy to more than 500 ships.

The top Democrat on the Senate Armed Services Committee, Jack Reed of Rhode Island, also cast doubt on the prospects for slashing the defense budget.

Reed suggested flat budgets would likely carry over from the Trump administration to a potential Biden administration, forcing the Pentagon and lawmakers to make difficult funding trade-offs on phasing out old weapons, modernizing certain systems and investing in new technology.

“I think President Biden will send a budget up that recognizes, I think, in fact essentially the same reality that President Trump would have to recognize [which] is that the increases of the last several years are not going to be … carried forward, that we’re in more of a steady-state, sort of flat-line budget, and within that budget we’re going to have to make savings,” Reed said at an online summit hosted by the Association of Defense Communities.

“I don’t think a President Biden would ask for dramatic cuts. So the question is rallying support among all of our Democratic colleagues for President Biden’s budget,” Reed added. “I think everyone recognizes that DoD can be much more efficient, that we have to start making really tough decisions.”