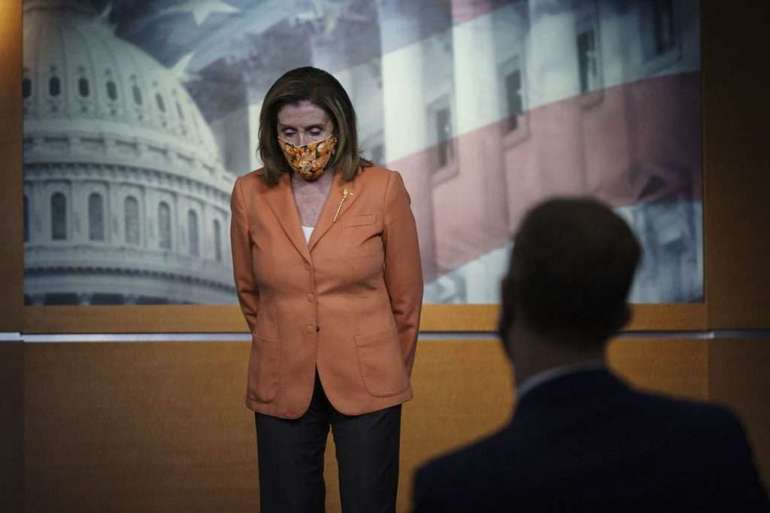 If “we are going to run on Medicare for All, defund the police, socialized medicine, we’re not going to win,” House Majority Whip Jim Clyburn (D-S.C.) warned on the caucus call, according to three people listening.

The Democrats’ warning comes as lawmakers try to assign blame over their election night losses, with progressives’ ambitions beginning to emerge as a top target that could hinder left-leaning policies from advancing in the House.

Pelosi also had her own message to House Democrats, telling them to focus on an “agenda of lowering health care, better paychecks, building infrastructure.” While she didn’t explicitly say it, those ideas are more likely to be appealing to moderate Georgia voters who will decide the fate of the Senate in January.

The next two months leading up to the Jan. 5 runoff will be “fraught with meaning” Pelosi added.

“This has been a life or death fight for the very fate of our democracy. We did not win every battle, but we did win the war,” Pelosi said on the call. “We held the House. Joe Biden is on a clear path to be the next president of the United States.”

Democrats and Republicans in Congress will likely spend those two months battling over a massive coronavirus stimulus package — which has already divided both parties for months — as well as the presidential transition and a potentially seismic Supreme Court decision on the fate of Obamacare.

The comments from Pelosi and Clyburn echo many private conversations that have taken place among members and top aides in the past 48 hours, with moderate Democrats and even some left-leaning members arguing that GOP attacks on “socialism” and “law and order” cost their party support in Trump country.

The call grew emotional at times as some members who lost their races spoke up, including Rep. Debbie Mucarsel-Powell of Florida, who started crying while urging Democrats to remain unified and not “tweet” attacks at one another. Others were clearly not appeased by Pelosi touting the wins for Democrats on Tuesday night — including Biden’s potential victory — saying that didn’t make up for the disappointment of missing a shot at taking over the Senate and losing at least half a dozen Democratic centrists in the House.

Rep. Abigail Spanberger of Virginia, a Blue Dog whose race remains uncalled though she declared victory this week, grew angry as she warned her party against some of the rhetoric she argued hurt moderate Democrats like herself, saying the election results were a “failure.”

“No one should say ‘defund the police’ ever again,” Spanberger said on the call, according to two sources. “Nobody should be talking about socialism.”

Spanberger also warned that if Democrats kept up their tactics in 2022: “We will get f—— torn apart.”

Spanberger was one of several battleground Democrats who faced a barrage of GOP attack ads accusing her of attempting to “defund the police” after she voted for a policing reform bill this summer amid a national reckoning over police brutality and systemic racism.

Pelosi pushed back on Spanberger’s comments, saying Tuesday night wasn’t a failure for Democrats because they kept the House and are likely to oust Donald Trump from the White House.

The California Democrat also instructed members to raise any complaints directly with her.

“I hope any of you who have something to report or feedback will come to me,” Pelosi said, before giving out her personal cellphone number.

House Democrats lost seven seats in battleground districts, including in South Carolina, New Mexico and Iowa. Democrats also lost two seats in South Florida, including one that was hardly on their radar, which some Democrats blame on the potency of “socialism” attacks in a Cuban American stronghold.

Rep. Donna Shalala of Florida, who unexpectedly lost her race in Miami, said on the call that she did not blame top Democrats or the campaign arm: “Leadership has been excellent and I have no complaints.”

But Rep. Pramila Jayapal of Washington, co-chair of the Congressional Progressive Caucus, jumped on the call to defend liberal ideas, saying that’s what keeps the Democratic base motivated to turn out and vote.

“If we don’t keep these folks engaged … we will lose again in 2024, and we may lose again in the next midterm,” Jayapal told Democrats on the call, according to two people who dialed in.

Jayapal conceded that Democrats need to have “conversations about language” as several members on the call complained about charged terms like “defund the police” repeatedly weaponized against them during the campaign. But, Jayapal said, blaming fellow Democrats isn’t the answer, either.

“I ask my colleagues to quickly jump to not quickly blaming certain people, who incidentally play a part in energizing young people,” she said.

Rep. Rashida Tlaib of Michigan also spoke up, saying fellow Democrats shouldn’t “blame myself and others” for pushing issues that matter to their districts.

Thursday’s more than hourlong call also marked the first time Democrats heard from their campaigns chief, Rep. Cheri Bustos, since House Democrats dropped a net five seats in a cycle in which they expected to flip as many as a dozen.

“I’m furious. Something went wrong here across the entire political world,” Bustos told her colleagues, pointing to polls, turnout models and “prognosticators,” according to several sources on the call.

“The voters who turned out look a lot more like 2016 than to what was projected,” Bustos said, adding: “We will do a post mortem.”

The Illinois Democrat has come under intense heat from her colleagues after Tuesday night’s results, which left members and their top candidates once again feeling blindsided by the GOP’s strong showing.

It’s still unclear whether Bustos will make a bid to run the caucus’ campaign arm for the next cycle, which several Democrats said she hadn’t necessarily wanted to do even before Tuesday’s election. The name of at least one Democrat, Rep. Tony Cárdenas of California, has so far been floated to run for the post.

Bustos spent much of her time on the caucus call defending the Democratic Congressional Campaign Committee’s decision to try to expand the battlefield, even in a year when they were defending dozens of Trump district seats. She said Democrats had forced GOP campaigns to spend tens of millions of dollars “playing defense,” arguing that the cash diversion helped protect Democratic incumbents by ensuring the money couldn’t be spent against them.

Bustos — whose own race was so close that it was not called until Thursday morning — also said her campaign team never gave a specific number of seats it expected to pick up.

“We never called our shot,” Bustos said, adding that Democrats believe they will pick up at least one more seat, with Carolyn Bourdeaux expected to succeed Rep. Rob Woodall in Georgia’s 7th District. Democrats also picked up two seats in North Carolina, which went their way after the most recent round of redistricting.

“We built a massive battlefield that could put the candidates you help us recruit in position to ride a wave. At the same time, it could shelter our most vulnerable members during a storm,” Bustos said, according to sources on the call.

John Bresnahan contributed to this report.