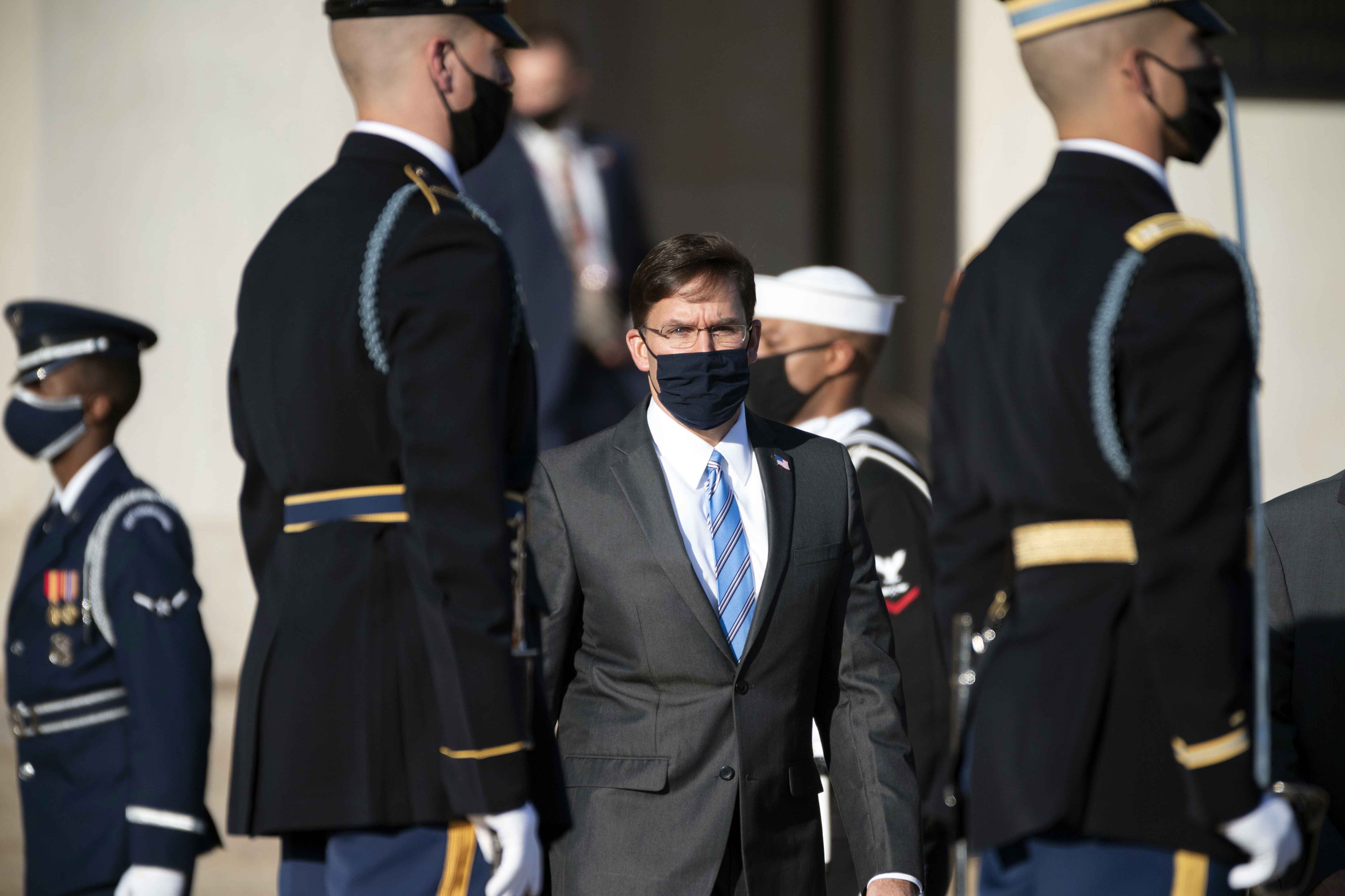 “Secretary Esper is a person of sound character. President Trump has made it nearly impossible for respected public servants like Secretary [Jim] Mattis and Secretary Esper to lead the DOD,” said Sen. Tim Kaine (D-Va.), a member of the Senate Armed Services Committee, in a statement. “For the good of our country and the brave men and women in uniform, I hope he will continue to serve for the remainder of the Trump presidency.”

With an official result that could be hours, days or even weeks away, Esper’s presence sends a signal to allies and adversaries that operations will continue as usual. Some say Esper should stay on until a winner is called, while others believe he should stay until the inauguration, provided the president doesn’t fire him first.

“This is a matter of national security,” said Arnold Punaro, former staff director for the Senate Armed Services Committee and a retired Marine Corps major general. “During the next 76 days, our allies and adversaries should understand that President Trump retains full powers as commander in chief and the chain of command is intact from him to Secretary Esper to the warfighting commanders.”

Joe Biden is closing in on a victory. But he’s staring at a deeply divided nation — and an opponent who’s refusing to accept the results. POLITICO’s Natasha Korecki breaks down how Biden is preparing for a rocky transition.

It’s important to have a steady hand at the Pentagon as questions remain about whether the military will be pulled into handling election-related protests, experts said. This week, thousands of National Guardsmen in at least 10 states are on standby to support local authorities dealing with possible riots.

“I believe he’ll stay to try and ensure the military isn’t thrust into partisan and properly civilian disputes,” said Kori Schake of the American Enterprise Institute, adding that she is confident Esper and Joint Chiefs Chairman Gen. Mark Milley, the president’s top military adviser, would succeed in that goal.

Missteps made by Pentagon leadership in Lafayette Square this summer prompted a reckoning, “causing them to think carefully about how to keep from putting their foot in a wolf trap again,” she said. “They publicly drew wide, bright lines where appropriate military involvement should stop.”

Mick Mulroy, a former deputy assistant secretary of Defense under Trump, noted Milley’s repeated statements in recent weeks that the military will play no role in the election.

“Stability during this time of turbulence as we wait for the results of the election at the Defense Department is very important,” Mulroy said. “Secretary Esper’s leadership in keeping the military out of any domestic political issue will be very important during the time.”

People in and close to the Pentagon, who spoke to POLITICO on condition of anonymity to discuss personnel issues, still expect Esper to resign, but say the uncertainty of the election has put the move on the back burner.

When asked about Esper’s plans on Thursday, Pentagon spokesperson Jonathan Hoffman pointed to comments from August that the Defense secretary is committed to serving the country, “recognizing that he serves the nation and leads the men and women of this department as secretary of defense at the pleasure of the president.”

If Esper does depart in the near future, leadership of the Pentagon in the weeks leading up to a potential presidential transition could be up for grabs. Under DoD statute, Deputy Defense Secretary David Norquist would automatically take over as acting Defense secretary, said University of Texas law professor Steve Vladeck.

But there are lingering questions over whether Trump could install someone other than Norquist as temporary Pentagon chief, Vladeck said.

“If the administration doesn’t buy that or Norquist is also sacked, then we are in Vacancies Reform Act territory and the pool there is much bigger,” Vladeck said, referring to the federal statute for filling government vacancies ahead of naming a permanent replacement.

Under law, Trump could promote a different senior official within DoD, or move over a Senate-confirmed official from a different agency to be acting secretary, Vladeck said.

Within DoD, Navy Secretary Kenneth Braithwaite, an Esper ally, could be a top contender, Vladeck said. However, it’s possible Trump could attempt to install Anthony Tata, who is performing the duties of deputy undersecretary of Defense for policy after the Senate derailed his nomination for the No. 1 policy job, as acting Pentagon chief, he added.

Outside the Pentagon, the pool widens, and a key consideration will be loyalty first and national security credentials second. Trump could move over an agency leader to take over on a temporary basis, while potentially keeping his or her current post.

Acting Homeland Security Secretary Chad Wolf and Energy Secretary Dan Brouillette are possible contenders to be acting Defense secretary who are widely viewed as reliable Trump loyalists. Wolf, in particular, has proven himself a strong ally of the president this year by downplaying Russia’s efforts to interfere in the election and the threat posed by white supremacists, as well as his aggressive response to protesters in Portland and other cities this summer.