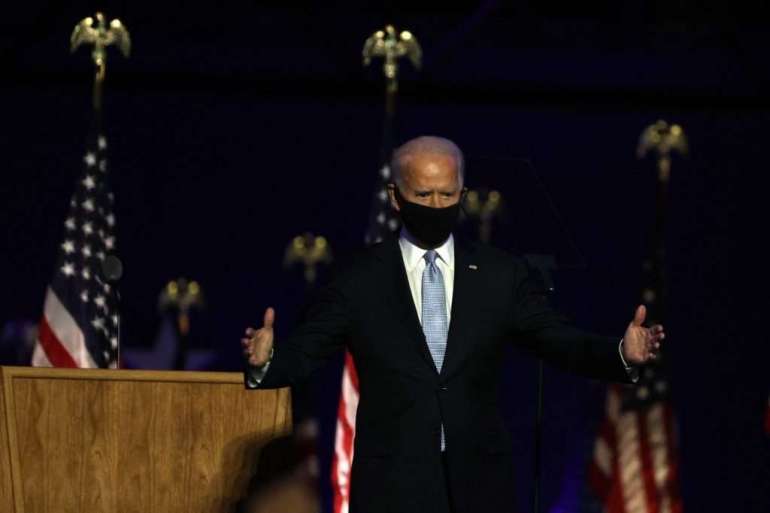 Biden went on to warn that even if a vaccine is approved by late November, allowing some Americans to be vaccinated as soon as later this year, “it will be many more months before there is widespread vaccination in this country.”

For that reason, “Americans will have to rely on masking, distancing, contact tracing, hand washing, and other measures to keep themselves safe well into next year,” Biden said. “Today’s news is great news, but it doesn’t change that fact.”

The U.S. has successively shattered records for daily coronavirus cases in the past week, reporting more than 126,000 new infections on Saturday and closing in on a total of 10 million cases nationwide. More than 237,000 Americans have died from the disease.

Public health experts have warned the pandemic’s toll will only increase in the coming fall and winter months, as the soaring caseloads collide with the annual flu season to potentially overwhelm the country’s strained health care system.

The U.S. is on pace to notch nearly 1 million new coronavirus cases per week by the end of the year, presenting Biden’s incoming administration with a health crisis of epic proportions even before the president-elect assumes office in January.

On Monday, Biden said the rising number of Covid-19 deaths “will continue to get worse unless we make progress on masking and other immediate actions. That is the reality for now, and for the next few months. Today’s announcement promises the chance to change that next year, but the tasks before us now remain the same.”

President Donald Trump, who repeatedly promised that a coronavirus vaccine would be made available imminently in the run-up to Election Day, also weighed in on Pfizer’s announcement on Monday morning.