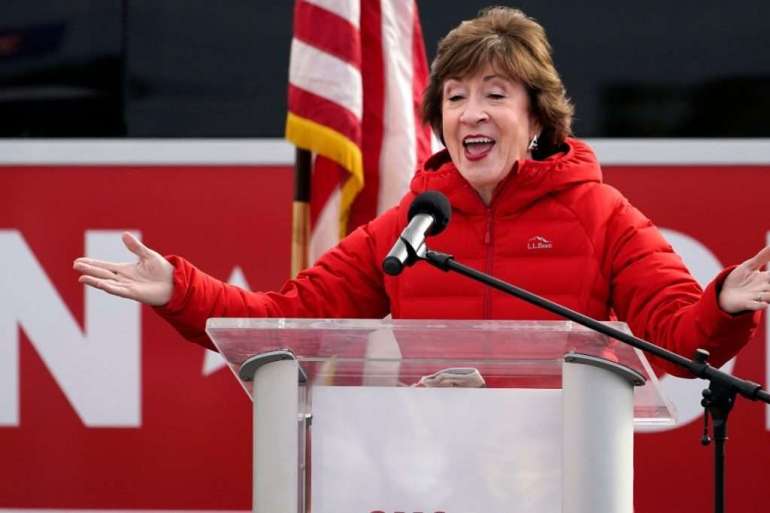 But that doesn’t mean she should be viewed as an automatic “yes” vote. And each pick is going to need to be carefully modulated with Collins and the few like-minded Senate Republicans in mind.

Biden “and I have a long-standing relationship that goes back many years and we worked on issues together in the Senate as well as when he was vice president,” Collins said in an interview this week. “It doesn’t mean that if he appoints someone who is way out of the mainstream, that I wouldn’t oppose them.”

Colleagues in both parties are now in awe of how much sway Collins has after handily winning a race in which she was largely outspent and didn’t lead a single public poll down the stretch. Whenever something contentious comes up in the Senate, one of the first questions will be: What does Collins think?

“She’s sort of like Sandra Day O’Connor on the Supreme Court,” said Sen. John Cornyn (R-Texas), who labored for Collins’ vote for six years as party whip. “You’re going to have to work for it to persuade her.”

Though Collins just survived the most expensive election in Maine history, her first campaign in 1996 was actually closer than her 9-point win over statehouse Speaker Sara Gideon. She admits she won by a larger margin than even she expected, but says she always knew she would come out on top.

Others in the party weren’t so sure: Five days before the election, top Republican officials said in interviews that they believed she’d likely lose in Maine’s unique ranked-choice voting system. And everyone in the party feared Trump’s unpopularity in Maine could make it exceedingly difficult to get Mainers to split tickets.

But Collins surprised almost everyone, outpacing Trump by a whopping 7 points in the Pine Tree State as Gideon lagged behind Biden by 11 points.

“I was very gratified that the margin was so big. That people were able to look at the individual,” she said. “They were smart enough to reject the outright lies that Chuck Schumer and his PAC have hoisted.”

She says at least eight Democratic senators have come calling since she won. And the first call was at 7:30 a.m. after Election Day from aisle-crossing supporter Sen. Joe Manchin (D-W.Va.), who asked her: “What can we do next? How can we work together?”

“These were by and large my friends. It wasn’t Chuck Schumer calling me, let’s put it that way,” Collins said. “Some of them told me frankly that they’d been instructed by Chuck to not co-sponsor my bills, not work with me to advance legislation. Now, some of them followed that instruction from him but some did not.”

Such a strategy by the minority leader isn’t totally uncommon, but party leaders rarely try to stifle a member’s bipartisanship only to see them win reelection and play an outsize role in a narrowly divided Senate. Schumer did not comment for this story.

Collins’ GOP colleagues see Democrats’ failed campaign in Maine as giving her even more juice than before.

“What she went through and the way they lined up against her? I think that fully empowers her in the way she beat it back,” said Sen. Shelley Moore Capito (R-W.Va.).

The simple fact that Biden and Collins spoke recently shows how different her relationship is with the president-elect than it is with the current president. Collins works with top White House officials but rarely speaks to Trump. And she disagrees with the Trump administration’s resistance to providing Biden with transition assistance and top-level intelligence briefings. The president himself publicly criticized Collins in the lead-up to the election for not supporting his third Supreme Court pick.

She said Trump’s legal challenges “should not delay the president-elect, the apparent winner, from having access to the traditional office space, supplies and federal employees to help him make the transition,” she said. “So that on Jan. 20, assuming this holds, he can be up and running.”

Democrats recognize that Collins is going to be integral to their plans. She’s the only Republican left in the Senate that supported Biden’s push for economic stimulus in 2009, and long-standing relationships with people like Collins were one of Biden’s key selling points in the election.

“He wasn’t just friends or working with people who might be closest. So remember, he figured out how to work with Jesse Helms,” said Sen. Chris Coons (D-Del.), a top Biden ally in the Senate. “Having Sen. Collins here and part of conversations is going to be critical and positive.”

After being attacked by liberals as an ineffective centrist for two years following her Supreme Court confirmation vote for Brett Kavanaugh, Collins is showing little appetite for revenge. Instead, she’s already diving back into bipartisan talks and seeking to expand Senate membership in No Labels, a centrist group she co-chairs with Manchin.

And she’s seeking any kind of breakthrough she can find on the deadlocked coronavirus stimulus talks, which have stalled for months even as the economy remains hobbled and the country is seeing a deadly spike in infections. She suggested that Congress could avoid conservative angst over sending money to blue states by providing local aid directly to cities and counties and that there are deals to be had on enhanced health care funding and unemployment relief.

And while she wouldn’t disclose whether she’d discussed with Biden the urgent need to provide a new round of aid to fight the virus and its devastating impact on the economy, she said the Senate can’t wait until January for Biden to be sworn in and to find out who controls the Senate.

Barely a week after finishing her triumphant comeback win, Collins is already feeling the urgency of legislating. She just hopes her 99 colleagues feel it too.

“We can’t wait that long for another Covid bill. You’re talking about Jan. 5. And that is way too long. And I recognize that unemployment has ticked down somewhat,” she said. “I’m glad to see it but I don’t see that as being a lasting phenomenon. And certainly the public health consequences of this pandemic keep getting worse.”