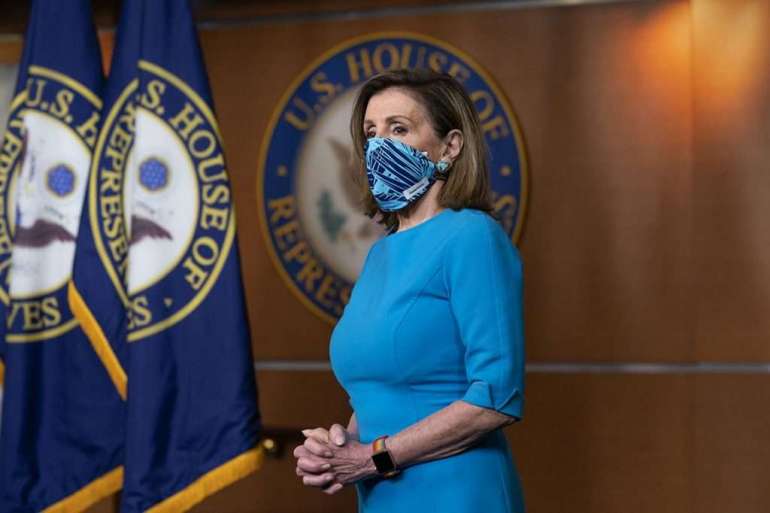 “I consider this a gift, and I can’t wait to be working with Joe Biden and preparing us into our transition into the future.”

Pelosi ran unopposed and only needed a simple majority of the Democratic Caucus during the secret ballot vote. But she’ll still have to clinch 218 votes on the House floor in January to officially become speaker — and she has a much narrower majority to work with this time around after Democrats lost more than half a dozen seats on Election Day.

Much of Pelosi’s current leadership team remains the same, save for one notable addition. Rep. Katherine Clark (D-Mass.), current vice chair, was promoted to assistant speaker — becoming the first woman to hold that position and the highest ranking female lawmaker behind Pelosi.

The appointment of the top three Democratic leaders hasn’t been without some private grumbling, particularly after the caucus’ unexpected string of losses on Nov. 3 shrunk its majority to its smallest in two decades. The slim majority could pose limits on Pelosi and Biden’s legislative agenda, and raises concerns among Democrats about keeping control of the House in 2022.

Pelosi, 80, and Hoyer, 81, have led the Democratic Caucus for nearly two decades — with the 80-year-old Clyburn elevated to whip in 2007 after Democrats won the majority — leading some lawmakers to reignite calls for a transition plan to a younger cadre of leaders.

Despite the complaints, no other lawmakers stepped forward to challenge the three House leaders for their positions.

In her remarks to the caucus on Wednesday, Pelosi underscored the caucus’s priorities for the coming Congress under a President-elect Joe Biden.

Pelosi was nominated via a voice vote, which some privately speculated was done to give political cover to swing district Democrats, allowing them to say they voted against her. So far, only Rep. Elissa Slotkin of Michigan and Jared Golden of Maine have publicly said they would vote against Pelosi’s speakership in January. A handful of Democrats who voted against Pelosi as speaker previously were voted out of office during this cycle.

On the first of their two-day election, Democrats selected their top five Democrats, including the first contested election between Clark and Rep. David Cicilline (D-R.I.) to fill the role of assistant speaker, succeeding Rep. Ben Ray Lujan (D-N.M.) as he departs for the Senate in January. Both Democrats had already served in Pelosi’s inner circle.

Clark — a well-liked progressive and prolific fundraiser — defeated Cicilline in a secret ballot vote of 135 to 92.

Wednesday’s vote caps weeks of member-to-member phone calls and Zoom meetings as each candidate, and their extensive whip team, made their pitch to colleagues. The efforts were more complicated than past years, as Democrats have had few chances to see their colleagues in person. And for the first time this year, members cast their ballots remotely using an iPhone app.

Democratic officials had scrambled in recent weeks to set up an entirely remote voting process for members, eager to avoid any kind of in-person gathering amid soaring coronavirus cases both in D.C. and across the country. This is in contrast to House Republicans, who conducted their leadership elections in-person at a D.C. hotel Tuesday after receiving a special waiver from the city.

Jeffries and his team ultimately designed an encrypted app to be automatically downloaded on member’s iPhones, which will keep each lawmaker’s vote secret even to the vote counters.

The other competitive race will be held on Thursday, for the position of caucus vice chair. Reps. Robin Kelly (D-Ill.) and Pete Aguilar (D-Calif.) are contending for vice chair.

Kelly would be the first Black woman elected to leadership since Shirley Chisholm in 1977. Aguilar would be the highest-ranking Latino, after Luján’s election to the Senate this month.

Democrats will need to decide one more leadership post in the coming weeks: the chair of the Democratic Congressional Campaign Committee.

The race for DCCC chief has become one of the House’s closest-watched contests since Rep. Cheri Bustos (D-Ill.) opted not to seek a second term this month following the party’s disappointing election results.

Democrats will vote on the DCCC race as well as a slate of committee chairs when the House returns after Thanksgiving break.