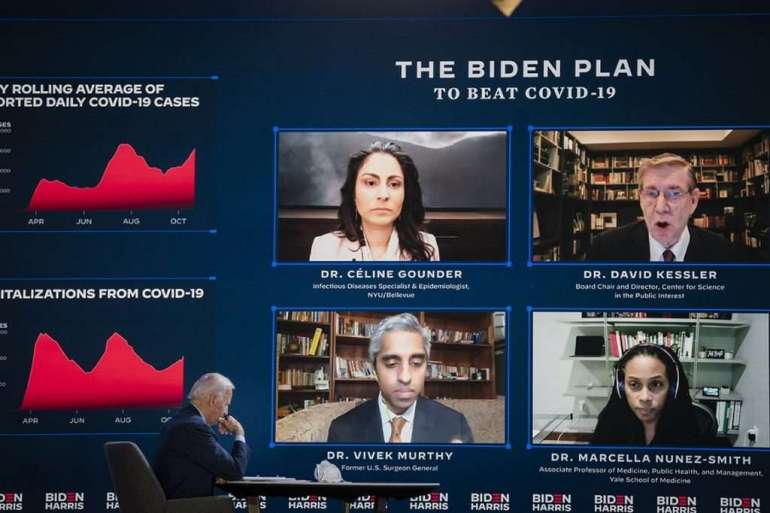 His selection of Nunez-Smith, a Yale researcher who was born in the U.S. Virgin Islands, for such a visible post reflects how his incoming administration is trying to reach minority voters, who helped revive his lagging bid for the Democratic nomination and who have often felt ignored by the outgoing Trump administration. It also shows Biden recognizes that the pandemic can’t be beat without going to where it’s doing the most damage.

“We’re thinking about [health care inequality] across all policy domains and all policy areas,” Nunez-Smith told POLITICO this week in one of her first interviews since joining the transition. “I’m not the only voice at the table centering us in that way. That’s exactly what we need to be doing.”

Nunez-Smith faces a daunting task. Minorities have less access to health care, less trust in the health care system, a higher rate of chronic conditions like diabetes that elevate the risk for Covid – and the Trump administration’s disjointed response to the pandemic has meant testing, contact tracing and other public health measures aren’t always reaching them. They have poorer housing, less education, worse access to food and public transport – all of which contribute to worse health. In addition, minorities are more likely to be essential workers; people who stock grocery shelves, staff public transit systems, or take care of frail elderly people in nursing homes.

“Many people are sacrificing on the front line and don’t have the luxury of social distancing,” said Nunez-Smith, who during a virtual Biden roundtable on Wednesday introduced front-line health care workers who shared their experiences.

Biden assembled a health team even before he clinched the nomination and was getting briefed almost daily by March. In August, watching sickness, deaths and job loss in minority communities get worse and worse, Biden’s advisers wanted someone to brief the candidate on how to address the deep inequities – now and as the country envisions its post-pandemic health care system.

Vivek Murthy, one of his top coronavirus advisers who was surgeon general in the Obama administration, knew Nunez-Smith’s work; he also has Yale roots and they had both trained at Brigham and Women’s Hospital in Boston. At his suggestion, they brought her in.

Nunez-Smith isn’t a fixture on the national policy conference circuit. She wasn’t active on the Biden’s campaign. An academic and clinician who a few months ago was named an associate dean at Yale’s School of Medicine overseeing equity research, she talks in science, not sound bites. She has spent a lot more time partnering with community organizations in New Haven, including serving on Connecticut’s coronavirus reopening panel, than on TV.

And Biden liked all that. Last week he added her to his coronavirus transition team, making her part of a triumvirate alongside Murthy and former Food and Drug Commissioner David Kessler. (Kessler is a past dean of Yale’s medical school, but Nunez-Smith said, “He left literally the day before I got there.”)

Emphasizing disparities isn’t just about righting wrongs, historic and contemporary, said Kirsten Bibbins-Domingo, another physician and equities researcher at the University of California, San Francisco. It’s also basic epidemiology. There’s no way to beat back a virus spreading from coast to coast without rooting it out of the worst-hit communities. “It’s the key to getting the pandemic under control,” Bibbins-Domingo said.

Among Nunez-Smith’s immediate concerns: ensuring that minority communities get priority access to the vaccines that may start becoming available as early as next month – and restoring their frayed trust in science and government so that they are not afraid to get immunized. Vaccines can’t blunt an outbreak if enough people don’t get them.

“We want to move from policies to the blueprint on Day One,” she said.

That means recognizing and responding to the disproportionate impact of Covid-19 on both physical and mental health – and understanding that Covid-19 is not just an acute disease, that many people will have persistent chronic symptoms of unknown duration and will need access to care no matter how underserved their neighborhoods have traditionally been, she said.

“They are walking the walk,” Georges Benjamin, the executive director of the American Public Health Association, said of the Biden team. If you look at Biden’s policies and programs, he said, “health equity is part of everything he says.”

Rep. Lauren Underwood (D-Ill.), a nurse who worked for HHS during the Obama administration and is now a health care voice in the Congressional Black Caucus, praised the transition for laying out a three-pronged strategy for the pandemic – “public health, economic and equity arenas” on equal footing, and based in science.

“It is critical the Biden Covid Taskforce has a leader who is an expert on health equity issues as we fight a virus that has, sadly, magnified existing health inequities,” Mandy Cohen, the North Carolina health secretary and an HHS official under President Barack Obama, said in an email. “We have been working incredibly hard in North Carolina to address the disproportionate impact on historically marginalized communities – surging free testing in underserved communities, using community health workers and paying for wraparound supports (including COVID relief payment for wage replacement.)”

“So much work to do in this space,” added Cohen, whose name also comes up as a possible Biden health care appointment.

The Trump administration was slow to focus on disparities, failing even to collect data in the early months. It belatedly made an effort to ramp up testing in underserved areas, but has not changed the unequal impact, leaving many aspects of the response up to the states. President Donald Trump has downplayed the virus and has basically dropped efforts to contain surging infections in the past two weeks while he’s disputed his election loss. He hasn’t met with his task force in months: Biden gets briefed multiple times a week, and has put several dozen people to work planning a massive public health response.

Arising partly from structural racism, the disparities cut across income levels – it’s not just among the poor. Unequal access to health care, poorer quality care, and institutionalized racism existed before the coronavirus struck, and they will persist after.

“The pillars for us to get through this includes mitigation of the virus, it includes protecting the most vulnerable and it includes restoring faith in institutions, science and scientists, “ said Howard Forman, who taught Nunez-Smith when she was a young doctor on a fellowship at Yale, and is now her colleague there.

“We have failed. We have caused dramatic harm to communities of color, poor communities and minority groups,” Forman added. “It’s the greatest disgrace we have witnessed in this time.”

In the long term, it means making sure these communities are no longer underserved. That includes bolstering public health and primary care, and addressing “social determinants of health” that shape a community’s well-being, like access to housing and good jobs.

The health system can’t fix those problems alone. But before the pandemic hit, their impact on health was getting broad attention, and health care groups were beginning partner with other government and community efforts on solutions.

“The predominance of minorities in essential services jobs that are public facing … it’s not a mystery why the [Covid] numbers are higher in African American and Hispanic groups,” said Dr. Eric Goosby, another Biden coronavirus panel member and the U.S. global AIDS coordinator in the Obama White House. Throw in the higher rates of chronic diseases that heighten the coronavirus risk and the equity work becomes “that much more urgent.”

During a symposium at Yale soon after taking on the associate deanship, Nunez-Smith spoke about how solutions, for Covid and health equity in general, have multiple tentpoles. “We need clarity of science,” she said. “And we need key partnerships … neighbor to neighbor. Friends to friend. Community to community.”

Those are lessons that people working with, or within, underserved communities have learned over and again.

“What Covid did was expose the inequities to a broader audience,” said Benjamin, of the public health association. “But you’ve got somebody raising the issues, someone who cares about it. And someone who understands the science of it.”

Adam Cancryn contributed to this report.