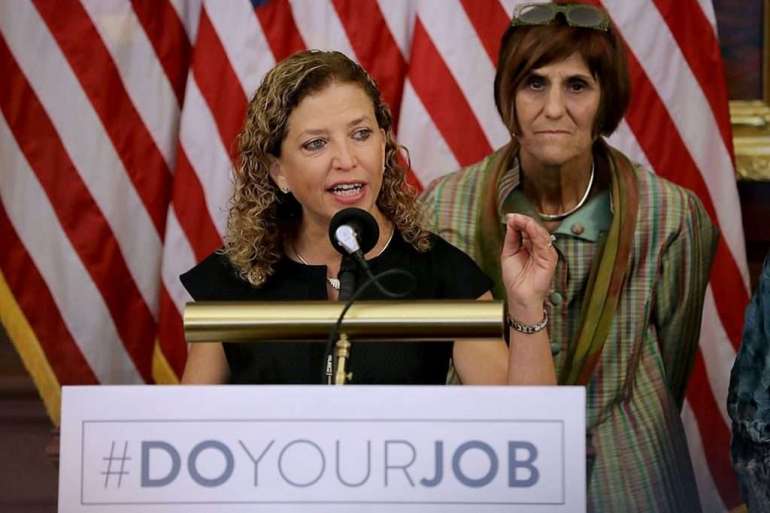 After a disappointing election in which House Democrats saw their majority shrink, the race could become a proxy fight for simmering unhappiness with the top House Democrats, with some seeing Wasserman Schultz, 54, as a relief valve for pent-up angst with the top-down leadership style.

But backers of DeLauro — who is also close with retiring Chair Nita Lowey (D-N.Y.) — are confident that she’ll win and think the prospects for a tight race are overblown. The Steering Committee will vote the week of Nov. 30, with the entire caucus holding elections in early December. The full caucus typically backs the Steering Committee’s pick.

“She got all of these endorsements because she has 44 members on her whip team,” said Rep. John Larson (D-Conn.), who’s stumping for DeLauro. “She has such broad support because people respect her. They’ve witnessed her work product. They’ve watched her over the years work on legislation, work across the aisle, develop relationships with caucus members.”

Rep. Marcy Kaptur (D-Ohio), the most senior member of the House Appropriations Committee and the longest-serving woman in Congress, is also in the running and is expected to pick up some support.

But Kaptur, 74, who’s perceived as more conservative than her opponents, isn’t expected to garner enough support for a serious bid. What votes she initially receives could ultimately fall to DeLauro, according to lawmakers and aides watching the race.

Supporters of Wasserman Schultz point to her fundraising for Democrats and the detailed equity and reform plans that she has put forth for the appropriations process. Rep. Anthony Brown (D-Md.), a member of the Congressional Black Caucus, said he’s whipping for Wasserman Schultz because of those proposals and because she has been the most “consistent in articulating her vision.”

Rep. Ami Bera (D-Calif.), a leader of the moderate New Democrat Coalition, said, “Debbie has always been there for me, introducing me to her donors. I don’t think you can underestimate that in terms of who’s a team player.” Wasserman Schultz is also seen as a “mentor” to freshmen members about annual spending bills, Bera said, and she has pledged to ramp up that education if she’s elected chair.

“Debbie was the first person to ever talk to me about that,” Bera said of the annual appropriations process.

But Wasserman Schultz also remains somewhat contentious, with baggage such as her resignation from the DNC in 2016 after WikiLeaks released her emails disparaging Sen. Bernie Sanders’ presidential campaign.

DeLauro’s allies point to her extensive record of working across the aisle with senior Republican appropriators like Rep. Tom Cole (R-Okla.), in addition to 18 years as a co-chair of the Steering and Policy Committee, where she helped countless members secure committee spots. DeLauro and Wasserman Schultz have both pledged to reform the appropriations process, increase member education and bring back earmarked spending.

DeLauro raised some eyebrows last week when she announced that she would be giving up her top spot on the Steering and Policy Committee, which some took as a projection of confidence that she would win the Appropriations gavel next month.

Others in the caucus privately noted that DeLauro shouldn’t be managing the process as she campaigned for chair. Pelosi picked Rep. Cheri Bustos (D-Ill.) to fill DeLauro’s position, allowing the Illinois Democrat to remain in the speaker’s leadership circle after deciding not to pursue another term as campaign chief.

“A vote of the caucus in this nature is very personal,” Larson said. “And Rosa DeLauro will work right up until the moment of that vote. Obviously, we feel confident that she has the votes and that she will prevail, but she’s taking nothing for granted.”

“At the end of the day, it’s a relationship business,” he added. “And I dare say Rosa DeLauro is going to do extraordinarily well with freshmen and with every single caucus group within the Democratic caucus.”

Rep. Jim Himes (D-Conn.), who represents a neighboring district to DeLauro, is a former chair of the moderate New Democrat Coalition. Himes said he has previously sparred with DeLauro, who’s more liberal, on trade issues. But he’s endorsing her bid because of how she handled those disagreements.

“The way she handled it with me is something that I’ll never forget,” he said. “She’s a listener and I saw up close and personal how she disagrees with people. … We’ve been on opposite extremes and she just behaved in a way that was exemplary.”

The competition between DeLauro and Wasserman Schultz recently flared over the Hyde Amendment, a provision tucked into annual spending bills for decades that bars the use of federal funds to pay for abortion.

During a recent call with the New Democrat Coalition, DeLauro said she helped maintain the amendment in annual spending bills in order to curb fighting that could blow up the appropriations process.

“I think she forgot who she was speaking to,” said Rep. Kathleen Rice (D-N.Y.), a leader of the New Democrats who backs Wasserman Schultz. “We’re very socially forward. … Her point was it was not a good time to be arguing over the Hyde Amendment. But she didn’t give any indication about what her position would be going forward.”

“I will say anyone who says they have it locked up isn’t telling the truth,” Rice said of the race.

But DeLauro has publicly pledged to fight for the removal of the Hyde Amendment, which earned her the endorsement of the National Women’s Law Center last week.

Himes, who also listened in on the New Democrat call, said DeLauro was raising Hyde as an example of her “willingness to do things that are completely contrary to what she believes in in service of a broader goal.”

“There’s no secret“ where DeLauro stands on Hyde, he said. She allowed it to remain “even though it went against every fiber of her being,” he said.

Lawmakers backing Kaptur are hopeful the race comes down to the Ohio Democrat and DeLauro. Kaptur’s allies say they support a leadership election system that honors seniority, the pursuit of more Midwest representation in congressional leadership and Kaptur’s blue collar roots.

“I’m someone who believes in seniority,” said Rep. Mark Takano (D-Calif.), who’s whipping for Kaptur. “In an era where we need to restore some sense of norms … we can’t just throw out seniority.“

Takano said he doesn’t believe that Kaptur is trailing DeLauro or Wasserman Schultz in terms of support.

“I think Rosa has a strong presence,” he said. “I do think that it’s a question of who’s still standing after the first round of votes.”