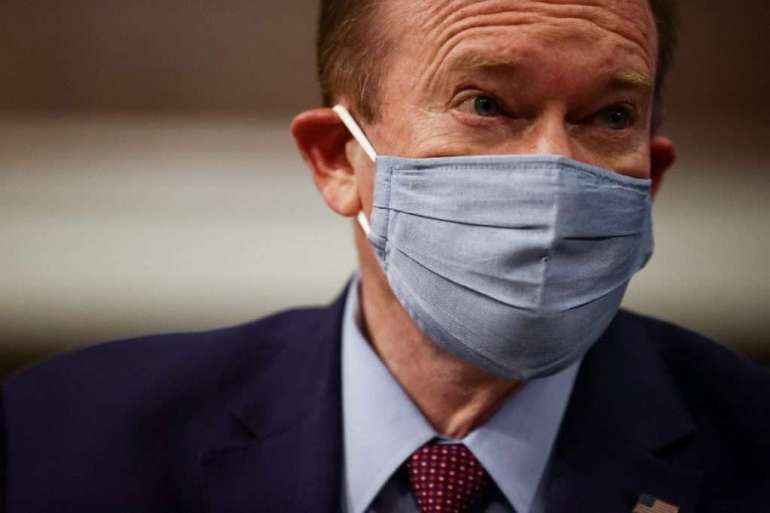 Sen. , a member of the Foreign Relations Committee who is considered to be on the short list to be secretary of state under President-elect Joe Biden, said now is the time to act.

“If we are going to make it as a world community of democracies, this is an absolutely pivotal year,” the Delaware Democrat said. “This is a pivotal moment in world history. In our history.”

Nowhere was the level of urgency more acute than in Hong Kong, where China’s crackdown is seen as a test of the resolve of democratic nations to check Beijing’s efforts to undermine democracy.

“We are sort of disappearing before the world’s eyes,” said Emily Lau, who was a legislator in the formerly British-administered territory, in a video appearance. “What is disappearing? Our freedom. Our personal safety. The rule of law.”

There was, however, a noticeable feeling of optimism that a new administration in Washington will play a leading role again after the more unilateral approach by President Donald Trump alienated many of America’s traditional allies.

Angus Campbell, Australia’s chief of defense, told the forum that he is “very optimistic about the future of American power in the world.”

But there was also a strong sentiment that smaller democratic nations cannot simply rely on the U.S.

“The world is in crisis,” Canadian Prime Minister Justin Trudeau told the gathering, citing the coronavirus pandemic, climate change and inequality. “Instead of crossing our fingers and hoping that the big powers will figure this out, let’s look at what we can do to make a difference together. … Let’s not wait for someone else to act, let’s do it ourselves.”

While there was no broad consensus on how to reboot the democratic alliance, speakers agreed that the traditional arrangements that encouraged solidarity in the second half of the 20th century, such as NATO, the World Trade Organization and the United Nations, are insufficient in their current forms to confront China.

Jens Stoltenberg, NATO secretary general, said the Cold War-era military alliance “should remain a regional alliance, but needs a more global approach” to deal with the rise of China in space, cyberspace and other domains, including by partnering with Japan, Australia and New Zealand.

But the report issued at the outset of the forum, which drew upon the insights of 250 experts around the world, also warned that “there is no appetite for a return to the days in which Asian countries place themselves under Western power structures, even if today they are under new management.

“What will work in Asia will be flexible alliances and partnerships between the United States and individual Asian nations, sometimes in combination with other Asian nations, and sometimes with the added participation of other allies from outside Asia,” it added.

One promising model, multiple participants and China watchers agreed, is the Quadrilateral Security Dialogue, or Quad, an informal partnership between the U.S., India, Japan and Australia that has gained strength in recent years.

“There may well be aspects of the four-nation combination that can be replicated elsewhere,” the Halifax report contends. “There are few bells and whistles, and there don’t need to be to make a useful partnership work. Approaches like this could herald a golden age for diplomacy as nations put these new-style partnerships together.”

Robert Gates, who served as defense secretary for Presidents George W. Bush and Barack Obama between 2006 and 2011, said in an interview that he believes the arrangement, which was conceived in 2007, has turned out better than expected..

“This Quad that has been developed — of India, Australia, Japan and the United States banding together to defend the interests of democratic states, politically, economically and militarily — is a very positive step,” he said.

But without added U.S. military and diplomatic heft, many see other more regional structures such as the European Union and the Association of Southeast Asian Nations as insufficient vehicles.

For example, a new report from the Atlantic Council think tank argues that the U.S. should take advantage of “extraordinary gains and interoperability and cooperation” between American and French military forces to strengthen the democratic presence in the Indo-Pacific.

When it comes to trade, speakers made appeals to fashion “a global free-trade zone for democracies” to ensure less reliance on Chinese goods and technology.

“The United States-Mexico-Canada Agreement and the European Union’s single market are natural building blocks for the eventual creation of such a global, democratic free-trade club,” according to the Halifax report. “This should be extended to include the United Kingdom, India, Japan, South Korea, Australia and all other Indo-Pacific democracies, as well as democracies in Africa and Central and South America.

“From such a position of strength,” it adds, “democracies should then coordinate policy and investment decisions related to consumer and supply chain dependence.”

China isn’t planning to cede that ground. After signing the Regional Comprehensive Economic Partnership on Nov. 15 — now the world’s biggest trade deal between 15 Asia-Pacific nations — Chinese President Xi Jinping further expanded his ambitions Friday, announcing that Beijing will seek to join the Comprehensive and Progressive Trans-Pacific Partnership Agreement, a trade deal originally designed by 12 of China’s neighbors as a response to Beijing.

While the U.S. helped negotiate the original deal, Trump withdrew in one of his first acts as president in January 2017.

Some experts are also calling for an informal tech-focused club of democracies to check China’s efforts to use technology to stifle the flow of information and impinge on personal liberty.

For example, former State Department official Jared Cohen, who is now the CEO of Jigsaw, a technology incubator started by Google, and Richard Fontaine, a former National Security Council official and leading think tank scholar, are proposing “uniting the techno-democracies” in what they call the T-12.

It would be a new intergovernmental organization built around the core G-7 economic partners of Canada, France, Germany, Italy, Japan, the U.K. and the U.S., but also add India, Australia, South Korea, Sweden, Finland and Israel.

Another potential model is the “Clean Network,” the unfolding campaign against Chinese tech giant Huawei; nearly 50 countries have agreed to participate so far, Secretary of State Mike Pompeo told the forum.

“You shouldn’t let the Chinese Communist Party have access to your telecommunications network,” he said.

The interest in greater tech cooperation is fueled by a combination of Chinese censorship, intellectual property theft, and espionage. And China in 2020 added $1 trillion of state tech spending to its five-year plan.

Also driving the fears are the fact that Chinese companies are adopting artificial intelligence technologies faster than the U.S. and its allies.

“Because we have data protection rules, our artificial intelligence is falling behind,” Kersti Kaljulaid, the president of Estonia, told the forum. She urged smarter regulation to help keep pace with Chinese advancements in AI systems, “which can learn faster” due to the regime’s disregard for personal privacy.

A number of other long-standing international organizations are also getting a fresh look.

British Prime Minister Boris Johnson has advocated expanding the G-7 to include India, Australia and South Korea, an informal arrangement that he can pursue as Britain takes over the G-7 presidency in January.

“You’re going to need some level of new architecture,” said Ian Bremmer, president of Eurasia Group, a political risk consultancy, in calling for an expansion of existing partnerships.

He cited Japan’s interest in joining the Five Eyes intelligence-sharing alliance between the U.S., Britain, Canada, Australia, and New Zealand.

A new report published by the Republican-led Senate Foreign Relations Committee also singled out the need to restore traditional diplomatic links between the U.S. and its European allies.

“Transatlantic security and prosperity requires that the United States and Europe renew our commitment to each other and pledge to use all of our combined tools to succeed,” the report said, or risk “losing the fundamental principles of open societies.”

Coons, in an interview, said traditional and more innovative international arrangements will be needed to counter Beijing.

“Institutions like ASEAN and the WTO and NATO and the U.N. all need a fresh look,” he said. “Many of them are a little creaky, a little tired. But I think our first step is to re-engage in a supporting and positive way and to strengthen them, and sustain them, at the same time we’re considering whether they are all purpose-built for our current moment.”

But convincing democracies to cut back their economic and technological reliance on Beijing creates challenges.

“This is an ambition fraught with obstacles from domestic interest groups,” acknowledges the new report unveiled at the Halifax forum.

“It’s not free to stand up to China,” Pompeo told attendees. “There are costs.”

“Building greater flexibility, as well as depth, into the culture of alliance and partnership formation in the twenty-first century naturally means not asking countries to make black and white choices, for example between Beijing and Washington on trade,” the Halifax report recommends.

Campbell, the chief of Australian defense forces, agreed. “This question of choosing is something that I think to the fullest extent possible we should avoid causing smaller countries, middle-sized countries, and geographically-proximate countries from feeling that they don’t have a choice,” he told the forum. “They ought to always have a choice.”

Still, there was a sense of relief among attendees about the choice that American voters made this month.

Coons described the reaction from allies to Biden’s victory as “uniform jubilation” that the U.S. will reclaim its leading role in global engagement.

“There are a lot of countries now in Europe and elsewhere that are in a different palace vis-a-vis China than they were two or three years ago, in no small measure because of the measures that Xi has taken,” he said, citing China’s crackdown on Hong Kong and the internment of one million Uighur Muslims. “In a way they’ve been helped by the aggressive posture of President Xi and his wolf-warrior diplomacy.”

There is only one viable response, Leon Panetta, another former secretary of defense and CIA chief, told the Halifax forum.

“What is it that China fears? It fears alliances,” he said.

But even that won’t be enough, warned Virginia Sen. Tim Kaine, a member of the Armed Services and Foreign Relations Committees.

“We really need a more vigorous democracy promotion project that will take advantage of the fact that there are democracies all over the globe,” he said in an interview. “It’s the governing model itself that is under attack from authoritarians.”

Luiza Savage and Lara Seligman contributed to this report.