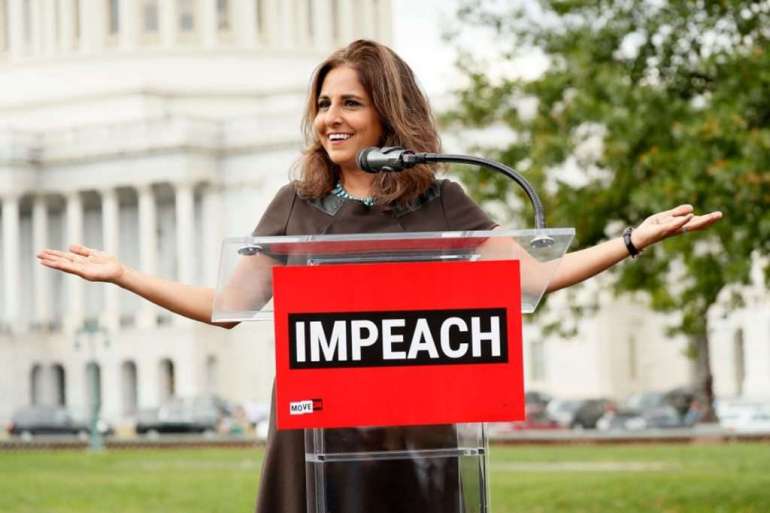 “It’s pretty crazy to me to think that she can go back and … eliminate all the tweets that she’s sent out over the last, whatever, months, years. And I think it’s really a misstep by the administration,” said Cornyn, who also occasionally does battle on Twitter. “I really am a little surprised, particularly on the OMB nominee that there hadn’t been at least some consultation. I mean some of these problems can be avoided. And people, you know, saved from the embarrassment.”

While Democrats praised Tanden for a career of passionate advocacy and understanding how government support can help families, her most immediate problem is a very modern one: a Twitter account that has often lashed Republican senators. Perhaps mindful of that, she appears to have deleted more than 1,000 tweets over the past two weeks, but that may have only further fueled Republican acrimony.

“She’s been pretty partisan in some of her previous positions. And in many cases, with respect to Republican senators who would have to vote on her potential nomination,” said Sen. John Thune (R-S.D.), the GOP whip. He was noncommittal about whether Tanden would receive a floor vote under Republican control and a Senate Majority Leader Mitch McConnell.

One notable attack was directed at Sen. Susan Collins (R-Maine) in 2018 for voting to confirm Supreme Court Justice Brett Kavanaugh; she called Collins, a key swing vote, “a fake defender of Roe v. Wade” in a statement and accused her of “flat out deception” in describing Kavanaugh’s position on birth control.

John Podesta, the former White House chief of staff whom Tanden succeeded as president of the Center for American Progress, said Tanden had “drawn a bit more fire from some quarters” than Biden’s other nominees to date.

But he urged Republican senators to look beyond Tanden’s Twitter feed and focus on her record.

“If they know her or if they meet with her or if they talk with her they’ll recognize the depth of her knowledge, the fact that she is a person of the highest integrity,” Podesta said. “If they give her a fair hearing, I think she will win them over.”

Sen. Lindsey Graham (R-S.C.), who is in line to run the Budget Committee that would oversee Tanden’s confirmation, said of Tanden: “She had a lot to say. It will be a long hearing. Uphill.”

Asked for comment, a Biden transition spokesperson pointed to Biden’s statement Monday praising Tanden and other members of his economic team as “respected and tested groundbreaking public servants.”

Still, Tanden won’t need to win unanimous support from the GOP — far from it. Even if Democrats lose both races in Georgia and are stuck with a 52-48 Republican majority, they’d just need two Republicans to vote for Tanden if all Democrats support her.

“If we don’t take back the Senate that might be a challenge,” said Sen. Mazie Hirono (D-Hawaii). “But let’s see what happens. I don’t know how many Republicans are really going to go after someone that has the kind of background and experience she has to deal with all the policy implementation that OMB does.”

And the good news for Tanden is some of the senators most predisposed to helping Biden get his Cabinet are undecided. Collins said all she knows of Tanden is she’s heard “she’s a very prolific user of Twitter.”

Sen. Mitt Romney (R-Utah) said he doesn’t know Tanden but will examine her record and “give it a very thorough evaluation before I make a decision.” Sen. Lisa Murkowski (R-Alaska) said she doesn’t “know anything about this woman other than apparently she’s generated a lot of controversy.”

Tanden’s nomination even had some Democrats scratching their heads, wondering how she’ll make it through the upper chamber unscathed.

“When I found out last night that she was going to be the pick, my first response was, ‘can she get confirmed?’” said one House Democratic lawmaker who supports Tanden’s nomination and asked to remain on background to candidly discuss the pick. “How the hell are they going to confirm her?”

Under President Donald Trump, Senate Republicans pushed through the former hard-line GOP Rep. Mick Mulvaney for OMB chief, then replaced him with Russ Vought — a former official at the lobbying arm of the conservative Heritage Foundation.

“Honestly, the hypocrisy is astounding,” Minority Leader Chuck Schumer said on the Senate floor. “If Republicans are concerned about criticism on Twitter, their complaints are better directed at President Trump, who has made a hobby out of denigrating Republicans on Twitter.”

OMB is a critical agency at the heart of any administration’s fiscal and regulatory agenda, charged with implementing the president’s vision for the country across the federal government. And Democrats appreciate that Tanden relied on public assistance programs when growing up, giving her a deep understanding of her agency’s mission.

“After my parents were divorced when I was young, my mother relied on public food and housing programs to get by. Now, I’m being nominated to help ensure those programs are secure, and ensure families like mine can live with dignity,” Tanden said Monday afternoon on Twitter.

Under the Biden administration, the OMB chief could play a central role in carrying out an ambitious climate agenda or health care expansion for millions of Americans through rulemaking across federal agencies. Tanden — an outspoken Democratic operative and activist with extensive policy knowledge and a seasoned Sunday show veteran — could easily step into that job.

Democrats see her as effective at communicating the president’s annual budget proposal to Congress and detailing the president’s funding wish list and priorities. In addition to preparing an annual budget, OMB is the final backstop for all federal policymaking, where rules are either approved for implementation or quickly wither away.

If confirmed, Tanden would be the first woman of color and only the third woman to ever lead the agency behind Sylvia Mathews Burwell, who was confirmed unanimously by the Senate in 2013, and Alice Rivlin, who also founded the Congressional Budget Office and served as vice chair of the Federal Reserve Board.

Progressive senators and liberal groups have lauded Biden’s choice of Tanden after fearing the president-elect might choose Bruce Reed, a former Biden chief of staff viewed by progressives as a deficit hawk. Despite initial questions as to whether progressives would embrace Tanden for OMB, both Sens. Elizabeth Warren (D-Mass.) and Sherrod Brown (D-Ohio) signaled they would vote to confirm her on Monday. Sanders, who has clashed with Tanden and her organization in the past, hasn’t commented yet on the nomination.

And if Senate Republicans reject Tanden outright, it could push Biden to play “hardball,” Hauser said. The administration could make aggressive use of the Vacancies Act, tap recess appointment powers, or otherwise install Tanden in a position of power that doesn’t require Senate confirmation.