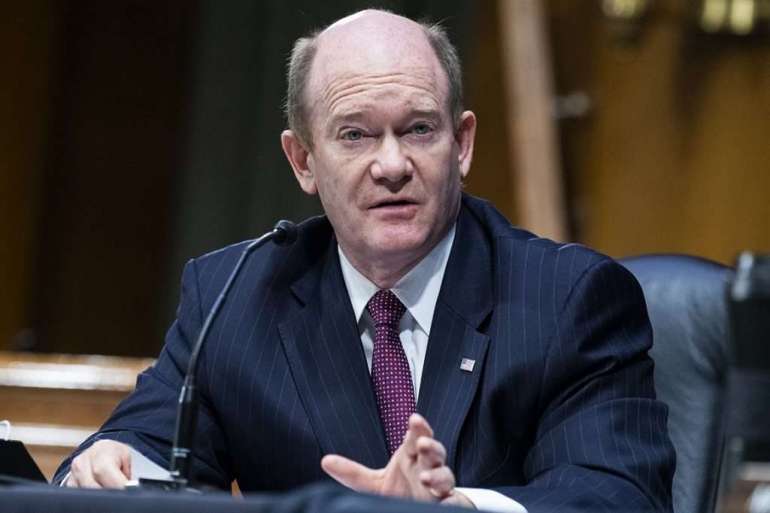 To the occasional annoyance of the left, Coons has spent a decade developing relationships with Senate Republicans across the spectrum. Those partnerships will be more important than ever as Biden faces the real possibility of at least two years of a GOP Senate majority and a Republican Party still led by an antagonistic former President Donald Trump.

Despite Biden’s love for the Senate and for cutting deals, the reality is that more than half the Republicans he last served with are gone — and their replacements often are not exactly looking for compromise. It hasn’t always been straightforward for Coons to maintain GOP relationships during the Trump era either. Coons’ wife, Annie, often has this reaction when he recounts a recent discussion with, say, Trump ally Sen. Lindsey Graham (R-S.C.): “Oh, my God.”

“She says, ‘How can you possibly? After this, after that, after this?’ And I say, ‘Honey, it’s my job, it’s my job. And she said: ‘You seem to actually like them,’” Coons said in a nearly hourlong interview. He refers to his Senate colleagues as “my family.”

Such a sentiment is far from universal in a Senate split not just on party lines, but on the simple concept of whether Biden has even won the election. The reluctance by most Senate Republicans to dub Biden the president-elect has undercut both the presidential transition and Biden’s ability to get guidance from Republicans about who can be confirmed to the Cabinet.

“It’s been a very challenging period for there to be actual consultation,” Coons conceded. “It’s hard when the public posture of some of these folks is: ‘He’s not the president-elect.’”

Privately, though, things are smoother. In the immediate aftermath of the election, several GOP senators, including Graham, privately called Coons to let him know they needed to work together.

The transition from top State Department contender to Biden’s man in the Senate has been a head-spinning one for Coons. Not long ago, Coons was all-in for the secretary of State job, a position he pursued after years on the Senate Foreign Relations Committee that shaped both his view of the world and of Senate Republicans. Republicans were even privately hopeful he would be nominated.

Coons said he never saw himself in competition with Blinken; he thought Blinken would be national security adviser, not the country’s top diplomat.

But after Biden decided that Coons would be more effective holding onto Biden’s old Senate seat and accumulating power on key Senate panels, Coons had long conversations with Biden, Blinken and other officials about taking leading roles on China policy, prioritizing national service, the issue of faith in the Democratic Party and the wonky topic of intellectual property.

“I can’t say I’m not disappointed to not be joining the administration,” Coons said. “But, you know, a week later, I’m really optimistic that I’ll have the opportunity to be centrally involved.”

The Biden transition declined to comment on Coons’ role working with the GOP. But in a Friday night interview with CNN, the president-elect highlighted Coons’ bipartisan bona fides and called him “brilliant.”

Some of Coons’ relationships with Republicans are well known, like those with Graham or Sen. Thom Tillis (R-N.C.), who wrote a bill with Coons protecting special counsel Robert Mueller from being fired by Trump. Others are more surprising.

Conservative Sen. Jim Risch (R-Idaho) has a reputation for being a bit prickly. Yet he and Coons frequently have long phone conversations and consider each other allies and friends on the Senate Foreign Relations Committee, which Risch chairs. Risch even took the time to do an interview about Coons, though he regularly declines reporters’ requests in the Senate halls.

“Chris is a natural when it comes to relationships, and primarily it’s because he’s so straightforward. When I talk to Chris, I know I’m not getting a line of baloney,” Risch said. “And when he and I talk about an issue? I don’t worry that I’m gonna read it somewhere.”

“He has excellent relationships with a tremendous number of senators, including many Republicans,” said Sen. Pat Toomey (R-Pa.), who works with Coons regularly. “And I would include myself in that.”

Coons praised Toomey for being one of the first Senate Republicans to admit that Trump had probably lost. He said he can get along with someone like Toomey, a doctrinaire economic conservative who’s in line for the Banking Committee chairmanship, by conceding they won’t find common ground everywhere.

“It’s not like, you know, Pat Toomey comes in and sits down says: ‘How about abortion? You’re just wrong.’ He comes in and sits down: ‘Let’s talk about can we get our background check bill passed? And can we improve the process so there’s a chance [for] more amendment votes?’” Coons said. “Because that’s what’s here.”

Coons’ comments came at the end of another long day of juggling his Senate work with coordination with the incoming Biden administration. He’d already spoken to Steve Ricchetti and Ron Klain, two of Biden’s top aides, while carrying on more than a dozen running conversations with rank-and-file Republicans with major sway over Biden’s ambitious agenda. He did not have the same access or influence under former President Barack Obama.

Moreover, Coons’ ties to the president-elect have increased his prominence. Coons noticed that as Biden gained ground, his words carried more and more weight. By the time fall came around, he was taking calls from foreign officials and ambassadors who wanted access to Biden.

All he could tell them was his personal opinion — he wasn’t speaking on behalf of the campaign — because Bidenworld was so careful not to undercut the existing president and his foreign policy.

“I do an interview or go to an event or take a position, some people infer that that means that the president-elect supports this particular thing. And I have to find my way to what’s comfortable,” Coons said. “Whatever you say will be attributed to the campaign and the candidate. I’ve never had that role before or been in that space before.”

If having each statement scrutinized by foreign leaders and journalists as tea leaves from Biden doesn’t come naturally to him, working with the other party does, at least these days. When he made it to the New Castle County Council some 20 years ago, Coons figured Democrats would be his allies and Republicans his foils.