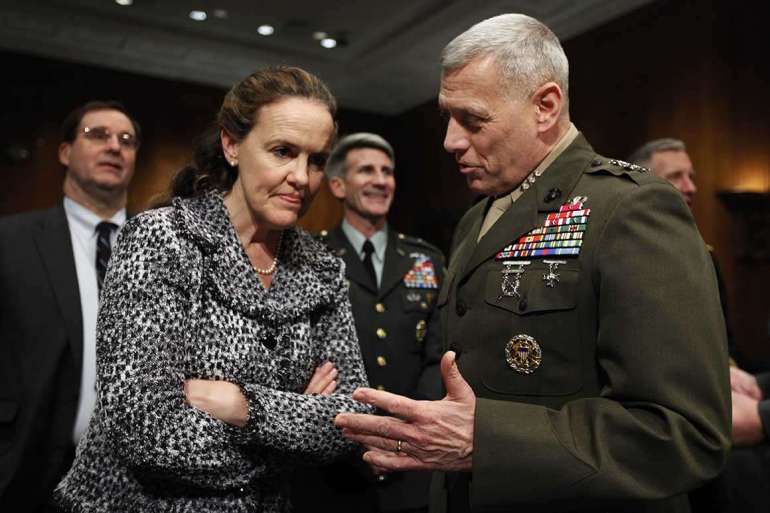 Compounding their frustration is the fact that this is the second time Flournoy has been denied the chance to lead the Pentagon. Flournoy was widely seen as Hillary Clinton’s pick for defense secretary had she won the presidential election in 2016, but her potential nomination was thwarted by President Donald Trump’s upset victory.

“That sound you hear is the dejected silence of women realizing the bar they have to overcome to achieve their ambitions is (once again) higher than men will admit,” Katrina Mulligan, managing director for National Security and International Policy at the Center for American Progress, wrote on Twitter.

True, Biden is making history in another way: If confirmed, Austin would be the first Black person to lead the Pentagon. Members of the Congressional Black Caucus, which had urged Biden to include more Black people in his Cabinet, were among supporters of the choice. But Flournoy backers, while stressing they have no personal beef with Austin, nonetheless said the former undersecretary of defense was the better choice, not merely because of her gender, but because she was the most qualified candidate.

In a statement Tuesday, Flournoy congratulated Austin on his nomination and signaled she may be open to taking a different position in the Biden administration.

“General Austin is a colleague and friend, and I know he will bring his impressive skills to bear to lead all those who volunteer to defend our country, military and civilian, at this critical moment in our nation’s history,” Flournoy said. “I look forward to helping him and the President-elect succeed in any way that I can.”

But some pointed out that Austin faces hurdles that would not have arisen with Flournoy. For starters, he will need a congressional waiver to take the job because he has not been out of uniform for the required seven years, a result of rules designed to ensure civilian control of the military. While Democrats went along in giving such a waiver to retired Gen. Jim Mattis to serve as Trump’s first defense secretary, some vowed not to make such an exception again anytime soon.

Democratic Rep. Elissa Slotkin of Michigan noted those concerns Tuesday morning in a Twitter thread, writing that “choosing another recently retired general to serve in a role designed for a civilian just feels off.”

“After the last 4 years, civil-military relations at the Pentagon definitely need to be rebalanced,” wrote Slotkin, a former CIA analyst. “Gen. Austin has had an incredible career — but I’ll need to understand what he and the Biden administration plan to do to address these concerns before I can vote for his waiver.”

The decision to tap someone from the ranks of retired military brass could also undermine Biden’s message that he will put diplomacy at the heart of his foreign policy, others said.

“If Biden wants to deemphasize the military, nominating a 4-star so recently retired that he needs a congressional waiver appears to send [the] opposite message,” Rosa Brooks, a Georgetown University professor and former Pentagon official, wrote to POLITICO. “I believe he is being badly advised on this, and that this decision will (and should) face substantial pushback in the Senate.”

In recent days, many women and men in national security circles have signed on to letter-writing and Twitter campaigns urging Biden to choose Flournoy, who had long been the rumored frontrunner for the Pentagon job. The rally behind Flournoy began after Biden did not put forth a defense nominee when announcing other members of his national security team last month. At the time, POLITICO reported that Biden was not sold on her for the job.

Yet Flournoy supporters said she was easily the most qualified person for the job — she served in the Pentagon and has extensive knowledge of defense policy in both the private and public sectors. But people close to the transition said Biden never developed the kind of strong personal relationship with Flournoy that he has sought in his Cabinet picks, and thus wanted to consider alternatives.

Some observers wondered whether Flournoy’s resume and reputation damaged her standing among Biden and his aides — that perhaps she was too experienced and connected, and that would have given her sway that could have rattled others.

Flournoy and Biden have clashed over policy issues, including her support for the Obama administration’s surge of troops into Afghanistan, a move Biden opposed. At the time, then-national security adviser Tom Donilon, who now advises Biden, was incensed by the way Flournoy sided with the Joint Chiefs of Staff in their push to surge troops, according to one former defense official.

“She really advocated for departmental policy [and] she would not be beaten down to accept where [Donilon] was coming from,” the person said. “There was no love lost there.”

As the top commander of U.S. forces in Iraq, Austin initially argued for keeping several thousand troops in the country to train the fledgling Iraqi military. But the Obama administration, for reasons including frustrations in negotiations with Iraq’s government, ultimately prevailed, withdrawing all the troops by the end of 2011. That decision would later be blamed for the Islamic State terrorist group’s rise in the region.

Austin did get support from several prominent women. On Tuesday morning, Susan Rice, a former Obama national security adviser, tweeted that Austin was “a strong leader, a kind man of decency, principle and integrity,” and that “this country will benefit yet again from his service.”

Rice, who also is Black, was herself passed over by Biden for the role of secretary of State amid concerns about her ability to obtain Senate confirmation.

Some progressives had raised concerns about the possibility of Flournoy leading the Pentagon, pointing to her ties to the defense industry. Flournoy co-founded a think tank, the Center for a New American Security, and a consulting firm, WestExec Advisors, both of which take money from defense contractors. She’s also on the board of Booz Allen Hamilton, a management and information technology consulting firm.

But the general mood among progressives was simply to voice concerns about Flournoy, not to oppose her. It’s unlikely that Austin, with his military background and membership on the board of defense company Raytheon Technologies, will ease worries among progressives about the militarization of U.S. foreign policy.

One Flournoy supporter called the overall narrative about Biden’s decision to sideline Flournoy “demoralizing,” saying it was reminiscent of the disdain shown by Trump and his aides toward experts in various fields including national security.

“The message this decision sends is that you can still be the most qualified person in the room and be passed over precisely because your experience, relationships, and dedication to the field are seen as a liability,” the person said.