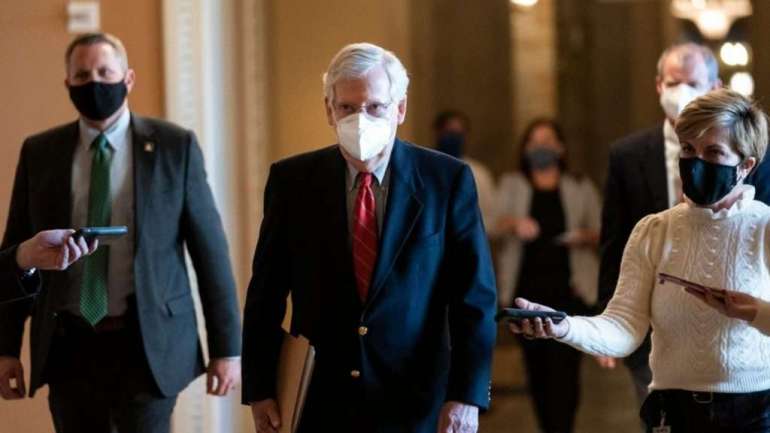 McConnell has long called a liability shield his “red line,” while Democrats have rejected his legislation that hasn’t included state and local assistance. The GOP leader suggested those fights can continue next year, given the likely need for another package, first telling his members his view in a conference call and then delivering remarks to the press about a possible compromise.

But any hope of breaking the deadlock by dropping contentious provisions seems to be a pipe dream. Schumer warned that leaving out state and local aid would lead to sweeping public sector lay-offs and scoffed at the idea McConnell was trying to compromise.

“State and local funding is bipartisan unlike the extreme corporate liability proposal Leader McConnell made which has no Democratic support,” Schumer told reporters. “Sen. McConnell is trying to pull the rug out from beneath the Gang of Eight” negotiators.

McConnell’s remarks come as a bipartisan group of lawmakers is seeking to finalize language for a $908 billion coronavirus relief package. The group is expected to begin releasing summaries of the legislation Tuesday and has made significant progress on the $160 billion state and local spending.

Both McConnell and Speaker Nancy Pelosi (D-Calif.) have said that coronavirus relief should be included in legislation to fund the government. Both chambers of Congress are set to pass a one-week spending bill to give Congress until Dec. 18 to avoid a shutdown and approve a coronavirus package.

But when Biden is in office, Democrats will keep pushing for a larger package. Whatever ultimately comes together before the holidays won’t be enough to qualify as fiscal stimulus, said Speaker Nancy Pelosi. Congress must pass something “bigger” next year, she said.

Caitlin Emma contributed to this report.