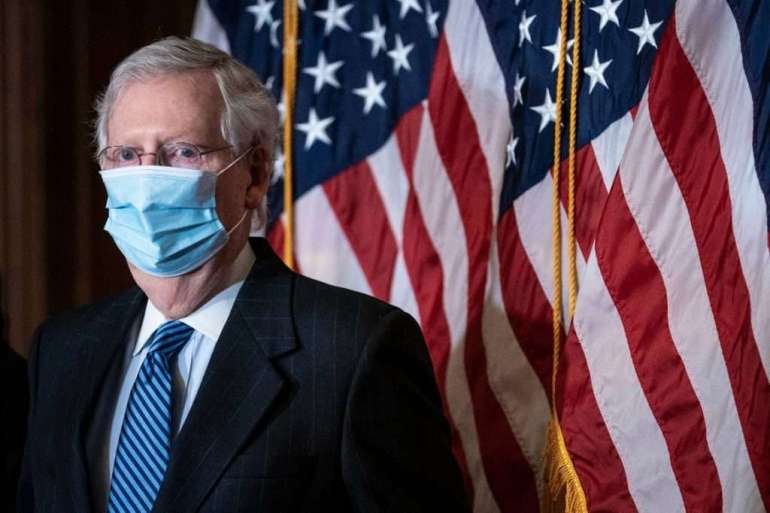 On Tuesday in their private party conference call, Senate Republicans wrestled over whether cutting a deal that trades the two is even doable. Afterward, McConnell urged negotiators to drop liability reform and state and local aid from the discussion, deeming them too contentious to be workable in the breakneck lame duck session.

Retiring Sen. Lamar Alexander (R-Tenn.), a close McConnell ally, was among those on the call speaking against the necessity of spending billions more to help states across the country, according to two people familiar with the call. In an interview, Alexander said states like his own didn’t need the aid after an uptick in revenues: “Our target should be on schools, colleges, child care and individual relief. Put money in the pockets of people, not the states.”

Some Republicans are resisting approval of any money that would go to blue states.

By Wednesday morning, the divisions among Republicans about the $908 billion bipartisan proposal meant that influential GOP senators believed the discussions needed to be kicked up to party leadership, not left to rank-and-file senators.

“This is going to be negotiated by the four corners,” said Sen. John Cornyn (R-Texas), referring to top party leaders. The bipartisan group has “come up with some ideas and I think there are many things that they’re talking about that could be put in the [spending bill], but the fact is we’re not going to have a standalone Covid 19 bill.”

Both McConnell and Speaker Nancy Pelosi have said coronavirus assistance should be included in an end-of-the year spending package. But that’s about where their agreement ends.

“One way or another we’ll get it done,” Pelosi told reporters Wednesday. Then Pelosi quickly dismissed a question from reporters about GOP senators saying she needs to meet with McConnell and hammer out a deal.

“Is that what they think? Good for them,” Pelosi said. “Tell them to go meet with McConnell.”

The bipartisan group of lawmakers released its framework on Wednesday morning on spending for education, health care, transportation and small businesses, though it offered few details about how to bridge partisan gaps over the liability shield and money for local governments. In the coming days, the group hopes to produce legislative text but was still negotiating liability provisions late Wednesday.

Sen. Joe Manchin (D-W.Va.), a leader of bipartisan talks, said that if Republicans shun the group’s work product then “they have to answer to the American public.”

“I think there’s enough Republicans who say, ‘wait a minute, this ain’t gonna work,’” Manchin said. “We’re the only bipartisan game in town.”

Sen. John Thune (R-S.D.) said that the bipartisan group had kick-started negotiations. But he said that talks between McConnell, Pelosi, Senate Minority Leader Chuck Schumer and House Minority Leader Kevin McCarthy are going to be conclusive — not whether a group of senators can clinch an agreement among themselves that badly divides Senate Republicans.

“The most dilutive aspect of any of these proposals to our vote total in the Senate among Republicans is state and local. There’s no question about it. That bleeds Republicans,” said Thune, the party’s chief vote-counter. “Having state and local funding in there would be highly problematic.”

But party leaders in both chambers have spent more time publicly trashing each other’s ideas than anything else. Pelosi and McConnell spoke last week about the need for a bipartisan deal, the first meaningful discussion between the two on the issue in weeks. Staff has spoken more recently, congressional aides said.

Since then, it’s mostly been finger pointing between the two leaders — Pelosi calling McConnell’s proposal Tuesday “appalling” and the Kentucky Republican returning fire, saying Wednesday that her and Schumer’s reaction to Tuesday’s White House offer of $916 billion in aid was “schizophrenic.”

And Democratic leaders have continued to push the bipartisan talks as the only viable path forward, panning McConnell’s proposal to drop negotiations over state and local funding and dismissing Treasury Secretary Steven Mnuchin’s offer, as well. After McConnell accused Schumer of not accepting recent counter-offers, Schumer said “everything Leader McConnell has done has been just partisan, same with the White House, but this bipartisan group has real hope.”

House Majority Leader Steny Hoyer reiterated his support for the bipartisan talks Wednesday, but also acknowledged that time is running short to get an agreement. “We need to get this done,” Hoyer told reporters. “And whatever it takes, whether it’s Speaker Pelosi and Leader McConnell, in a room, coming to grips with an agreement.”

Republican officials questioned just how many of their members would support a short-term liability shield in exchange for $160 billion for local governments. Some worry fewer than half the Senate Republicans are inclined to support a deal based around that exchange.

Even if the $908 billion deal loses a significant bloc of Senate Republicans, Democrats say it would still pass the Senate’s 60-vote threshold. And with time running out on the lame duck session, they say that’s the best — and only — play.