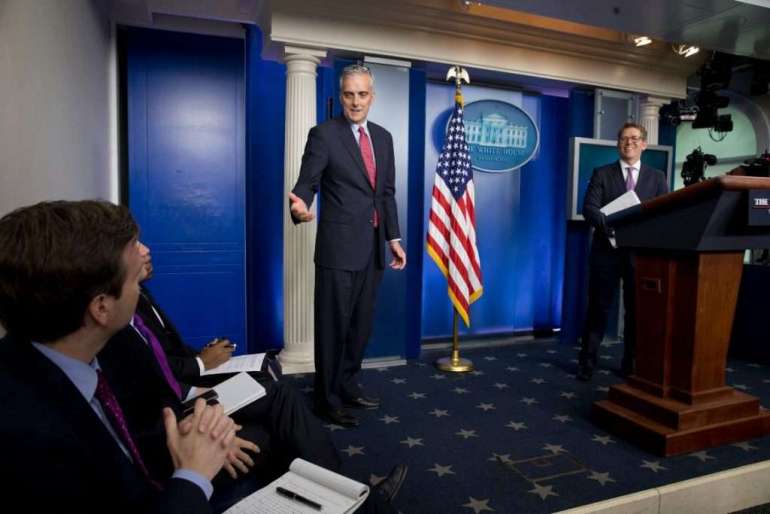 Biden picked McDonough because he felt he was crisis-tested and knows how to pull the levers of government, according to a source close to the transition. Biden was also impressed by McDonough regularly visiting Walter Reed National Military Medical Center and making a point of visiting troops in the field while he was deputy national security adviser under Obama.

“When I received the call from President-elect Biden, I assured him that I will represent the voices of all veterans at every level, on every issue, every day,” McDonough wrote on Twitter following the announcement. “Those who have served this nation, their caregivers and survivors should expect nothing less.”

But Biden’s decision not to tap a veteran for the job surprised veterans service organizations and leaders who expected the president-elect to continue a tradition of having a war veteran lead the VA. McDonough was a longtime Capitol Hill staffer before he joined the Obama campaign in 2008, and he then served in various foreign policy roles in the White House before becoming chief of staff.

“It’s a shockingly out of touch pick … they could have selected someone who’s been a patient there or has any direct experience with that community,” said Paul Rieckhoff, founder of the Iraq and Afghanistan Veterans of America. “The idea that Biden couldn’t find a qualified candidate among the more than 3 million veterans feels exceptionally patronizing.”

“We have a lot of veterans who still have trouble trusting the VA,” said Joe Chenelly, national executive director of AMVETS. “I’m not sure that having someone at the helm who’s not a veteran is going to be helpful in the near term.”

Chenelly also noted concern that McDonough does not appear to have “much experience with the intricacies of the VA.”

“Although the VA central office and the White House are just across the street from each other, it’s a big distance when it comes to knowledge of what’s happening on the ground,” he said.

Some veterans service and labor organizations said they had not been consulted with about the decision in advance, a disappointment after four years during which they felt frozen out by the Trump administration. While not directly criticizing McDonough, one person involved with an outside organization said the process that led to his nomination “was left wanting” given the lack of communication.

LGBTQ and minority veterans had also been organizing support behind Murphy, an Iraq War veteran who introduced and championed the push to repeal the “Don’t Ask, Don’t Tell” policy while in Congress in 2010.

“We’re just now crossing the 10-year anniversary of the repeal … and so a lot of those service members who were able to serve openly, and have been serving openly since then, are now themselves becoming veterans and looking for services from the Veterans Administration,” said Zeke Stokes, a former chief programs officer with GLAAD who this week organized a letter to the transition in support of Murphy, which was signed by more than 150 LGBTQ and minority veteran leaders.

“Knowing that there’s someone there who has been in the fight with them as a veteran, and someone who is a demonstrated LGBTQ ally, I think is something they are looking for,” Stokes said.

David Shulkin, who served as under secretary of Veterans Affairs for health during the latter part of the Obama administration and then became secretary under Trump, said McDonough is “going to have a big learning curve on specific issues when it comes to the VA” if he is confirmed.

“But he knows how the deal with the complexity of Washington and how to get things done and that’s a good sign for the VA,” Shulkin said.

McDonough did not immediately respond to a request for comment.

As head of the agency, McDonough will be tasked with implementing one long-term, large-scale project high stakes: overhauling the VA’s medical records system to a new, private-sector system designed by Kansas City-based Cerner. The replacement system would mesh with the one Cerner is building for the Defense Department and also connect with private sector health providers’ electronic health records.

Initiated by Trump White House adviser Jared Kushner, and budgeted for $16 billion over 10 years, the project is widely expected to take longer and cost more to implement. Whether or not it’ll achieve its stated goal — making sure service members’ medical records follow them from enlistment, post-discharge, and through the sprawling Veterans Affairs’ system — remains to be seen. The Cerner VA system has already taken its first baby steps, rolling out its records in Spokane, Wash., after several delays.

Since leaving the White House, McDonough has been teaching classes at the Keough School of Global Affairs at the University of Notre Dame. He has also been overseeing the school’s Presidential Transition Index that is tracking the Biden transition.

One former Obama administration official who served with McDonough said it “speaks very highly of him that he’s willing to go into that bureaucracy — some might say morass.”

“A lot of people do really good work there, but you have to cut through layers of red tape and disappointment,” the person said. “McDonough is like an ascetic — a holy man in that he is almost a glutton for punishment.”

Alice Miranda Ollstein and Darius Tahir contributed to this report.