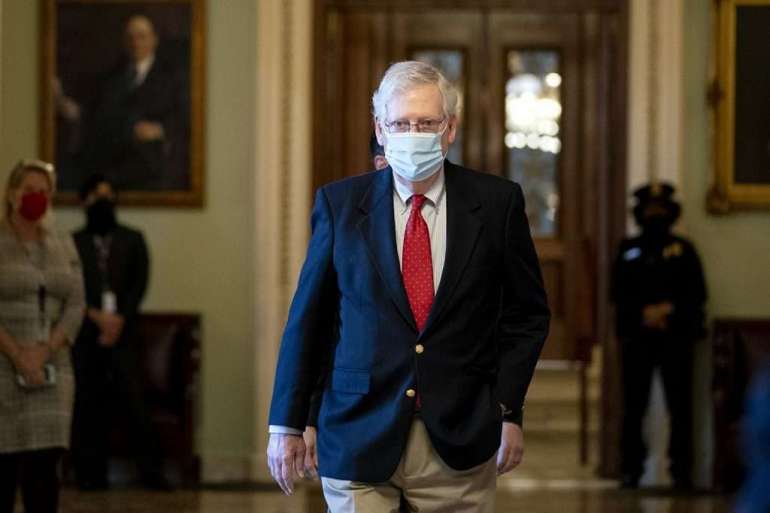 Thune confirmed the ongoing bipartisan talks focusing on a $908 billion proposal are “a different negotiation than what’s happening right now at the so-called big four level” — a reference to the four congressional leaders.

“I’m just hoping we get there and I think we will — I think we’ll get something,” he said.

The move to draft text for at least some stimulus relief comes after bipartisan efforts to reach a deal took a hit Thursday as the stalemate between House Speaker Nancy Pelosi and Senate Majority Leader Mitch McConnell continued.

McConnell has continued to insist party leaders set aside their disagreements on state and local funding as well as liability protections for businesses and pass a more targeted relief proposal. But Pelosi and Senate Minority Leader Chuck Schumer, have dismissed that idea, saying local governments are desperately in need of additional relief.

In a sign of how far apart things remain to reaching a broader deal, McConnell and Schumer took to the Senate floor Friday morning to ding each other for the ongoing impasse.

“We know what common ground looks like,” McConnell said, ticking off another round of small business relief, funding for vaccine distributions and an extension of unemployment provisions set to expire later this month. “Day after day, the Democratic leader finds new reasons not to compromise, new ways to avoid taking yes for an answer.”

Schumer countered: “Now it’s December and we still, because of the leader’s intransigence, have nothing of significance to help the American people during the worst economic crisis in 75 years,” he said.

Congress has only days to reach agreement on a coronavirus relief measure in order to attach it to a $1.4 trillion omnibus package that must pass by Dec. 18 in order to avert a government shutdown. Both Pelosi and McConnell have said the best — and likely only way — to get a stimulus deal in the waning days of this Congress is by attaching it to the omnibus.

Pelosi on Thursday left the door open to keeping Congress in session up until Christmas or beyond if that’s what it takes to reach a deal.

In addition to the committee negotiations over noncontroversial relief items, bipartisan negotiators are also pressing on over the remaining hurdles to a larger deal. They’re beginning to draft $160 billion state and local aid language even though McConnell has signaled that Republicans likely won’t support a deal marrying that with a liability shield. Sen. Mitt Romney (R-Utah) suggested the group may need to leave the two major sticking points until next year, though Sen. Susan Collins (R-Maine) said the group isn’t giving up yet.

“These problems don’t go away. If anything they just get bigger. So if we can just stick to it, get a proposal that we can advance that resolves not only goals like unemployment, PPP, food security, but also the state and local and tribal and the liability issue — this is what we’ve been working on. This is what we need to keep doing,” said Sen. Lisa Murkowski (R-Alaska).

The rogue group of Senate centrists has provided something of an outline of what can pass to boost health care spending, extend unemployment insurance benefits and send schools more money. But this latest push to draft at least some legislative text for coronavirus aid to ride on a massive spending bill could end up being the last real chance a coronavirus relief deal comes together before next year.

The committee discussions come as the pandemic continues to crush the U.S. with nearly 300,000 Americans dead and the economy faltering.